Our congratulations to Joanna Kusiak on being awarded the 2019 Best Article Award of the International Journal of Urban and Regional Research for ‘Legal Technologies of Primitive Accumulation: Judicial Robbery and Dispossession-by-Restitution in Warsaw’. The prize is awarded for ‘the article that makes the most original and outstanding contribution to the journal’.

The full article, which examines the role of the law in property restitution, can be accessed via the IJURR website here. The abstract can be read below. 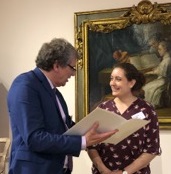