It is thought that there were two organs in King's College Chapel as early as the 1530s. Records show that two small organs were moved from a temporary Chapel used during the construction of today's Chapel.

At least one of these organs was then removed in 1570 at the orders of the Commissioners of Queen Elizabeth and the pipes were sold by Roger Goad (Provost, 1570-1610).

On 22 June 1605, the renowned organ builder Thomas Dallam began work on a new organ in the Chapel. The accounts for his work have survived, showing in detail the materials and hospitality provided by the College while the work was done.

The order for this new organ, totalling £370, was considered so important that Dallam closed his London factory and took his men to Cambridge, where they worked for fourteen months. It is believed that around 25 years later this organ was moved from the East End of the Chapel and mounted on top of the screen.

Although the Long Parliament ordered the removal of the pipes half a century later the wooden case was left intact, mounted on what is one of the finest Renaissance screens in the country. 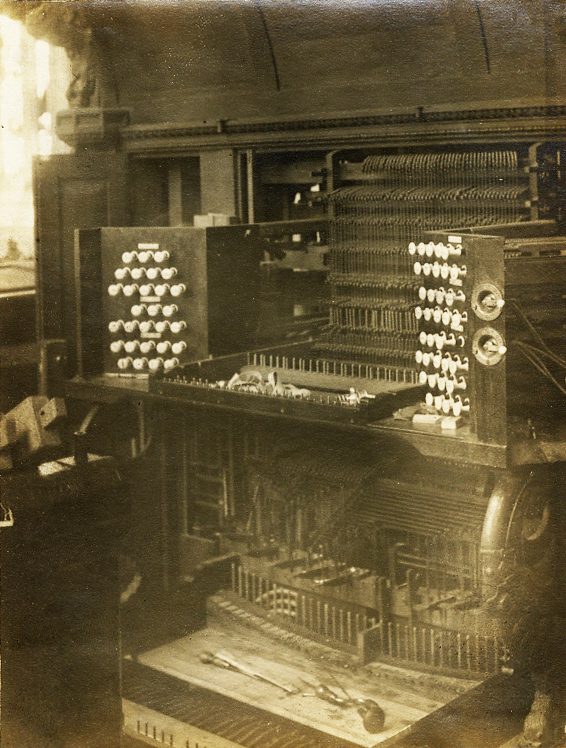 In 1934 the organ was enlarged and rebuilt in its present form by Harrison & Harrison, with some of the Hill pipework retained and re-voiced. The specification, drawn up in consultation with Boris Ord (Organist 1929-57), included separate mutations on the Choir Organ, unusual in England at that time.

Minor changes were made in 1950, when the Pedal Fifteenth and Mixture were added. In 1968 the organ was overhauled and several new stops were provided (11, 12, 22, 48 and 50), four old ranks being displaced. Further restoration work was carried out in 1992, when the console was renovated and the electrical system modernised. Further essential repairs took place in 2003 and 2009, during which it became clear that a major restoration would be needed.

There is some uncertainty about the history of the wooden case, which is one of the oldest in England. While it has traditionally been thought that the main case survives from the original Dallam organ of 1605-6, it is more likely that only some decorative components may originate from that time. Its current form is more likely to be a contemporary of the Choir case, which dates from 1661.

The front pipes were originally coloured and patterned; the plain gilding dates from the eighteenth century. In 1859 the main case was increased in depth to accommodate the enlarged organ, the console being moved from between the main and Choir cases to its present position on the north side.

Today, the Great and Swell Organs and the Tuba occupy the main case, facing east; the Choir Organ is at the lower level behind the Choir case; the Solo Organ and most of the Pedal stops are placed within the screen on the south side.

Recent Major Work on the Organ 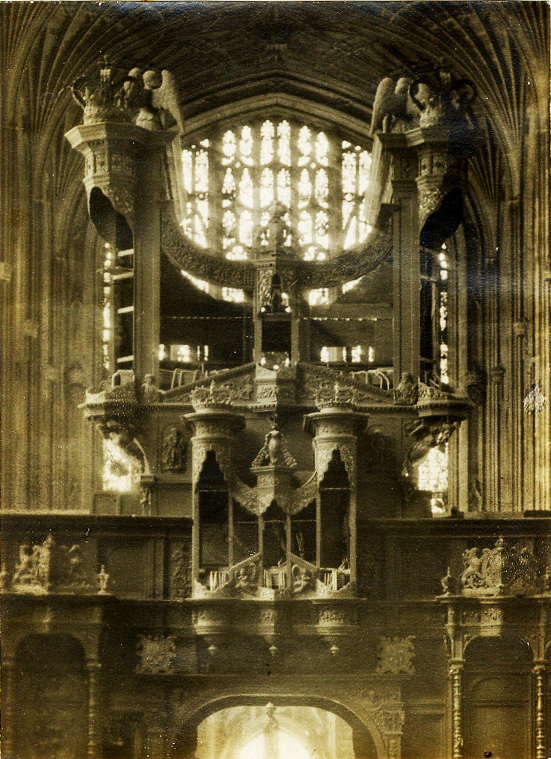 Rebuilt and enlarged by Harrison & Harrison.

Significant overhaul, including re-leathering, the replacement of the Great power motors, and the addition of six new stops.

Essential repairs, including replacement of the pedal board, leak repairs and pipework maintenance.

Three front pipes in the northwest tower of the organ case were repaired and reguilded. These pipes, which are thought to be at least 300 years old, were collapsing under their own weight. They are no longer speaking pipes, so their deformation had not affected the sound of the organ; but it was obvious to the eye, and in time would have presented a hazard.

Major overhaul was expected to be needed in 7-10 years’ time.

Selective work in February 2009 involved three areas of the instrument: front pipes, some internal pipework, and the console.

Three front pipes in the southwest tower, collapsing under their own weight, were repaired and reguilded in the same way as work to other front pipes in 2003.

A ‘stepper’ system was added to the console. This electronic system provides conveniently located stepper pistons that advance through the various combinations of stops that have been selected on the general pistons.

The memory system of the console was upgraded so that the eight general pistons now have 512 levels of memory and the divisional pistons have 16 levels.

The keyboards and Pedal toe sweeps were removed to make changes to the piston layout. At the same time the opportunity was taken to overhaul the four keyboards.

In 2016 the organ underwent the most significant restoration in a generation. Read more about the 2016 restoration, by visiting the Organ Restoration page in the See Also section below.

In 2016, the King's College Chapel organ underwent the most significant restoration since the 1960s.
Read more

The King's College Chapel is a splendid example of late Gothic architecture and has the largest fan vault in the world.
Read more

The King's College Chapel is a splendid example of late Gothic architecture and has the largest fan vault in the world.
Read more
Organ Specifications