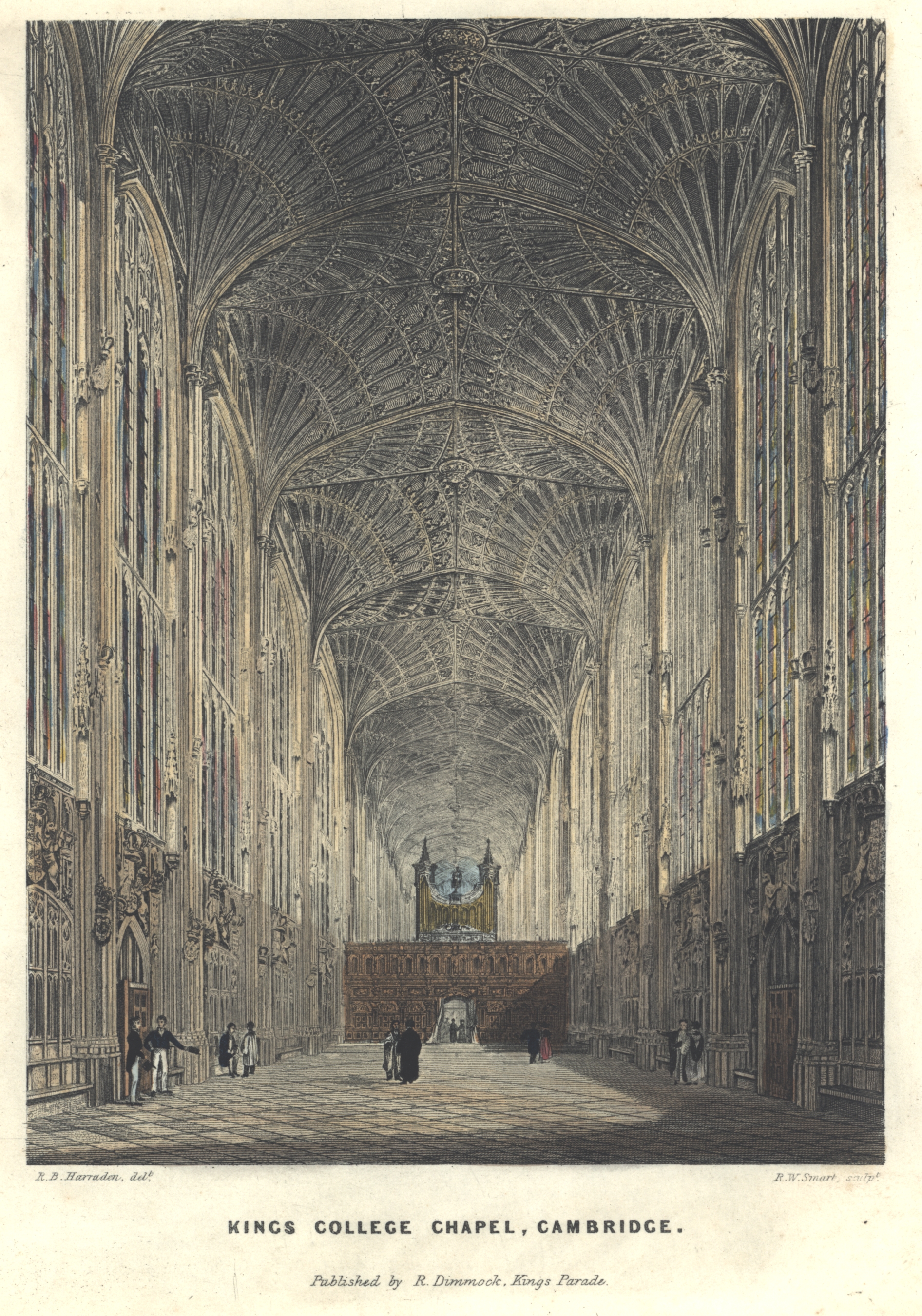 Religion has influenced College life and architecture ever since its foundation in 1441. King Henry VI founded the 'College roial of Oure Lady and Seynt Nicholas' from a deep and genuine sense of piety. After his death he was venerated as a saint, and although he was never canonised, the Chapel, which is substantially as he designed it, reveals the Founder's belief in a glory other than his own. The significance of religious faith to the construction of the buildings is seen in the fact that foundation stones of the College and Chapel were laid on major festivals of the Church: on Passion Sunday 1441 and on the feast of St James 1446.

Although daily attendance at Chapel ceased to be obligatory for college members in 1912, worship remains the main purpose and use of the Chapel. Choral Evensong, early morning services, marriage and baptism ceremonies, memorial commemorations, ensure that worship continues in the vibrant and holy place which the Founder intended.

Origins of the Choir

Henry VI expected that music should ornament the services in the Chapel, and stipulated that choristers should sing daily. As John Saltmarsh wrote, 'The Founder's Statutes were modelled on William Wykeham's statutes for New College, Oxford. The College was to consist of a Provost, seventy fellows and scholars, ten chaplains, six clerks or singing-men, and sixteen choristers, (King's College: A Short History, Cambridge, 1963, p.18).

With the exception of one period, when choral services in the Chapel were suppressed by the Puritans, the choir has been singing services continuously for over 500 years, the choir being older than the Chapel as it was established when Henry VI founded the College in 1441. Although the lay clerks have now been replaced by choral scholars, the number of choristers has remained unchanged since the 15th century.

A Festival of Nine Lessons and Carols

The Festival of Nine Lessons and Carols was first introduced by Dean Eric Milner-White on Christmas Eve 1918. He used a form of service created by Bishop E.W. Benson in 1880 for his new cathedral at Truro, which at that time was little more than a wooden shed. Bishop Benson himself used a liturgical custom dating back to the Middle Ages, when the greatest feast days were marked by a series of nine Lessons. After the first imitation of the Truro service, Milner-White made changes for Christmas Eve 1919 by increasing the number of carols from four to nine, and introducing the Christmas Bidding and Lord's Prayer. The 1918 service booklet is available to download as a pdf from the link below.

Since 1919, the service has always begun with the hymn, 'Once in Royal David's city', but tradition is mixed with innovation as new carols are commissioned, new arrangements are given to traditional words, and little known carols are revived. The service was first broadcast in 1928, and since 1963 a shorter service has been filmed periodically for television.

Dean Eric Milner-White's account of the origin of the carol service (ref. Coll. 21.1) '… the liturgical order and pattern [of the nine Lessons] is the strength of the service, and prevents it becoming a recital of carols rather than an act of worship. For it is fatally easy to weaken and ruin the devotion, to make it mere community carol singing, by reducing the number of Lessons and doubling the number of carols. As it stands, the service is a fruitful example of the use of ancient forms in a new combination to create a true Christmas devotion, with dignity of order, development, mood, colour, action and variety of parts, all concentrated upon the coming of our Lord Jesus Christ.'

The Archive Centre holds Orders of Service, some originals and some only as photocopies, in an unbroken sequence from 1918. Recent Orders of Service can be read on-line. Such a long series means that the individual records become a register of social change in the world beyond: in the example from 1940 we can read the evacuation procedures in case of an air raid; in 1993 the request, 'Please turn off chiming digital watches', is seen for the first time; and in 1997 this was expanded to embrace new technology, 'Please turn off chiming digital watches and mobile phones'.

Special services include Good Friday and Maundy Thursday services as well as the commemoration of significant events such as the coronation of Queen Elizabeth II on 3 June 1953, and the visit by the Dalai Lama on 5 May 1993.

Memorial services are held in the Chapel to commemorate the lives of King's Fellows, or individuals closely associated with the College. Orders of service held in the Archives date back to 1905, and include those for A.C. Benson, Roger Fry, M.R. James, John Maynard Keynes, Lydia Lopokova Keynes, Joan Robinson, and Edmund Leach.

The Reformation at King's

On Easter Day 1548 – Sunday 1 April – John Cheke was formally admitted as provost of the King's College of Our Lady and Saint Nicholas in Cambridge. Cheke's admission, like the admissions of his predecessors Edward Foxe and George Day, is recorded in the College Archive's Protocollum Book. Cheke's entry is exceptional, because written below the standard Latin record of admission is a text in English. Cheke did not write the paragraph (it is probably the work of a local notary public) but it has some important things to say about Cheke's provostship and the part the new provost expected King's to play in the national Reformation of England. The final paragraph shown here says:

ffirst of all I doo proteste & declare that otherwise I do not Swere or promyse any thyng therby that shulde bynde me contrary to the trewe doctryne of the Church of England or contrary to the reformyng or better order of the Colledge nor that maye derogate in eny wise the Kynges maiesties auctorite or shal derogate dymynsh or be contrariouse to such facultye liberte or licence as the Kynges highnes alredy hath gyven me or herafter shall of his Kynglye power gyve me.

In April 1548 England had not yet been introduced to the first Book of Common Prayer – its promotion was eleven months away. Nevertheless, the Protestant reformation of the realm had begun a year earlier, guided and protected by royal authority. Archbishop Thomas Cranmer promoted his reforming Homilies in the summer of 1547. The regime issued Injunctions for ecclesiastical visitations by royal commissioners. Religious images were smashed and defaced. So on Easter Day 1548 Cheke swore to maintain – and I suspect also to promote – this kingly reformation; and he did so as provost of a royal foundation clearly and visually associated with the power of the Tudor dynasty. 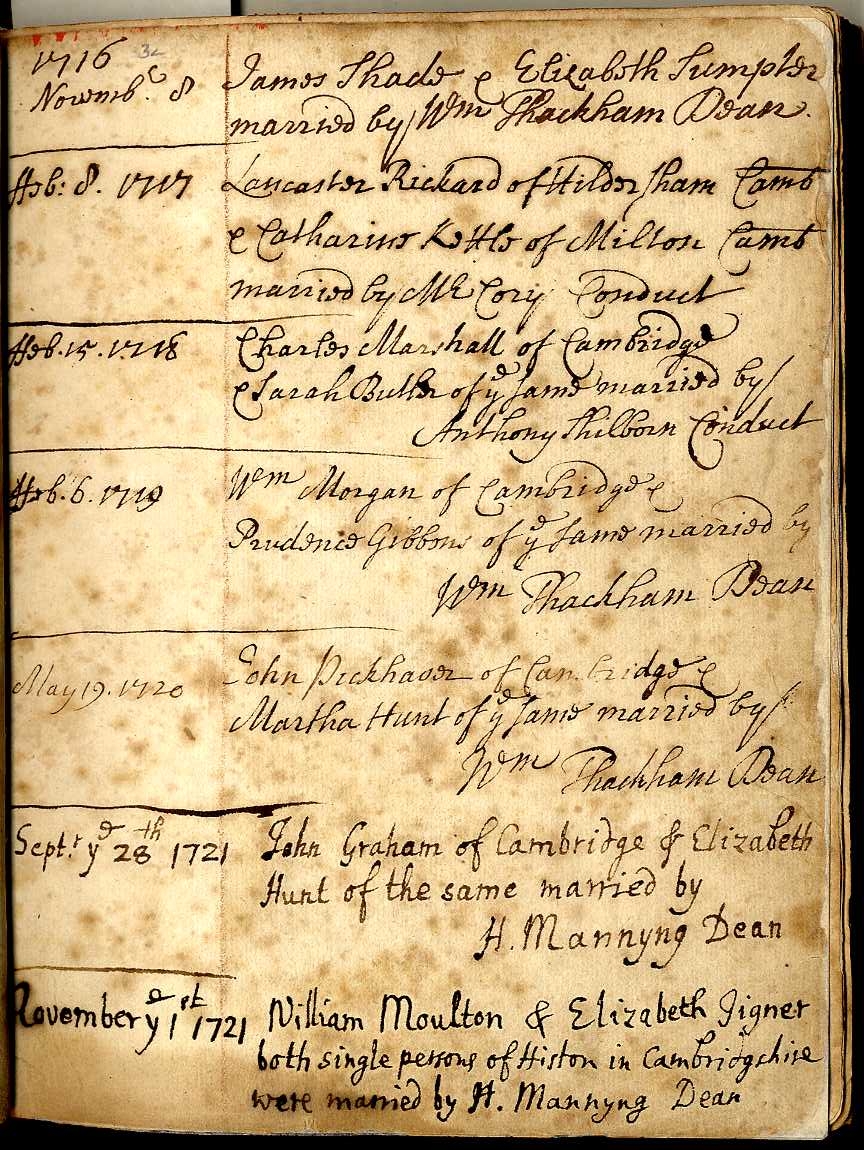 A page from the register of marriages, baptisms, burials and confirmations held in King's College Chapel.

A page from the register of marriages, baptisms, burials and confirmations held in King's College Chapel. (reference: CSV/121)

The Altar before Rubens

The arrangement of the East end of the Chapel has altered over the years. This photograph shows dark wooden panelling and steps up to the altar. In 1961 'The Adoration of the Magi', painted by Sir Peter Paul Rubens in 1634 for the convent of the White Nuns at Louvain in Belgium was presented to the College by Maj. A.E. Allnatt with the idea that it should once again be an altar-piece in a great church. During the next seven years, work was undertaken to remove the panelling and lower the floor level so that the work of art was positioned below the beautiful stained glass of the East window.

Seven years after Major Allnatt presented Rubens' masterpiece to the College, alterations to the East end of the Chapel were complete, and the canvas was ready to be re-framed and hoisted into position. The College Archives hold a range of records relating to the installation of the 'Adoration of the Magi', including Domus Bursar's files relating to alterations to Chapel fabric and furnishings, 1963-69, and the Deed of Gift from Major Allnatt to the College, 21 November 1961.

Photographs showing the placement of the 'Adoration of the Magi' by Sir Peter Paul Rubens in the east end of the Chapel, 1968. Photographs © Edward Leigh.

Records of the manors passed to the College, and the records of 164 estates in 30 counties are held in the College Archives.
Read more

From masons' marks carved into the stonework of the Chapel to architectural plans and workmen's bills.
Read more
A Festival of Nine Lessons Order of Service (1918)