In the two years between founding the College by Letters Patent dated 12 February 1441 and spring 1443, Henry VI had granted, in possession or in reversion, some eleven manors and alien priories and two appropriated rectories, as well as other property. In the next three years, he added another ten manors and priories, and three more appropriated rectories. Most of the College estates were acquired between 1441 and 1453, and were chiefly lands of the alien priories annexed to the Crown. Records of the manors passed to the College, and the records of 164 estates in 30 counties are held in the College Archives.

These records often include court rolls, rentals (which are often very useful for family historians), grants and charters, transfers of title and leases, valuations and terriers, maps and plans, records of any legal proceedings, tithes and taxes, enclosure awards, and general estate administrative accounts and correspondence.

See the Estates Records pages (link at the bottom of this page) for more images from the estates records.

This 'Survey or Mathematicall Description of the village or Libertie of Westgerardston, and places adiacent: Expressing all Landes, Meadowes downes Rivers, Highwayes, and other accidentall Occurrences' is a beautiful and detailed map held among the records of the manor of Chalk, Wiltshire, which also includes Alvediston, Bower Chalk and Broad Chalk. It is important because it contains a list of copyholders with a 1663 endorsement from Chalk Prebend court baron verifying the map's content.

Ruislip was one of the College's largest and most productive estates, in Middlesex. 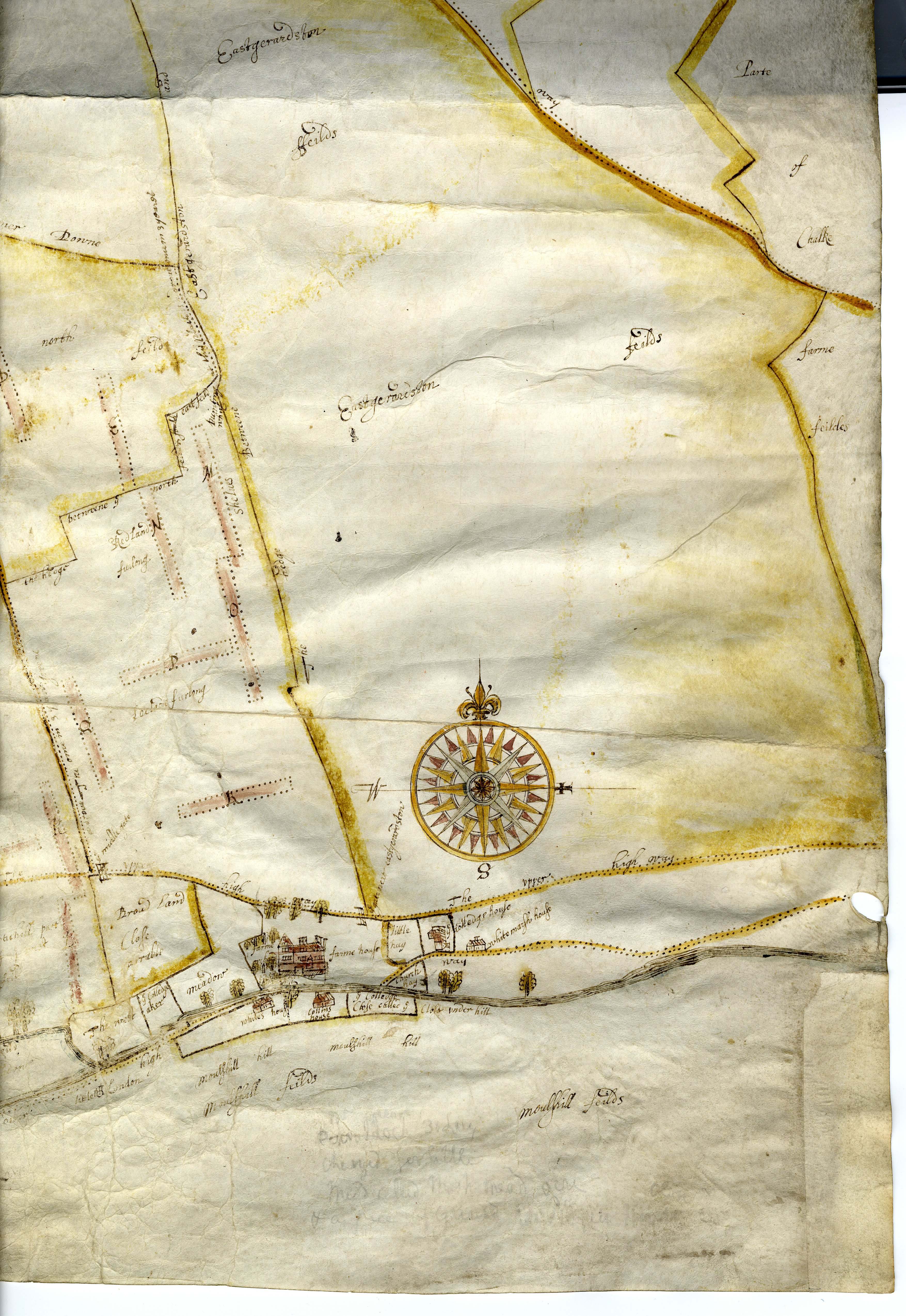 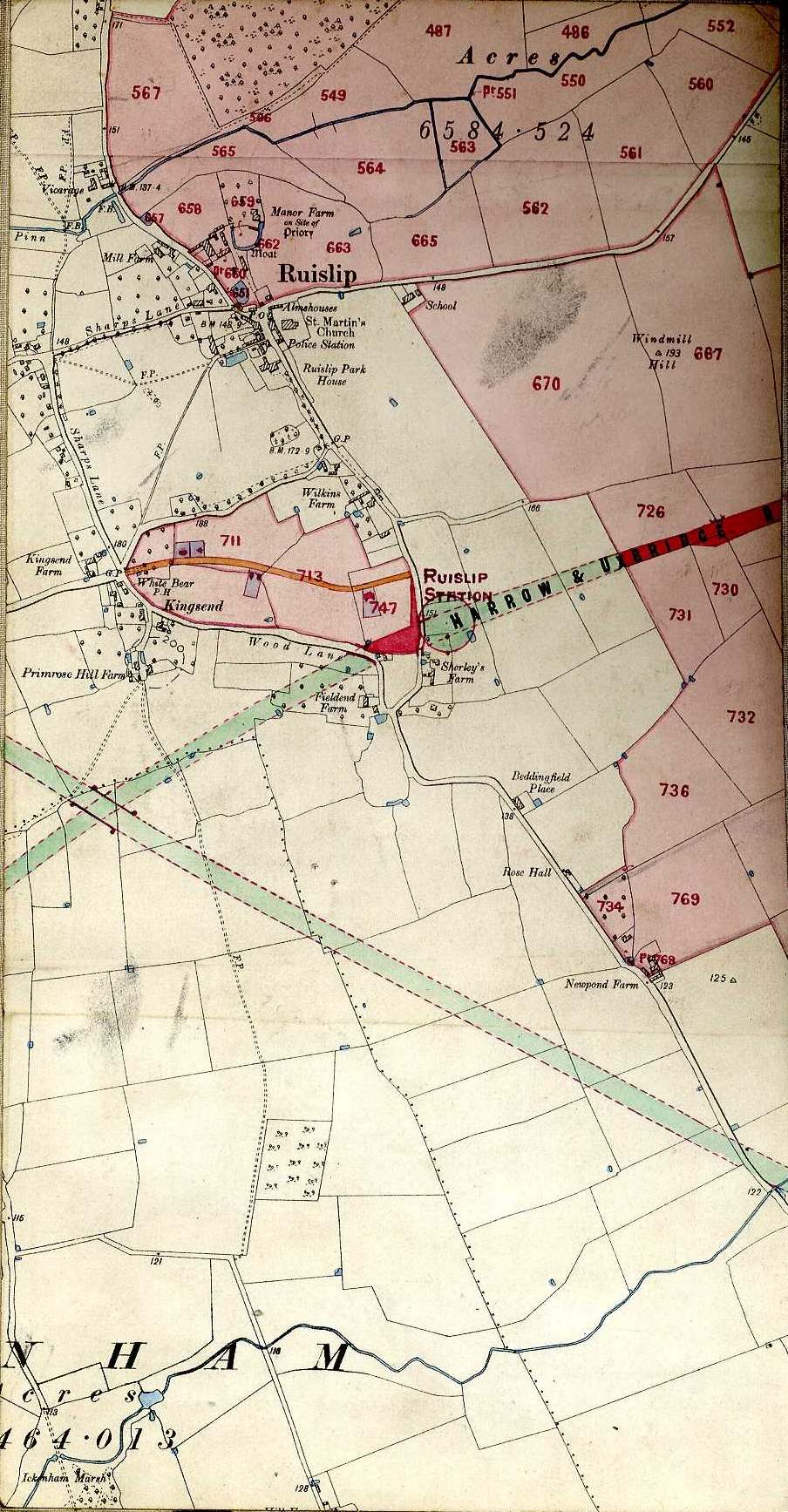 6" Ordnance Survey map of the Ruislip Manor Estate, with property owned by the College shaded in pink. 1894. (reference: RUI/417)

Seals and Charters from Exeter

Grant of Grendel land by Roger, porter of Exeter Castle, who held it from Richard de la Bushee, to St James Priory, Exeter. The seals of both men are appended to the double charter. The seal of Richard de la Bushee is a rebus on his name, and shows a bush. The archives contain many seals attached to charters and other documents, and they constitute a source of historical information in themselves, quite apart from their beauty. 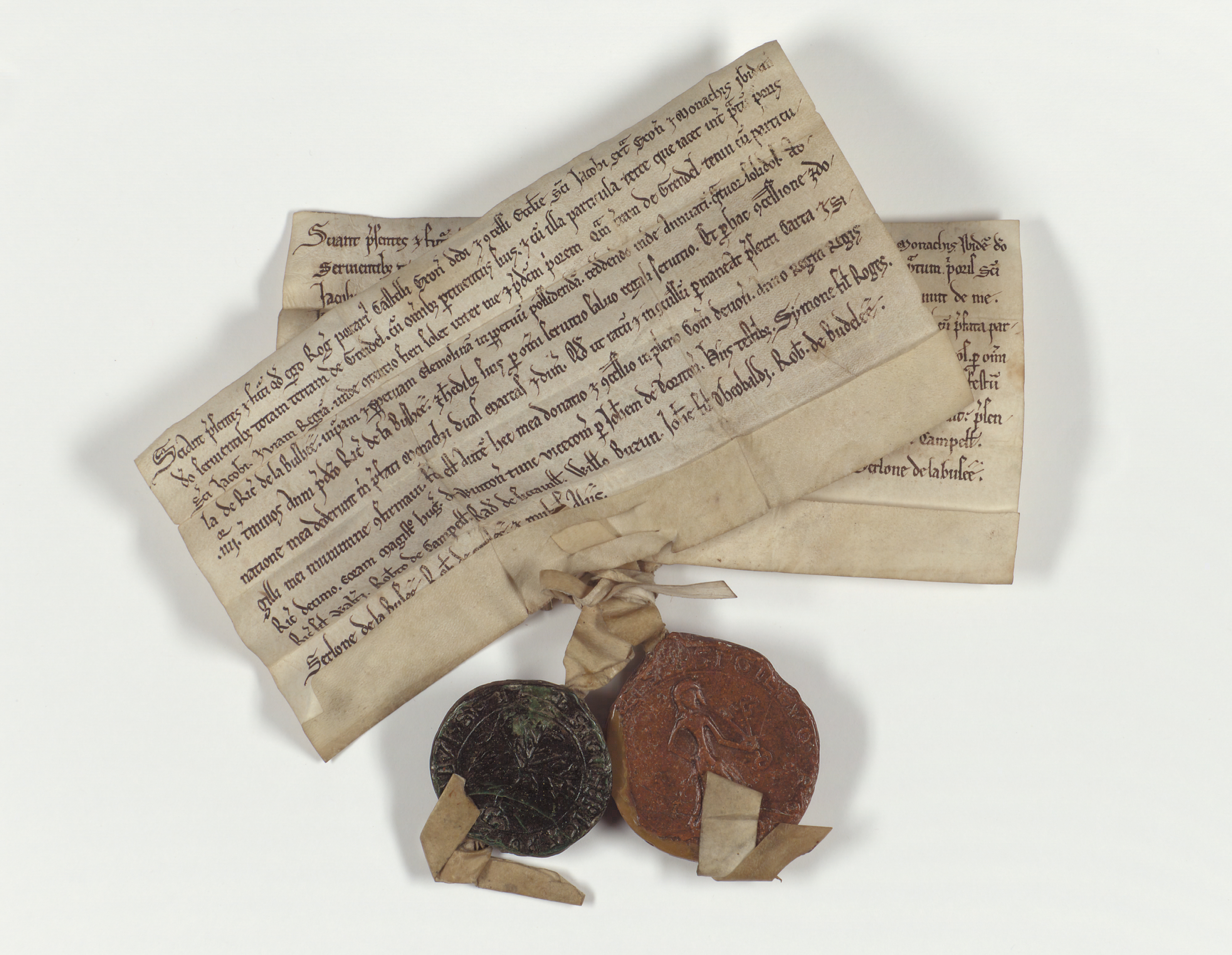 A Court Roll from Dorset

The actions taken by the manorial court are indicated in the left hand margin. The names of the jurors of the court, who are all residents on the manor, are listed. The profits derived from the fines and other actions of the court are indicated at the foot of the roll with the expenses of the steward of the manor who was responsible for enforcing the court's decisions. Court rolls give a detailed picture of transfers of property within the manor, and some idea of the income that went with the lordship of the manor, before and after it was transferred to King's College. 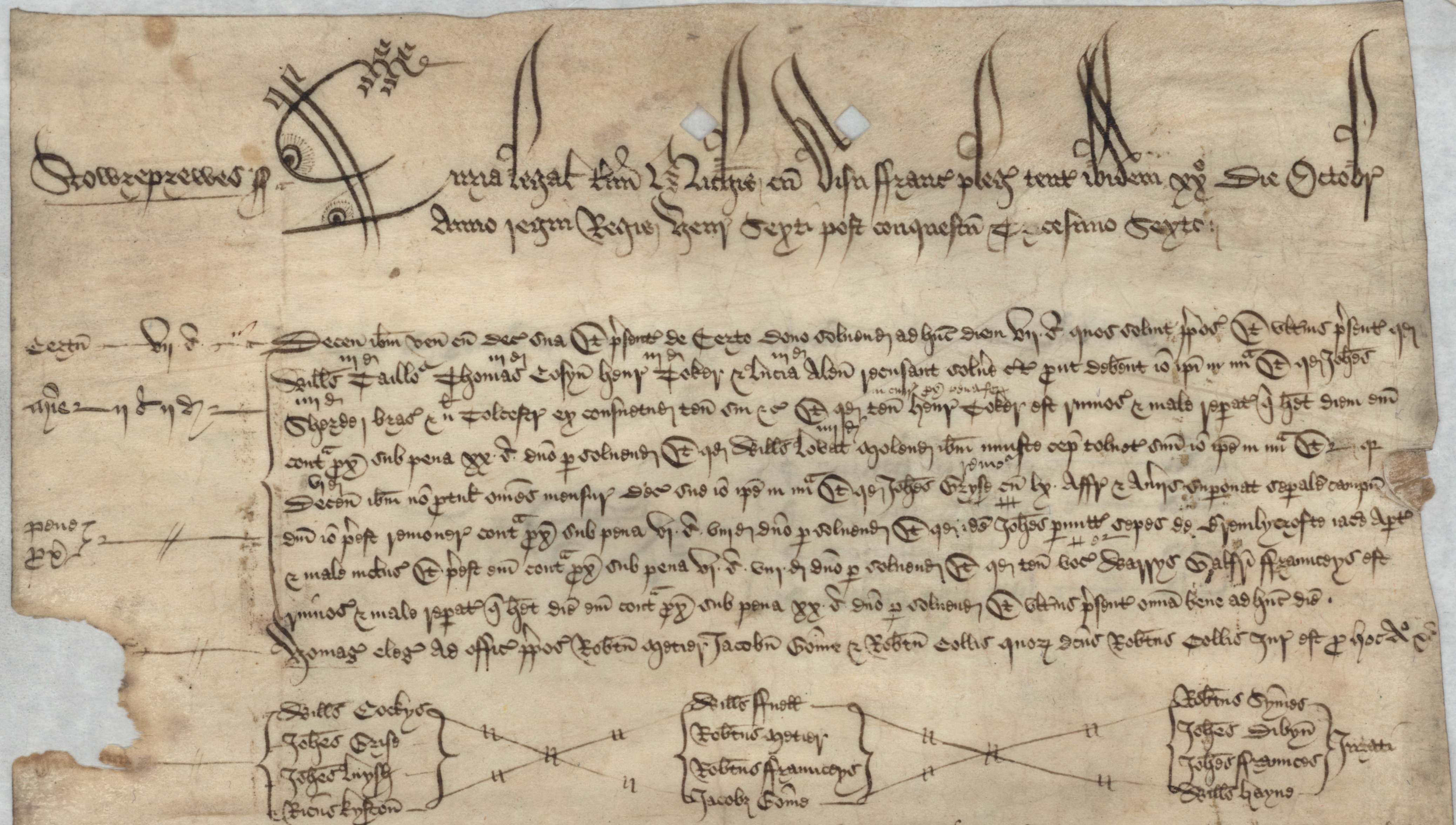 A Survey of Suffolk Manors

This record of copyholds, tenants and fines includes the Suffolk manors of Kersey Priory, Overhall in Barkin, Borehouse in Edwardston, Great Bricett. Such surveys offer insights into family names and relationships, use and exchange of property, land prices, and agricultural practices. 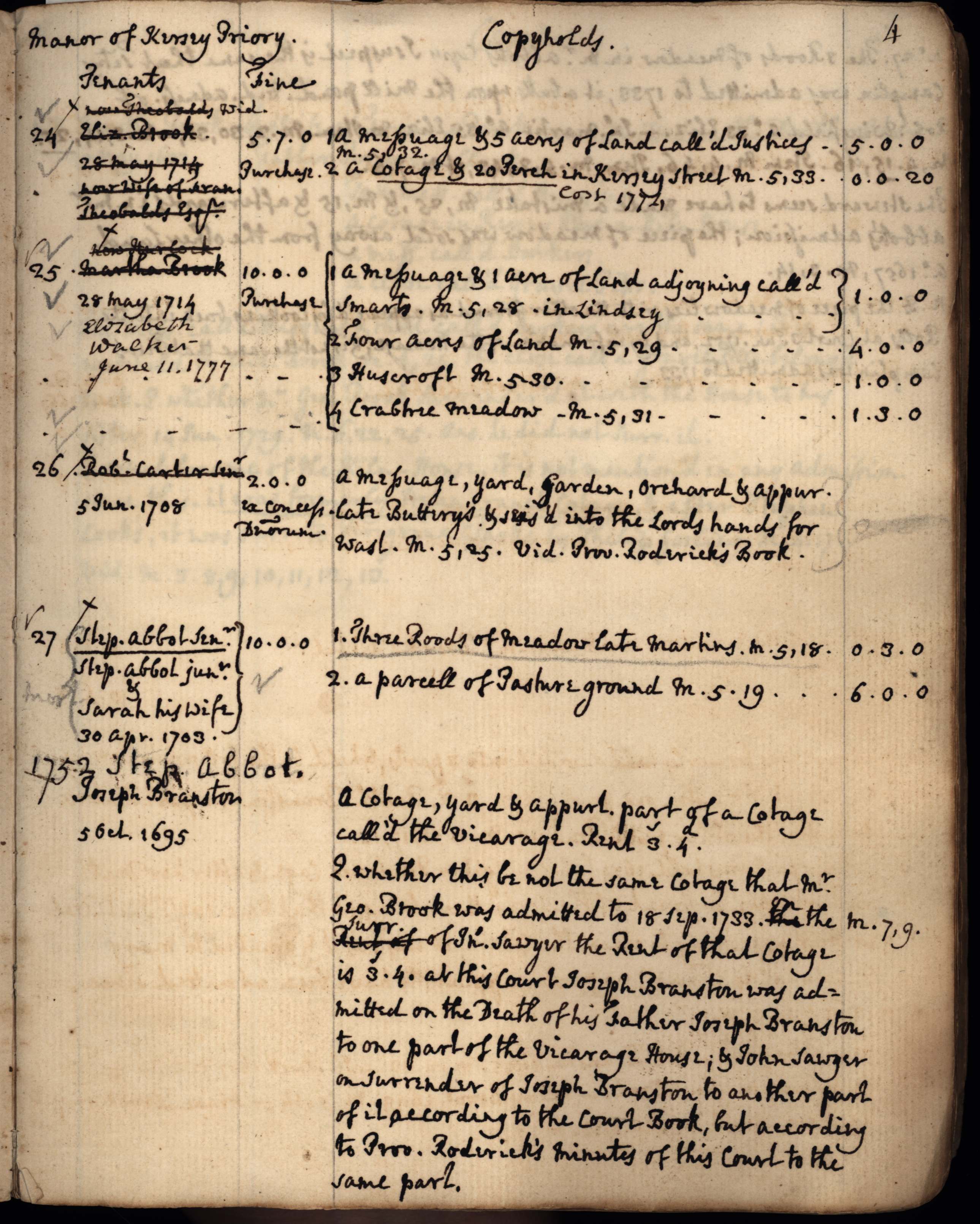 Not all archives are ancient. This lease of College property to philosopher Alfred North Whitehead is dated 1899. 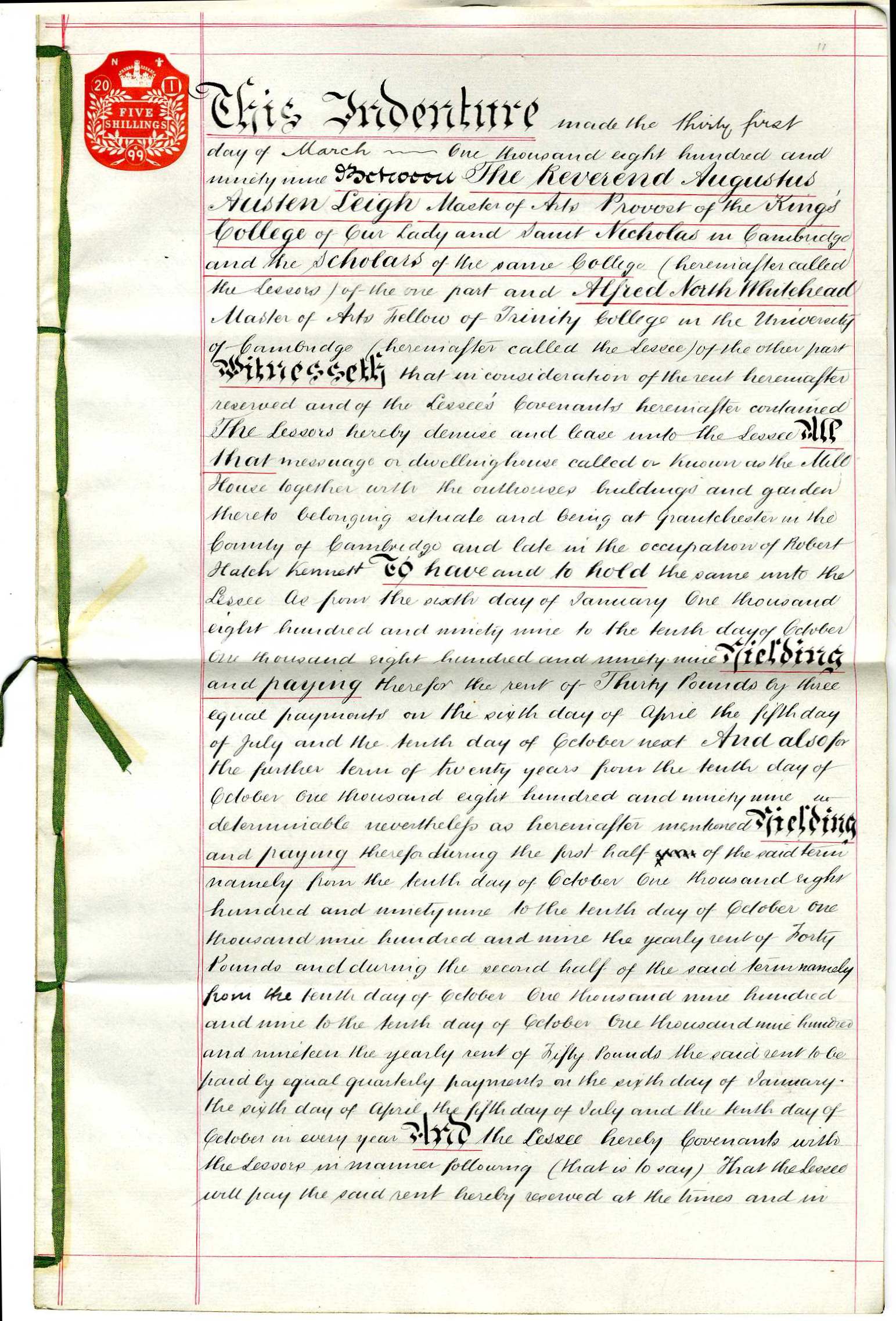