Masons' marks are a form of signature etched into the stone and, tucked away in hidden corners, they remind us of the men who lived and died during the construction of the Chapel. Comparisons can be made with marks in other chapels and churches to track the craftsmen as they moved around the country.

John Saltmarsh, King's Fellow and historian, shows how much information about the construction of the Chapel can be extracted from the series of College accounts, the 'Mundum Books', which form a continuous sequence from 1447 to 1991. The written record of income and expenditure is brought to life by careful calculation of labour costs alongside the listing of men's names and their skills. We are able to learn the peaks of activity and periods when building work was halted, to imagine the master-craftsmen calling orders to the masons or carvers, to envisage the deliveries of raw materials along the river Cam.

In 2015 the College published Saltmarsh's in-depth analysis of the chapel building works as 'King's College Chapel: A History and Commentary', a book he had nearly completed just before he died. Copies can be bought via The Shop at King's, for which see the link below. 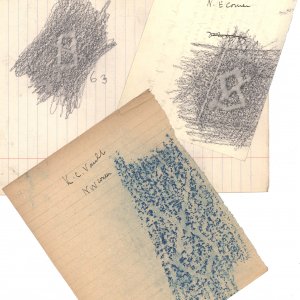 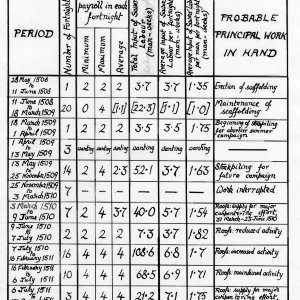 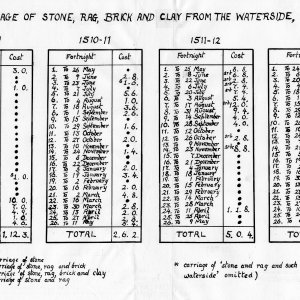 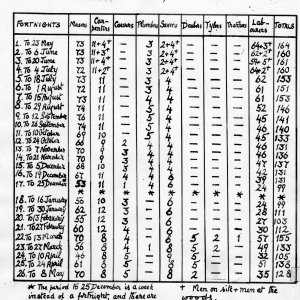 L.P. Wilkinson, King's Fellow and Classicist, summarizes the removal of the stained glass, and captures the sense of a Chapel deprived of one of its most glorious features, in his A Century of King's: 1873-1972 (King's College, 1980): 'On 1 September 1939, when the Germans invaded Poland, a telegram had gone out to the holidaying members of the Council asking their consent to the removal to safety of the East Window of the Chapel. Seven others were also removed during that Michaelmas term. Then there was a pause until the war heated up in the summer of 1940. By the end of 1941 all the ancient windows had been removed. Their rectangular sections were stored in the cellars of Gibbs' and in other cellars in Cambridge and elsewhere. They were replaced by sheets of grey tar-paper, with occasional horizontal strips of plain glass at the bottom to let in light. The West Window of 1879 remained, appreciated at last in the absence of unfair competition. But the Chapel was colder than ever in the winter, and the tar-paper rattled thunderously in the wind.' The side-chapel windows remained.

The file containing the plan shows that cleaning and restoration work was undertaken during the war and post-war years, so the necessity of saving the glass from destruction also became an opportunity to mend and enhance it. Partly due to financial restraints imposed on the College in applying for Government funds for war restoration work, it was not until 1948 that the glass was replaced.

Shown below are designs for heraldic glass by 'J.H.', possibly J. Hedgeland, 'for the Hall of the College'. 21 December 1829. 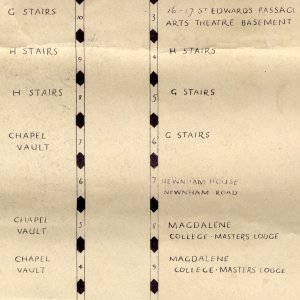 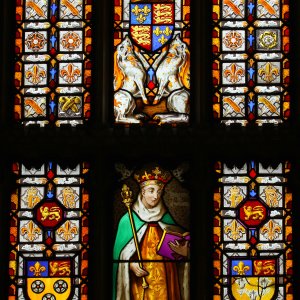 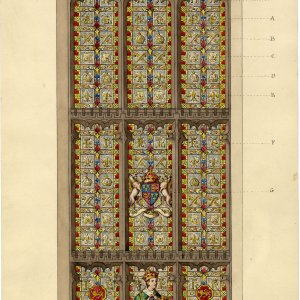 Design for a window in the Dining Hall showing Henry VI. (reference: KCD/384) 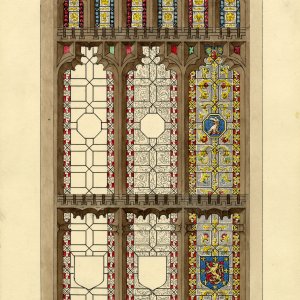 Design for heraldic glass for a window in the Dining Hall. (reference: KCD/386)

John Saltmarsh places the first document shown below in its historical context: 'The project of completing the Founder's design was … taken up with energy by Provost John Adams, soon after his election in 1712. Nicholas Hawksmoor, with the advice of his master Sir Christopher Wren, prepared a scheme which included, not only the Founder's great court to the south of the Chapel, but also his cloister and bell-tower between the Chapel and the river; although the buildings were to be in the Palladian and not the Gothic manner. The Toft Monks timber was cut and sold; on 8 May 1714 the Provost and Fellows confirmed the appropriation of the proceeds to the continuation of the Founder's design; and by the end of the year a building fund had been established. Yet the project was again postponed; and when it was put in hand, at last, in 1724, four years after Adams's death, it was to a new design by James Gibbs, from which the cloister and bell-tower were omitted. The foundation stone of the west range of Gibbs's intended court was laid on 25 March 1724; the building seems to have begun to be occupied in the summer of 1732. Although the College building fund was substantial, and was augmented by subscriptions, it was exceeded by the cost of this one range; no more was built, and the debt was not fully paid off until 1768.' (King's College: A Short History, Cambridge, 1963, pp.44-45). The College bells, which had become derelict, had to be sold - their inscriptions are shown below.

The bill shown below is for work undertaken on the new building, now known as the Gibbs building. Signed by the architect, James Gibbs and the surveyor and architect James Essex. From a bundle of estimates and accounts of masons, plasterers, & carpenters working on the Gibbs Building. December 1729. 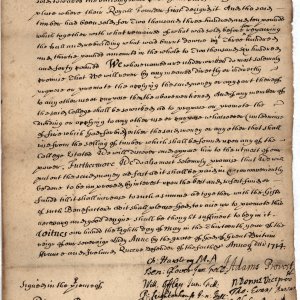 Agreement signed by Provost Adams and other Fellows to sell the timber in Toft Monks Woods and use it to finance 'the building some part of the said College in or about the place where their Royall Founder first designed it'. (reference: Coll. 1/59a) 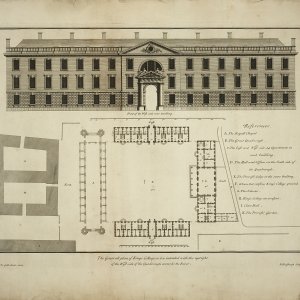 'The Generall Plan of King's College as it is intended with the upright of the West side of the quadrangle towards the river'. Engraved by H Hulsbergh (ref: KCD/284) 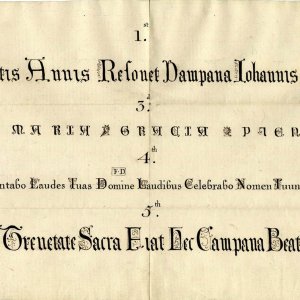 Inscriptions on the bells which were sold for scrap to help pay for the Gibbs building. (ref: KCC/12) 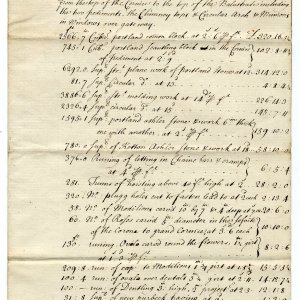 Work on a new building based on designs submitted by William Wilkins (1778-1839) began in the spring of 1824. His first recommendation to reduce the length of the front of the Gibbs building, removing the sitting rooms on its north-eastern and south-eastern corners, had been over-ruled by John Nash and Jeffry Wyatt, the consultant architects advising the College. Authorisation was given on 14 November 1823 for the site to be cleared and the trees, walls, gateway and other buildings to be sold by auction.

The Hall was ready for use by the beginning of 1828 and the 'Wilkins range', complementing both the Chapel and the Gibbs Building, formed the third side of a court originally envisaged by King Henry VI in 1441. (Information from Allan Doig, The Architectural Drawings Collection of King's College, Cambridge, Avebury Publishing Company, 1979).

Wilkins' prize-winning competition designs are part of a set of 64 working drawings held in the College Archives (KCD/449-511). He proposed a 'Gothicisation' of the Gibbs Building, which was drawn by a Fellow as shown below. 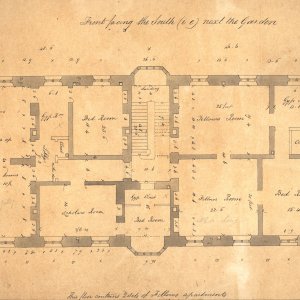 First floor plan: Fellows and Scholars apartments at the east end of the Hall (A staircase). (ref: KCD/478) 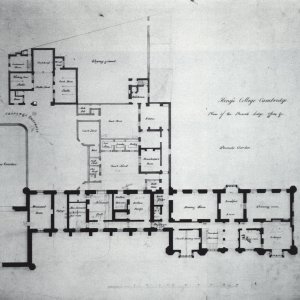 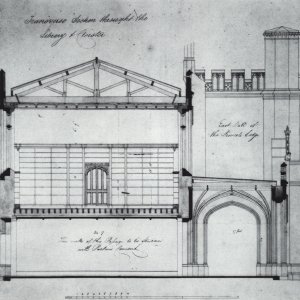 'Transverse section through the Library and Cloister' by William Wilkins. 1823 (reference: KCD/465 as reproduced in Doig) 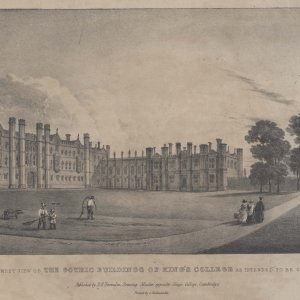 Engraving by T.M. Baynes and the Revd. J. Tomkyns, Fellow of King's College showing a north west view (from the river Cam) of the proposed Wilkins Building and gothicised Gibbs' Building. (ref: CMR/199)

Four of six proposed designes for a monument to the Founder, King Henry VI, in the Front Court. In all of them he is either standing and canopied as a fountain, or reclining on a tomb. The last two proposed monuments were intended to stand 40 and 50 feet high respectively. The version finally chosen was designed by H. H. Armstead, R.A., and was set up in 1879. Amstead's statue of King Henry is raised on a fountain adorned by figures representing Religion (facing the Library) and Learning (facing the Chapel). 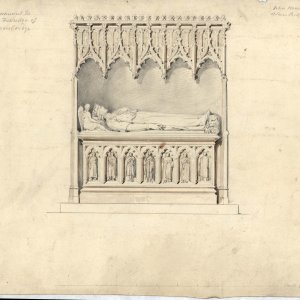 Design for a monument to Henry VI (reference: KCD/401) 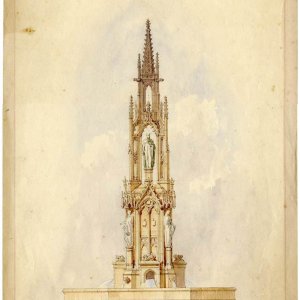 Design for a monument to Henry VI (reference: KCD/405) 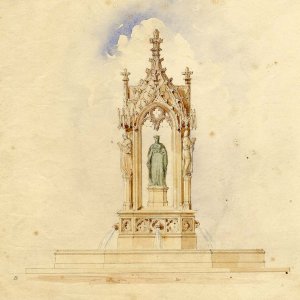 Design for a monument to Henry VI (reference: KCD/406) 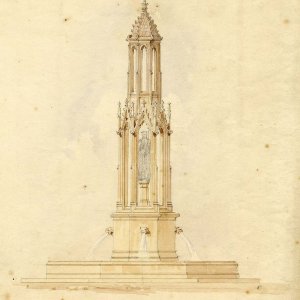 Design for a monument to Henry VI (reference: KCD/406)

The plan of the King's College brewhouse by Richard Woods c.1730 is unique, for it provides the most detailed representation of a college brewhouse interior available to date in Cambridge. Using pictorial evidence available from the plan, in association with equipment inventories contained within the College Archives, one can gain an exceptional insight into brewing activities of the College. For example, not only can one identify specific types of brewing equipment in use during this period, such as the boiling copper, mash vats and coolers, but a sense of layout and scale of the brewhouse building and brewing equipment can also be achieved. The brewhouse was set on two levels, with a width of 21 ft, length of 28 ft, and a boiling copper measuring 10ft high and 4ft 6 ins in diameter, this represents a sizeable operation easily capable of supplying the College with all its brewing necessities. 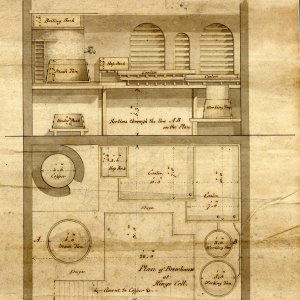 Records of the manors passed to the College, and the records of 164 estates in 30 counties are held in the College Archives.
Read more

Worship and religion have heavily influenced College life and architecture ever since its foundation in 1441.
Read more
Shop at Kings