Living and dying in Cambridge after Rome 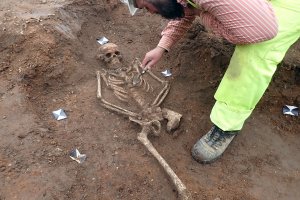 Dr Caroline Goodson (King’s) hosts Dr Sam Lucy (Newnham), who is a world-recognised expert in Anglo-Saxon archaeology and cemeteries in particular, to learn more about what we know about Cambridge after the Roman period and why cemetery archaeology in particular is such a critical source of new evidence.

The discovery last summer at Barton Road in Newnham of a burial ground dating from the early Anglo-Saxon period (5th to 7th centuries) is prompting new research into old questions about life and death in a key period of the history of Britain. The presence of an early medieval burial ground had been hinted at by finds in the area since the late nineteenth century, but it was only when existing buildings at Croft Gardens were demolished last year to make way for new King's student accommodation that it became possible to investigate through an archaeological dig -  and more than 60 graves found, along with grave goods including bronze brooches, bead necklaces, glass flasks, weapons, and pottery.  Analysis is underway on the excavated graves, but there is already exciting new information emerging about how people lived and buried their dead in this part of West Cambridge from other discoveries in and around the former Roman town and along the riverbanks.