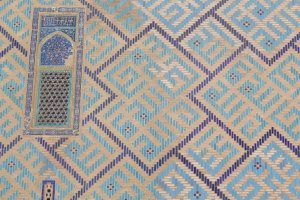 The College has embarked on a new programme of research devoted to the histories and cultures of the countries of the Silk Roads. This event, with Silk Roads Programme Associate Directors Professor Peter Frankopan and Professor Robin Osborne, introduces the programme and its aims and gives the opportunity to hear the first three Research Fellows elected to the programme talk about their own research.

The Silk Roads is the name given to the networks of exchange linking the Pacific coast of China, Russia and South East Asia with Central Asia, the Middle East and beyond. The term has become a popular shorthand for long-distance contacts and the exchange of luxury goods, often conjuring a distant, exotic past. This talk sets out how the idea of the Silk Roads can be helpful as a way of looking at the past and the present locally, regionally and globally – and how the programme at King’s will develop our understanding of each and all.

Cities were vital in Medieval trade networks, especially in Central Asia where they occupied small areas of oasis land, essential stopping points for crossing the region’s deserts. In the 11th-14th centuries these cities, to the east of the Caspian Sea, witnessed huge prosperity, but a series of steppe nomads, most famously Genghis Khan had other ideas, unleashing destruction, and causing economic chaos. This talk briefly illustrates archaeological evidence for urban change in the wake of the Mongol Conquest and introduces techniques Katie will use while at King’s, to consider longer-term shifts within urban nodes on these important Medieval trade routes.

The Islamic world has often been perceived as mercantile, both in popular culture, as people recall visits to the souqs of Marrakesh or Cairo, and in scholarly literature, which has even gone as far as seeing the seeds of modern capitalism in the Islamic culture of the middle ages. Edward Zychowicz-Coghill’s research investigates how far this perception holds true, using literary, biographical, legal, and ethical texts to inspect the ways early Islamic writers discussed the acquisition, consumption, and circulation of wealth.

The Mongol Nomads in the Persianate Discourse 1300-1600
Reza Huseini

The Ilkhanids, the Timurids and the early Mughals were each two centuries apart but were  key moments of the Turco-Mongolian world-conquest. Reza Huseini’s research focuses on the search of all three conquering dynasties for a new ‘imperial ideology’ broad enough to encompass a wide variety of ethnic, social, cultural, and religious groups, and the transition they faced from semi-nomadic warriors to ruling a primarily sedentary empire. Their quest to become ‘universal rulers’ involved writing new world histories - with huge consequences for the identity of the rulers themselves as well as their past, going back to the early nomadic Mongol Empire under Chinggis Khan and his immediate successor. Post-nomadic history writing reinvented the tradition of the early Mongols, and this talk looks at each of the three cases separately - highlighting different spatial and temporal co-ordinates -- as well as the way they build on each other.

You can read more about the  Silk Roads Programme here.