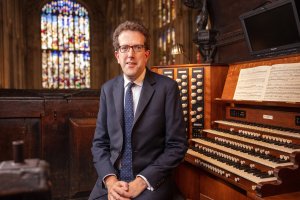 Watch an organ recital in King’s College Chapel, performed by the Director of Music Daniel Hyde.

The performance includes music by Bach, Schumann, and Vierne.

Daniel Hyde is a versatile musician: a world-class conductor and organist, a natural leader and a broad-minded academic. Daniel has held the prestigious post of Director of Music at King’s College, Cambridge since October 2019. As part of this role Daniel is responsible for one of the world’s most renowned choirs; working with the choristers and scholars of the Choir of King’s College, Cambridge is a nurturing and inspirational role, well-suited to Daniel as a world-class choral trainer.

As a choral and orchestral conductor, Daniel has worked with many of the world’s leading ensembles including the BBC Singers, the London Bach Choir, Britten Sinfonia, the Orchestra of the Age of Enlightenment, the Academy of St Martin in the Fields, the Orchestra of St Luke’s and New York Baroque Incorporated.