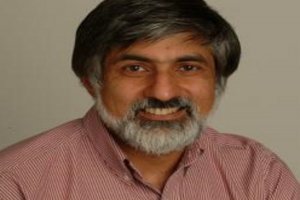 The fourth Alan Turing Lecture was given by Professor Philip Maini from the Wolfson Centre for Mathematical Biology, University of Oxford, on 29th April 2021.

Towards the end of his life, Alan Turing turned his immense talents to mathematical biology and, in 1952, published a seminal paper on pattern formation. This talk will begin with a review of his work, showing how his mathematical model has been applied to such diverse areas as limb development, animal coat markings and sea shell patterns. It will also be shown that his theory correctly predicts aspects of Premier League Football Shirt patterns. Professor Maini will then review recent work on another phenomenon in developmental biology -- neural crest cell invasion - showing how a very simple mathematical model has led to new biological insights.

The webinar was hosted by the Provost, Professor Michael Proctor (Chair of the Alan Turing Committee) and was joined by King’s Fellow, Dr Ronojoy Adhikari, for Q&A following the lecture.

You can view the lecture slides in more detail here.

“Professor Philip Maini FRS is a distinguished mathematical biologist, and is the head of the Centre for Mathematical Biology at the Mathematical Institute in Oxford. In his research, through sophisticated mathematical modelling, he has elucidated many of the mechanisms behind pattern selection and morphogenesis in biology and medicine, a subject of great interest to Turing, who was one of the first to understand the biochemical basis of pattern formation in biology.”   Professor Michael Proctor, Provost

The annual Alan Turing Event is kindly sponsored by the Stanley Foundation.

If you would like to support the Alan Turing Initiative at King’s College, Cambridge, please visit: www.kings.cam.ac.uk/members-and-friends/support/giving/empowering-minds/the-turing-initiative

The Alan Turing at King’s Archive Exhibition is available here.