Bringing the Polish Cyclometer back to life 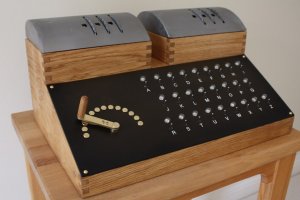 It is a little-known fact that the Enigma was initially broken by a team of three Polish cryptographers: Marian Rejewski, Henryk Zygalski and Jerzy Różycki. Whilst Alan Turing and his colleagues at Bletchley Park are credited with the regular breaking of German communications, their work was made possible only by the breakthroughs of the Polish cryptographers. Their achievements include deducing the wiring of the Enigma, and then developing ways to deduce the daily settings of the Enigma (of which there were ~7.2 billion billion).

The Cyclometer was a device that Rejewski invented to facilitate the recovery of the Enigma settings. In the lead-up to the Second World War, those settings were changed on a daily basis, and without knowing them, it was impossible to listen in to the German communications. However, when it became clear that Poland would be invaded, all evidence of the Polish breaking of the Enigma had to be destroyed, including the Cyclometer.

Purely from Rejewski's drawings, and papers, which he handed over to Turing and his Bletchley Park colleagues after fleeing Poland, we have reconstructed the Cyclometer. This is a world first, and in this talk we will explain what the Cyclometer did, how it was used and how we went about bringing it back to life. We will also give a demonstration of the Cyclometer in action.

The Cyclometer project was kindly funded by Philip Fernandez, KC1988

Tim Flack is a University Lecturer in the Engineering Department at Cambridge, where his main research themes concern renewable electricity and electric drive systems. He is also a Fellow of King's College where he is currently the Senior Tutor. Although vaguely aware of the work of Alan Turing, who studied at King's College, his interest in all things related to the Enigma was stimulated by a visit to Bletchley Park. There, he realised that the work of the Polish cryptographers was key to the success of Turing's work, and that was what inspired his work on the Polish Cyclometer.

Hal Evans is an alumnus of the University of Cambridge, graduating in 2019 with a double first in Engineering. He specialised in Mechanical Engineering during which he was responsible for the initial research into, and the design and manufacture of, the Polish Cyclometer replica for his Master’s year’s research project. Upon graduating, he worked full-time to ensure the completion of the world’s first faithful Cyclometer replica, heading its design and manufacture. He has a broad range of interests varying from Engineering and Mathematics, to Architecture, History and Art. He is now working as a business management consultant in London.

The Alan Turing at King’s Archive Exhibition is available here.