In this exhibition we will look at the relationships between certain well known Kingsmen and their mothers. Particular attention will be paid to things like terms of address used in letters home, the topics they discussed and what they thought of each other.

Mary Ruth Brooke was the daughter of Charles Cotterill, who preached in Stoke-on-Trent. Her brother was Charles Clement Cotterill, master of Glencorse house, at Fettes School. It was there that she became a matron and met William Parker Brooke, whom she married and with whom she moved to Rugby.

In his letters home, Rupert always called Mary Ruth Brooke ‘mother’ but among friends he called her ‘Ranee’. At King’s, Rupert joined a secret society called the Apostles. Around the time of Rupert Brooke’s election, Lytton Strachey started calling Rupert ‘Sarawak’. There had been some talk of him being related to the Rajah of Sarawak. Although that rumour was not confirmed, upon hearing this nickname, Rupert decided that he should refer to his mother as ‘Ranee’.

Mary Ruth Brooke was supportive of Rupert’s poetry. She had one of his early poems, ‘The Pyramids’, printed and in January 1912 Rupert described her ‘pushing my book in the English portions of Cannes’ (letter to 'Ka' Cox).

One might consider her to have been rather conservative and a dominant presence in Rupert Brooke’s life. He rebelled against this, if somewhat mildly, through small gestures like pretending he only had one tie, knowing that she disapproved of it. She appears to have got on with ‘Ka’ Cox, with whom Rupert had perhaps his closest relationship, but he didn’t discuss his now famous love life with his mother. He had a good sense of what he could share with her and what he ought not to discuss, for example, he didn’t want her to know that Hilaire Belloc had been drunk when Rupert met him (see letters to Francis MacCunn and Mary Ruth Brooke, written in 1907).

A breakdown which Rupert suffered in 1912, at which time he was in a somewhat troubled relationship with ‘Ka’ Cox, led to some tension in Rupert’s other relationships, not least with his mother.

As he grew up, Rupert started to find it difficult to spend long periods of time with his mother (‘a month with the Ranee nearly finished me’, letter to John Maynard Keynes, dated 10 April 1912); however, he still wrote to his friend Edward Marsh that he had a ‘warmth for the Ranee’ (letter dated 24 May [1914]).

Rupert tended to write rather long letters, especially to ‘Ka’ Cox, so in some cases, only the relevant sections are shown below. 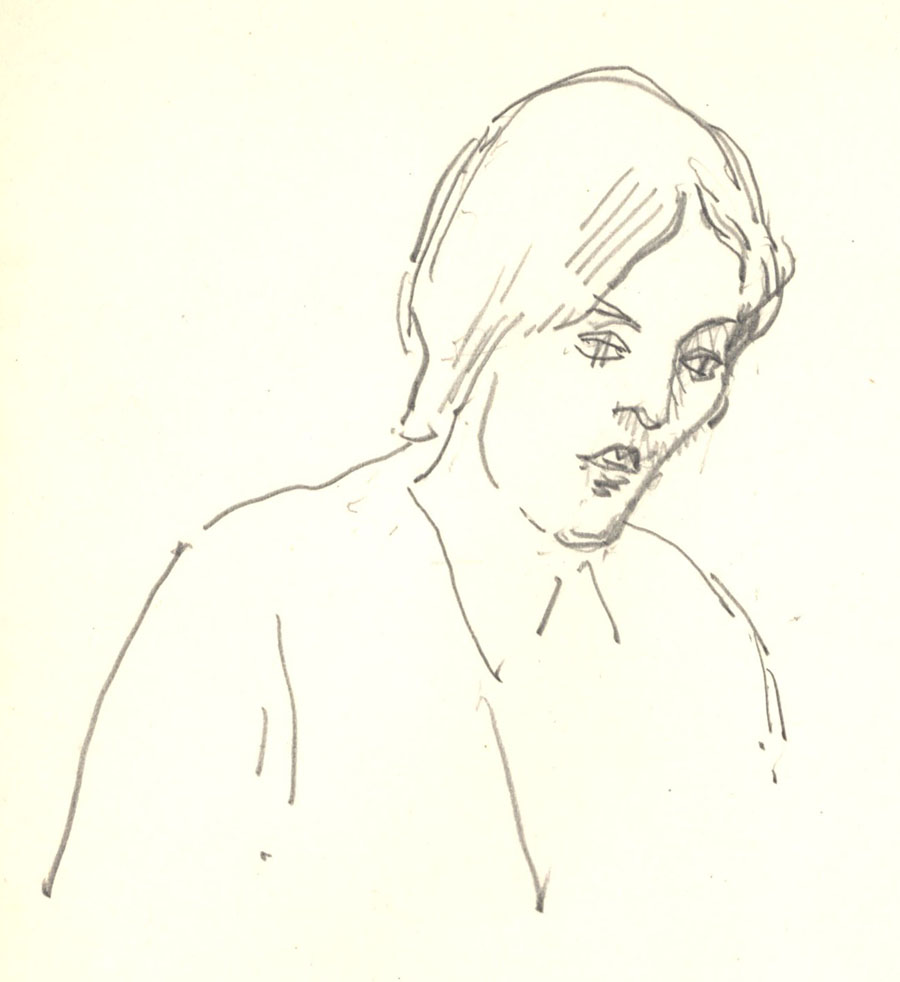 Vanessa Bell was one of the people at the heart of the Bloomsbury group, alongside her sister Virginia Woolf. Julian Heward Bell was born to Vanessa Bell, the artist, and Clive Bell, the art critic, in 1908. Vanessa Bell famously had an affair with Duncan Grant and they had a daughter, called Angelica Garnett.

The Bloomsbury group is characterised as being progressive and valuing openness very highly. Arguably, this is best seen in the relationship between Vanessa Bell and her son Julian. In Julian Bell: From Bloomsbury to the Spanish Civil War, Peter Stansky and William Abrahams wrote:

Julian was born on February 4, 1908. The most important person in Julian’s life, from its very beginning to its very end, was his mother, the gifted and beautiful Vanessa Bell. Theirs was a relationship without a break and without concealment: in it the full implications of Bloomsbury candor were taken to their limits, and the connection between mother and son never weakened.

When Julian Bell came up to King’s College in 1927, his letters home included rather unsurprising details about how he was settling into his new life, as well as requests for items like pictures and a bicycle. In that sense, there are similarities with Rupert Brooke’s first letters home upon matriculating. Where the differences lie is in the tone, with Julian’s letters home almost seeming like letters to a friend. For example, he calls his mother ‘Nessa’.

Later in life, while pursuing a career as an academic at Wuhan University in China, Julian’s letters to his mother give quite a detailed account of his relationship with a married lady (see the third page of letter dated 17 December 1935). In the 1930s, few people would have shared such details with their parents. The following letter contains details of that affair.

Edward Morgan Forster (hereafter Morgan) was born on 1 January 1879, the only child of Alice Clara "Lily" (née Whichelo) and Edward Morgan Llewellyn Forster, an architect. Morgan’s father died while he was still an infant, on 30 October 1880. Inevitably, this led to him having a very close relationship with his mother.

In fact, he spent much of his life living with her. For this reason, he seldom wrote to her and the best place to find details about their relationship is his locked diary, in which he kept his most private memories. His comments suggest that his mother never really understood or appreciated his talents as a writer, that she was rather conservative and that she said things which were detrimental to his self-confidence, whether intentionally or not.

Though Morgan is considered to have been a member of the Bloomsbury group, he didn’t benefit from the openness which characterised the upbringing of second generation Bloomsbury members, such as Julian Bell.

Whereas Rupert Brooke was able to lead the lifestyle he chose for himself, without sharing everything with his mother, Morgan’s mother was a constant presence in his life until her death in 1945. Brooke had found small ways of rebelling against his mother, while Morgan had occasional fits of rage, for which he felt very sorry. Morgan clearly loved travelling and experiencing other cultures. Perhaps part of the pleasure was due to freedom from the pressures of his life at home.

As he grew up, Morgan began to realise that though his mother lacked the intelligence of many of his friends, her experience of life had made her far shrewder.

John Maynard Keynes (hereafter Maynard) was born in Cambridge on 5 June 1883, the son of Florence and Dr. John Neville Keynes, Fellow of Pembroke College and later University Registrary. Although it was his father who was the academic, his mother was a very influential lady. She was an early member of Newnham College, who went on to become a social reformer and magistrate. In 1932, she became Mayor of Cambridge. She thrived in intellectual and powerful circles which, at that time, may not have welcomed women.

Florence Ada Keynes’ reflections on Maynard’s childhood suggest that he was precocious but polite. They tell of how he passed his time, from reading to collecting stamps. They show that she and his father would chastise him if he misbehaved but that this was not often necessary. Vanessa Bell had seldom chastised her son Julian, although friends such as Roger Fry sometimes felt it would have been appropriate. This may reflect the fact they were from different generations.

Maynard was educated at Eton, and came up to King's College, Cambridge as a scholar in 1902. He went on to become a Fellow and Bursar of the College, as well as one of the most influential economists of his generation. Like E.M. Forster, he was also an early member of the Bloomsbury group. He did not discuss his personal life as openly as Julian Bell had discussed his with Vanessa Bell, but Maynard did seem to have an easier relationship with his mother than Rupert Brooke and E.M. Forster had with theirs.

Maynard was a member of the Apostles, a prestigious secret society in Cambridge. In 1903, having been given leave to do so, he confided his election as an Apostle to his mother. This may suggest that he knew she would understand the significance and that she could be trusted to be discreet.

As we saw on a previous page of this exhibition, E.M. Forster considered his mother shrewd, though not intelligent. In contrast, Maynard seems to have appreciated his mother as an intellectual. Intellectual discussion between this mother and son is quite apparent in their correspondence concerning Maynard’s work as a delegate of the British Treasury at the Paris Peace Conference, in 1919, and subsequently his book The Economic Consequences of the Peace. The extent of his frustration about the conference can be seen in the letter he sent his mother on 14 May 1919. It appears Florence Ada Keynes may have had an influence on Maynard’s book The Economic Consequences of the Peace, providing corrections and being asked to corroborate facts, particularly in relation to the inclusion of the Sir Eric Geddes’ simile of squeezing Germany like a lemon. Geddes’ comments were made in a speech at the Guildhall at Cambridge, on 10 November 1919. At that time, he was MP for Cambridge and Florence Ada Keynes was a magistrate and the city’s first female councillor.