In this exhibition we look at the changes in the use of certain parts of King's College's gardens and grounds. Particular attention is paid to the emergence of the College's iconic views and what Max Walters described as a shift from practical value to amenity.

King’s College has some of the most iconic and frequently photographed views of Cambridge, including the view across the backs to the Chapel and the Gibbs building and the view of the Chapel, Porter’s Lodge and Wilkins’ screen from King's Parade. It is even thought that Virginia Woolf described the King’s College ‘Backs’ in A Room of One’s Own, although she gave the College the pseudonym of ‘Oxbridge College’.

The grounds we associate with the College are not its earliest. Initially, the College had been much smaller, comprising the ‘Old Court’ and a much smaller chapel, to the north of the present Chapel. In September 1447, six years after the College was founded, Henry VI greatly enlarged his plans for the College, describing them in detail in his “Will and Intent”. To achieve this he bought numerous parcels of land to the south of the original Chapel. This area was densely populated, with busy streets, shops, a hospital and St John the Baptist church. This land was quickly cleared and Henry VI’s intended boundary wall was begun. It was some time before the landscape we are all so familiar with emerged though, as we can see from part of John Hamond’s birds-eye view of Cambridge, drawn in 1592.

The scheme the Founder proposed has been drawn onto a plan of the site as it was when he acquired it, by Willis and Clark. They also provided a plan of what was actually built. Both of these can be seen below.

The Founder's statutes included a gardener amongst the servants he required be supported by the College. It is likely that that post became largely 'the Provost's Gardener' over time and a gardener for the Fellows’ Garden was appointed in 1852. As the duties increased and the results became more visible, the College's Congregation decided on 8 June 1895 that a Fellows' Garden Committee should be established.

In a booklet entitled ‘King’s College Fellows’ Garden’, Max Walters suggested that certain changes in the treatment of the ‘Backs’ showed a shift from practical value to amenity.

A map drawn by Loggan in 1688 shows the College’s enlarged site as it appeared between the completion of the stonework of the Chapel (1515) and the building of the Gibbs building (begun in 1724). In this, he labels the expanse of largely clear space from the wall by the river to the foundations of the intended east range as the ‘Chappel yard’. Until at least 1515, the land had been used by the craftsmen who built the Chapel so the term 'Chappel yard' may indicate that the land had not yet become thought of as an amenity. In the map we see the bridge in its original position, with a path from it to the east of the site, roughly where the Porter’s Lodge is now. There is also a path leading from Friars-gate (the entrance on the south of the site, now Webb's Court gate) to the Chapel, which was lined with trees. Willis and Clark described this path as having grown into a ‘stately avenue’. The trees are probably those purchased in 1580, according to the accounts books. Loggan’s map also shows trees on the south and the east of the site.

The trees on the east can be seen in Loggan’s engraving of the south side of the Chapel. This engraving is also noteworthy as it shows animals grazing. These may have been the Provost’s horses, whose stables were on the south of the site.

Loggan’s map shows a bowling green and a walled garden. The latter may have been used as a Fellows’ garden.

Loggan’s map of the College site, 1688.
Mundum book entry, 1580.
Loggan’s engraving of the south front of the Chapel. 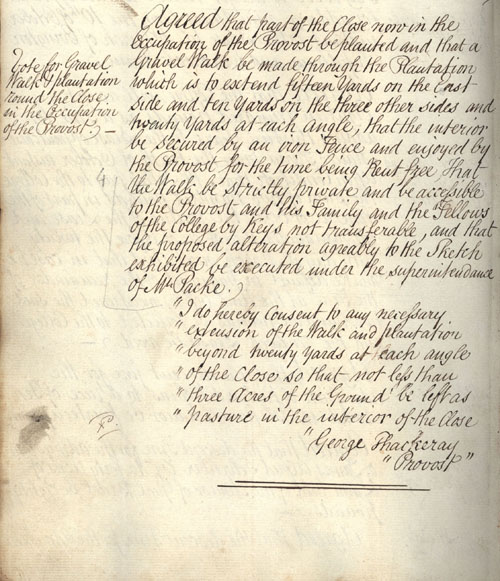 As Christopher Morris reports in his King’s College: A Short History, the building of Wilkins' new Provost’s Lodge between 1823 and 1828 necessitated the moving of the Provost’s stables from their old position south of what we now know as the Back Lawn to a site nearer the river, and in 1836 across the river to what is now the Fellows' Garden. Max Walters noted in his King's College Fellows' Garden the Congregation’s decision, in October 1836, to create a garden in the nearest field on the west side of Queen’s Road. King’s had been granted this field by the Enclosure Award of 1804.

Walters’ description of the emerging Fellow’s garden suggests a period of transition, with the space being used by both horses and Fellows for a short time. He quotes Saltmarsh.

The Fellows thus gained the privilege of walking around a shrubbery and contemplating the four horses which drew the Provost’s coach, as they grazed within the iron fence. But this did not satisfy them for long; and on March 20 1851, Provost Okes having ‘consented to commute the Close now assigned to him for some other as soon as one becomes vacant’, the original field was to be ‘laid out as a pleasure ground for the Fellows of the College'.

Gardens require certain expenditure, not least on planting and maintenance. In 1851, Mr Fuller was paid for the work he carried out in creating a ‘Fellows’ pleasure ground’.

It is difficult to know what the original planting scheme was but clues exist both in the garden itself and in the archives. Two invaluable records for that purpose are a ‘Handlist of Trees and Shrubs … grown in the gardens and grounds of King’s College, Cambridge’, created by Arthur Tilley (Fellow and Tutor) in 1904, and a copy of the 1888 ordnance survey map showing the Fellow’s Garden and the Backs, annotated by Arthur Hill (who went on to become Director of Kew and an Honorary Fellow of King’s) in 1907. The archives also contain receipts for garden expenses such as plants, although it is hard to identify where these were planted.

Despite being called the ‘Fellows’ Garden’, this space is popular with all members of the College, including undergraduates. Access was first given to students in 1935, with Garden Hostel being built in 1950.

In the previous section, I mentioned that the Provost’s Lodge was moved to the south of what is now called the Back Lawn, between 1823 and 1828. Prior to that, the Provost’s Lodge had been to the east of the Chapel, alongside several houses. Now one can see well-manicured grass and a large horse chestnut tree in that space, as well as a low wall dividing it from King’s Parade.

When Wilkins built a new Provost’s Lodge between his new Library and the river, (now it is the College Office), the buildings to the east of Wilkins’ new screen were no longer required. This allowed their clearance, affording the view which is enjoyed by many visitors to King’s Parade, arguably our second most iconic view.

Though not a particularly large lawn in comparison with the Front Court and the Back Lawn, this triangular plot increases the sense of openness of King’s Parade and allows a great view of the Chapel, screen and Porter’s Lodge.

In April 1932, a railing which had separated the lawn from the pavement of King's Parade was replaced with a low wall, built using Weldon stone like that used for parts of the Chapel and a Portland stone coping. The wall was erected using bequests from Dame Bertha Newall (in memory of her uncle Septimus Phillpotts, a King's Fellow) and Arthur Berry. The wall was built to echo similar changes at the front of the neighbouring Senate House. This demonstrates the College's recognition of its surroundings and the importance of their treatment of that space for the enjoyment of passers by.

We are open by appointment four days a week most of the year - please contact us by email or phone to book your visit.
Read more
Buildings, Grounds and Gardens section of the College Archive catalogue on ArchiveSearch