In this exhibition we will look at one of King’s College’s ‘livings’ and arguably its best known rector.

Until the twentieth century, the College’s main source of income was through rent. As well as owning land, the College often owned manorial rights. One such right was patronage, or advowson (though some advowsons are not tied to manors), which meant that the College, as lay Rector, could collect tithes and it also allowed the College to recommend a member of the Anglican clergy to be vicar at a vacant benefice, or ‘living’. The tithes, and often a house and glebe lands (lands associated with the benefice) were usually passed directly to the vicar. The making of such an appointment was referred to as a presentation.

For most of its history King’s College had about 27 advowsons and the list didn’t change much. The image below shows the list of advowsons in 1800. 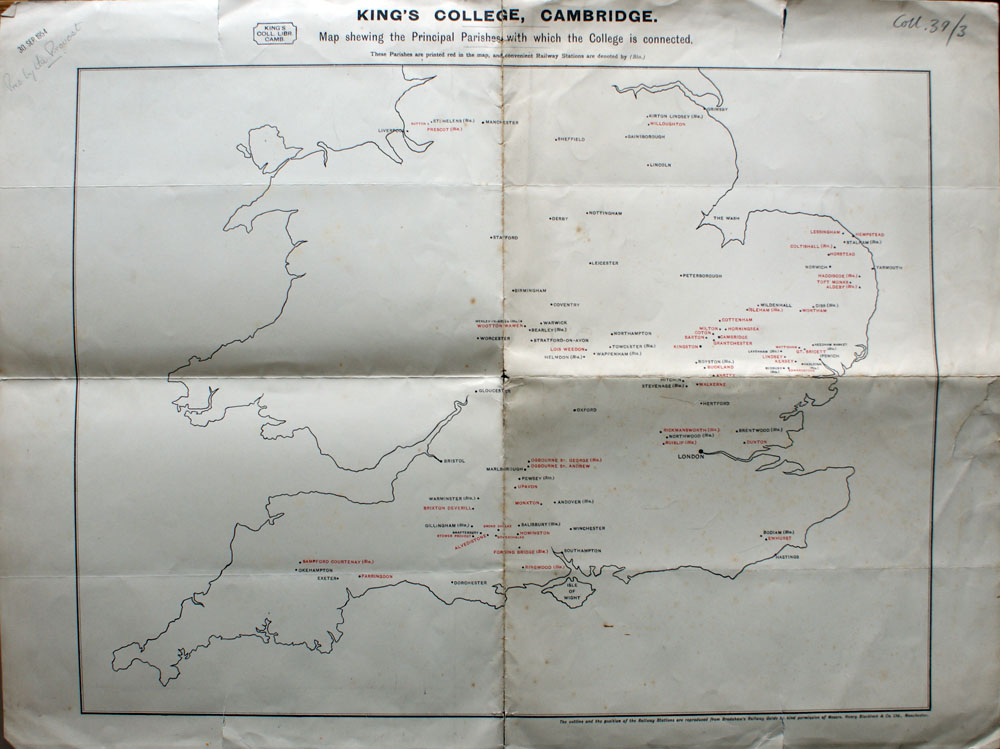 'Map shewing the principal parishes with which the College is connected' marked in red (Coll 39.3) 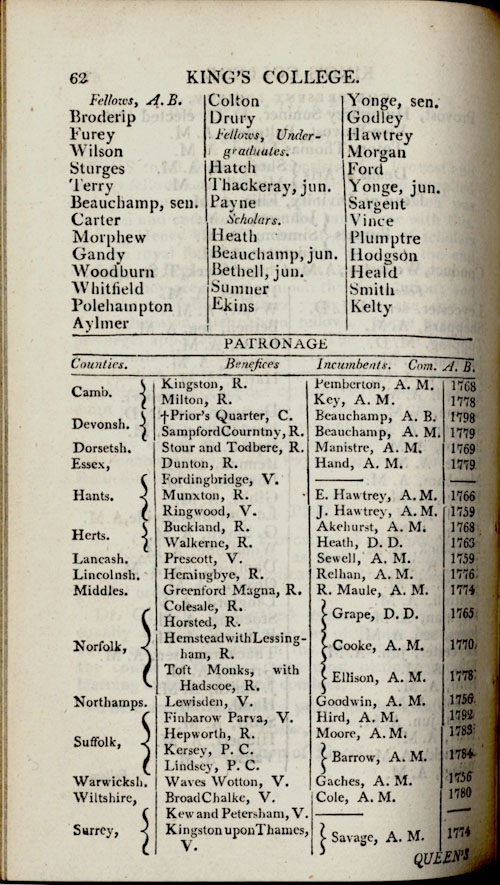 1800-01 Cambridge Calendar page showing the advowsons shortly after the time of Betham.

The advowson of Great Greenford rectory was purchased by the College in 1700 from Henry Castell. 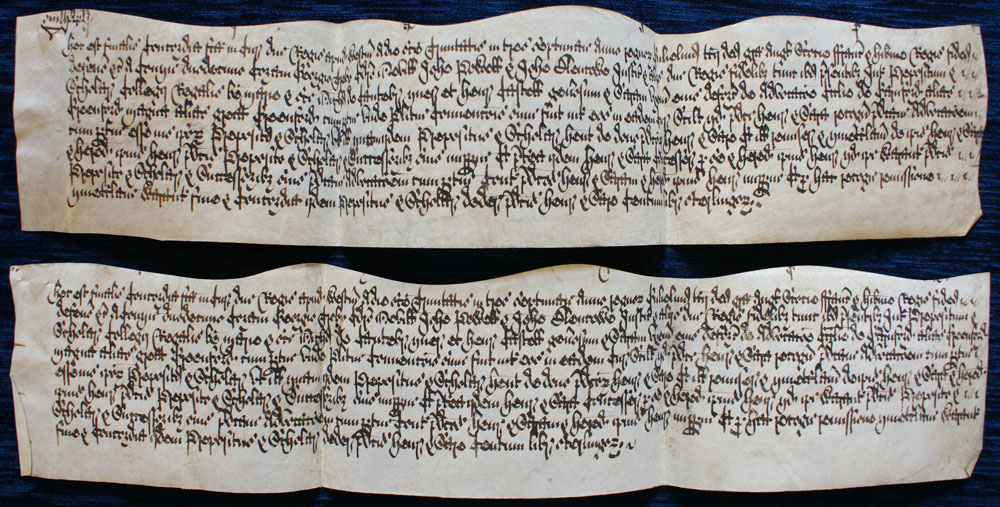 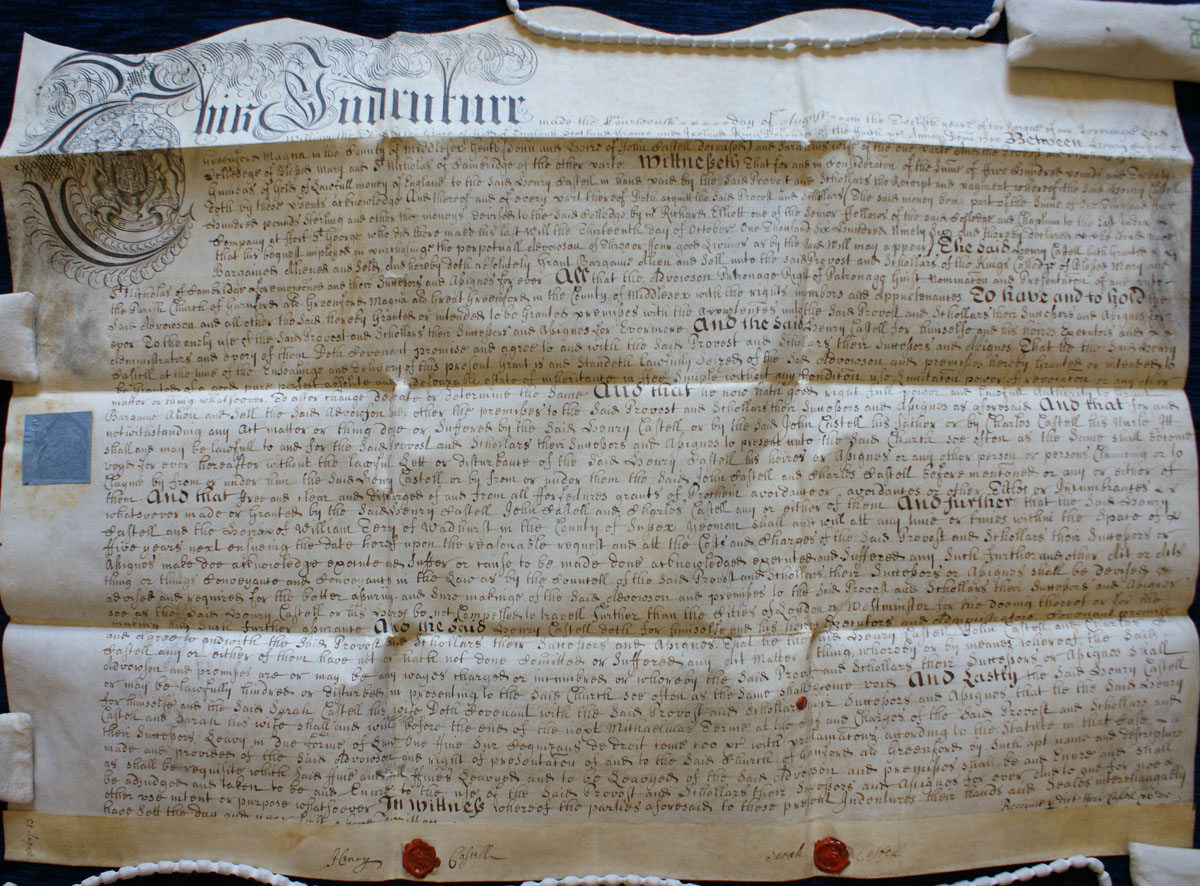 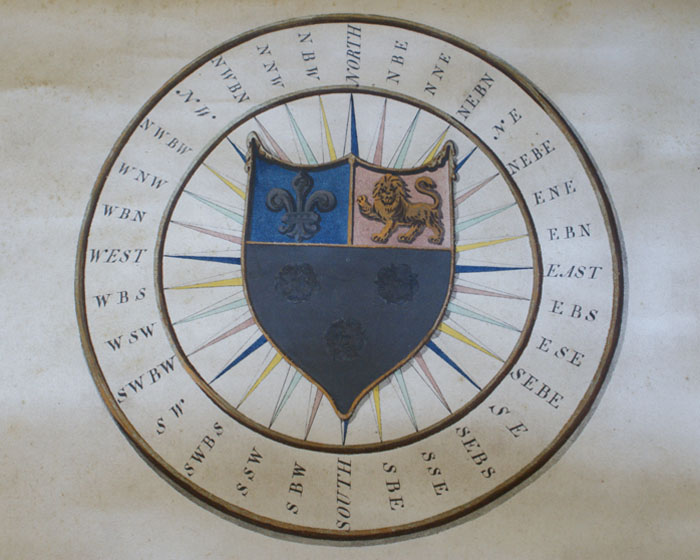 Edward Betham was born in Silchester, Hampshire, and baptized on 17 November 1709. His father, Robert Betham, rector of Silchester, was murdered in 1719, when Edward was just 10 years old.

He is credited with anonymous contributions to Henry Malden’s An Account of King’s College Chapel. Saltmarsh suggested that Betham may have been the first person by whom the chronology of the building had been worked out. He is believed to have identified features such as the change in the stone used to build the Chapel as a way of dating the work of the first period of its construction, although it was first noted in William Cole’s manuscript on the building, dated 1741. Cole had acknowledged Betham elsewhere but not in relation to this. In a footnote within his King’s College Chapel: A History and Commentary (p. 192), John Saltmarsh noted further observations by Betham, which indicate the extent to which the Chapel had been built by 1485 (the end of the second period of building works):

...the toothings in the brickwork in the north wall of the passage on the north side of the roof, and on the decayed state of the western face of the roof truss at the same point and the remains of moss formerly visible upon it. These indications seem to have been first observed and interpreted by Edward Betham, Bursar of the College in the mid-eighteenth century, who described them in his anonymous contribution to Henry Malden, An Account of King’s College-chapel, in Cambridge, Cambridge, 1769 p 21n; ... they are in fact approximately in a line with the west side of the fifth buttress from the east – that is, at the junction of the fifth bay from the east with the seventh from the west...

Betham balanced his considerable College duties with his vocation. In 1751 he became vicar of Teversham, Cambridgeshire. But even within College, he took care over religious observance on 24 May 1767, he wrote to Provost Sumner expressing his concern about undergraduates who were neglecting to attend Chapel.

In 1770, he was presented by King’s College to the living of Greenford Magna. 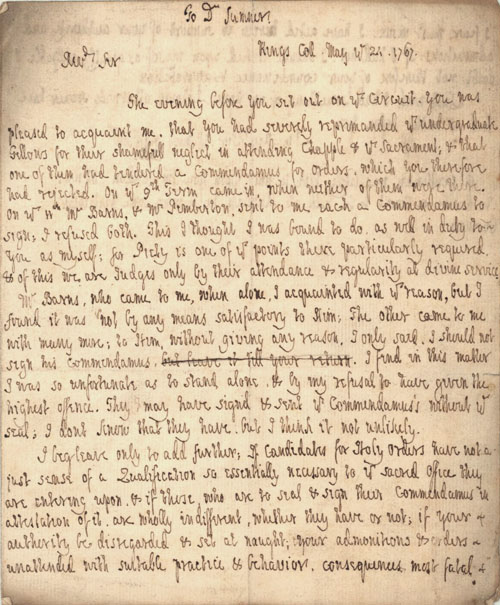 First page of a letter to Provost Sumner concerning attendance at Chapel, 24 May 1767 (KC/99). 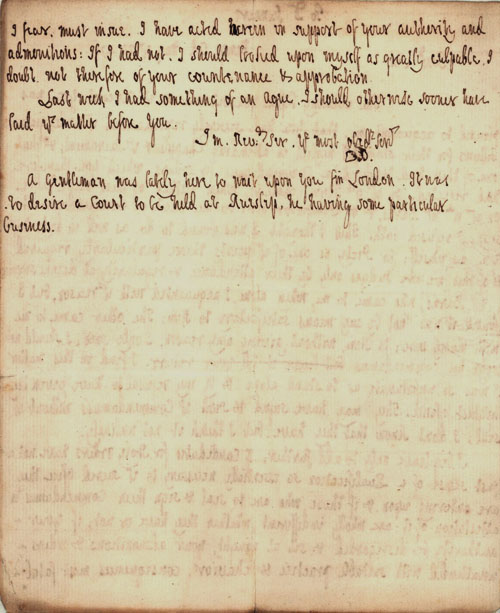 Second page of a letter to Provost Sumner concerning attendance at Chapel, 24 May 1767 (KC/99). 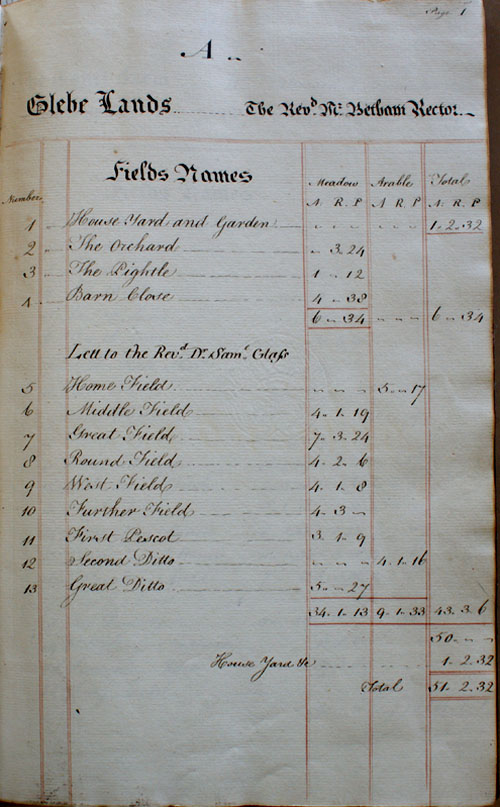 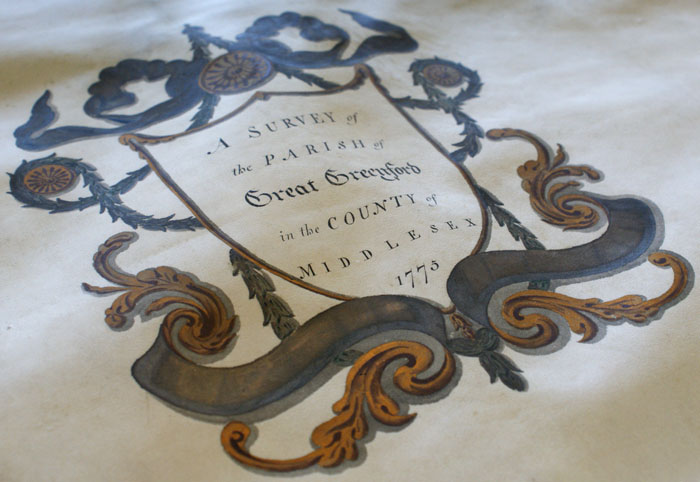 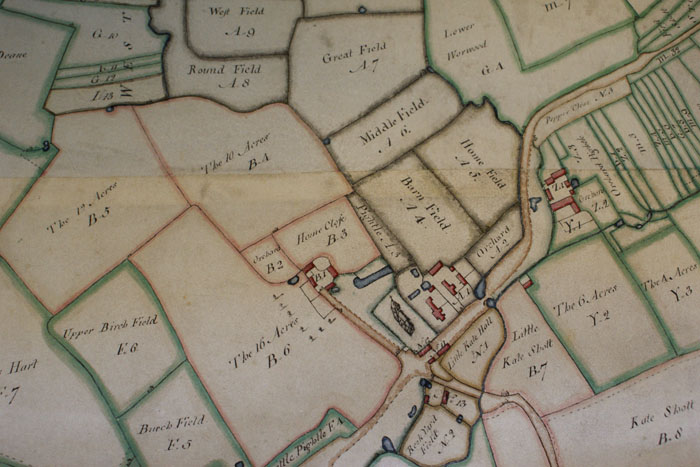 Detail from a survey of Great Greenford parish by R. Binfield, 1775, including Holy Cross church and glebe land (GRE/20). 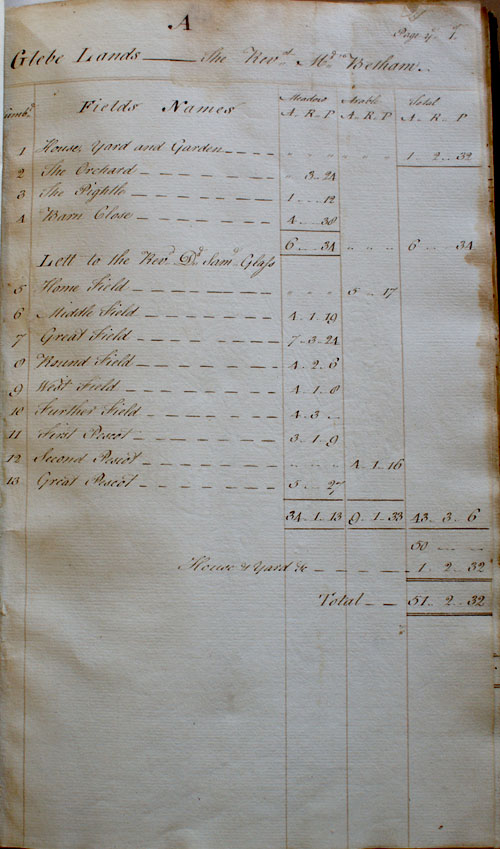 Edward Betham is best remembered for his generous gifts to Greenford Magna and his former Colleges.

In 1780, while he was Rector of Greenford Magna, the Reverend Edward Betham gave £1600 to found a school for poor boys and girls. This school has changed significantly but still retains his name. For a short history of The Edward Betham CE Primary School visit their website.

His gifts to Eton College included a marble statue of its Founder, Henry VI, by John Bacon.

In 1774, Edward Betham gave King’s College a pair of silver-gilt chalices with paten-covers. He also gave the College two hundred pounds' worth of stock in South Sea Annuities, in 1782 (by then an elderly gentleman), with the instruction that the dividends were to be shared among three Scholars or Fellows of the College.

In 1783, the year of his death, he gave Cambridge University £2000, for the maintenance of the Botanic Gardens.

Despite his significant achievements as a Fellow, Bursar and Rector, Edward Betham is best remembered for his generous gifts to the various communities he was proud to be part of. 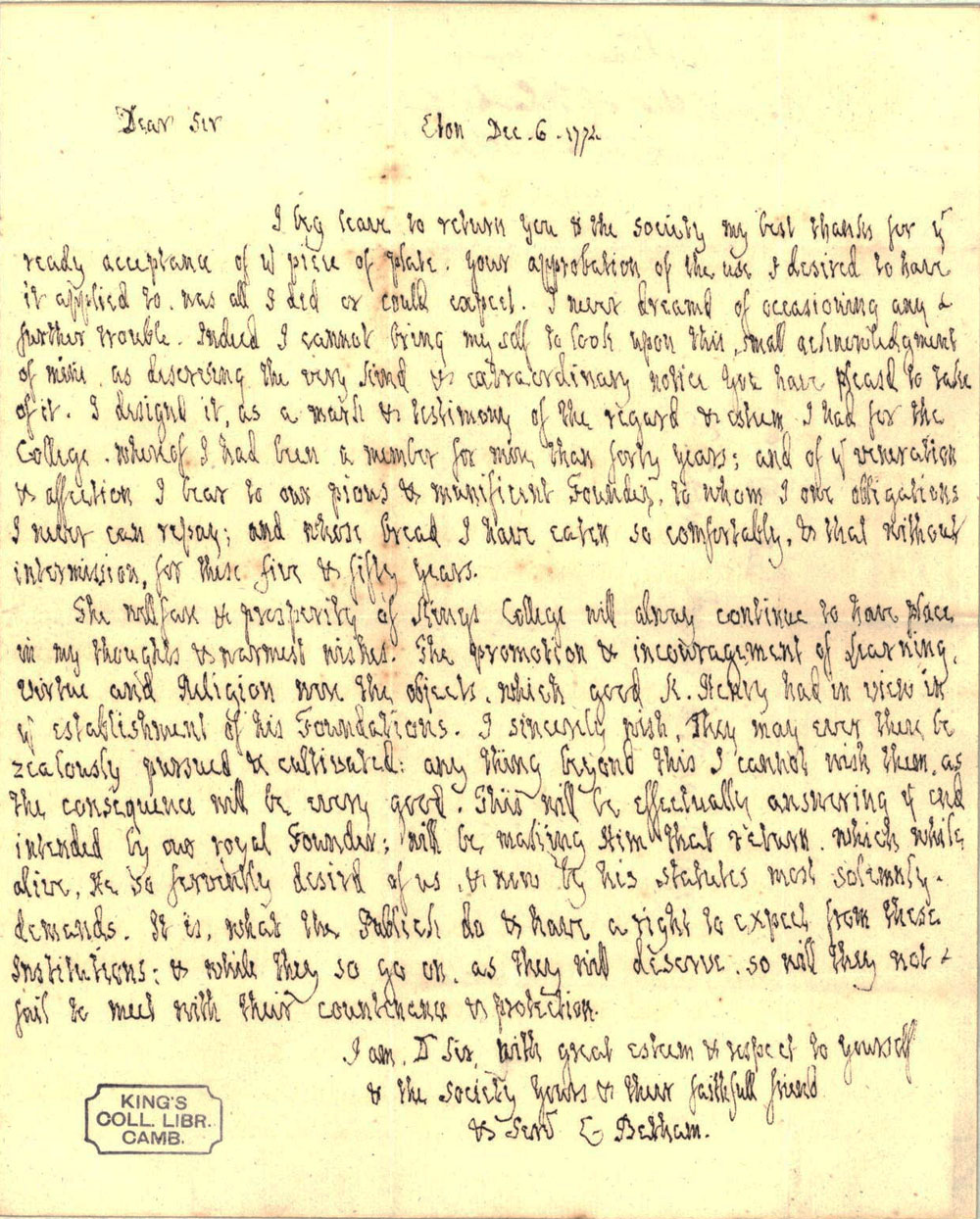 Letter from Edward Betham to Provost William Cook in reply to the Provost's thanks for Betham's gift of plate (cups) to the Chapel, dated 6 December 1774 (Coll. 24. 9a). 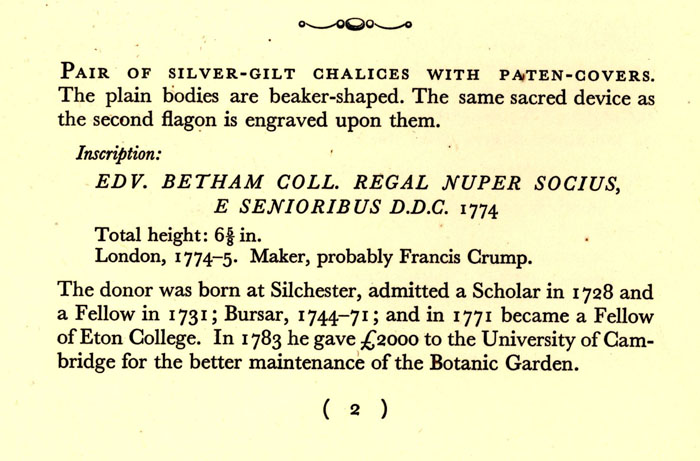 Entry in Catalogue of the Plate, Portraits and Other Pictures at King’s College Cambridge, published in 1933. 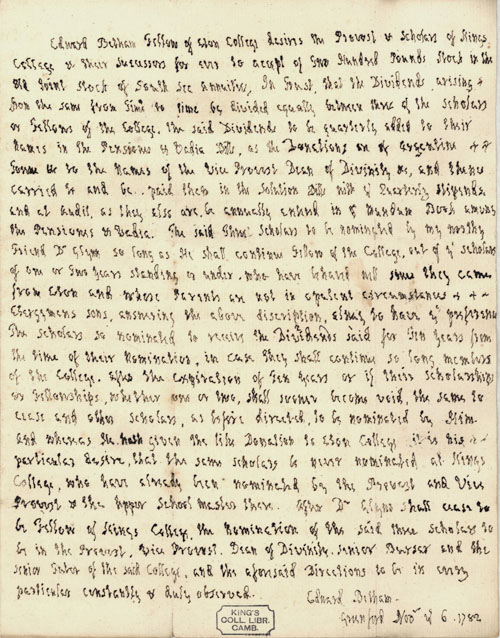