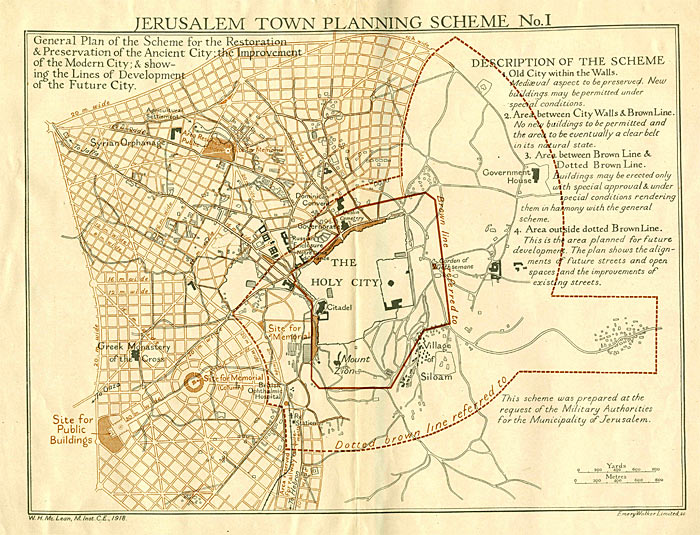 This month we look at drawings and photographs of Jerusalem by Charles Robert Ashbee. Ashbee was an Arts and Crafts architect, who designed a new town plan for the Holy City after the First World War.

He was born in 1863, read History at King's College 1883-86, and trained as an architect under GF Bodley. In 1888, he founded the Guild and School of Handicrafts, first in East London and then in Chipping Campden in Gloucestershire. He established the Essex House Press in 1898.

In 1918 he was commissioned by the British military governor of Jerusalem, Robert Storrs, to prepare a report on the planning and reconstruction of the city following its recent capture from Turkish forces. Ashbee moved from Cairo, where he had been teaching at the university, to Jerusalem to take up the post.

Post-war Jerusalem was in dire need of regeneration and rebuilding. As the city's Civic Advisor, Ashbee did much to promote interest in civic architecture and town planning as well as in decorative craftwork and design.

Ashbee's role as Civic Advisor was an exceptional opportunity for the British architect and designer, one perfectly matched to his abilities, background and interests. His work in Britain had been greatly influenced by the Arts and Crafts ethos of William Morris and he brought these sensibilities with him to the Middle East.

Ashbee produced a lengthy and formidable report for Storrs and the Pro-Jerusalem Society of which Ashbee was the Secretary (1919-22). His mammoth report included six volumes of notes, sketches, photographs and diagrams of the city. Within the volumes Ashbee provided images of Jerusalem as he found it in the 1920s alongside drawings, sketches, and charts of how he envisaged the city after its reconstruction.

Although religious interests restricted what he could do Ashbee did manage to clean up and restore the ancient al-Qattanin souk. He opened a weaving and textile school in the market and introduced Hebronese glass-blowers and tile makers from Turkey and Armenia.

Ashbee also drafted a development plan for the entire city, designed gardens encompassing the citadel "The Tower of David", and began work on restoring the 16th century city walls.

Ashbee and his family lived in the Middle East until 1923 when they returned to Britain.

In 2009 the Archive Centre acquired the sketches, photographs, plans/maps and notes Ashbee produced whilst assembling his report for Storrs. The images below provide a sample of this intriguing collection.