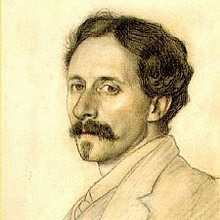 Charles Robert Ashbee (known as C.R. Ashbee) came up to King’s College in 1883 to study the Historical Tripos. As a student, he developed an antiquarian interest in architecture. The friends he made at that time, as well as the books he read, had a profound influence in his subsequent career. In the title of his biography on Ashbee, Alan Crawford described him as an ‘Architect, Designer & Romantic Socialist’.

To understand Ashbee’s work, not least in establishing the Guild and School of Handicraft (sometimes known by variants of that name, such as the ‘School and Guild of Handicrafts’ or just the ‘Guild’), one must know the ideology underlying his achievements. These achievements were as much in social experiments as they were in architecture or handicraft. As such, we will start the exhibition with an exploration of that ideology. 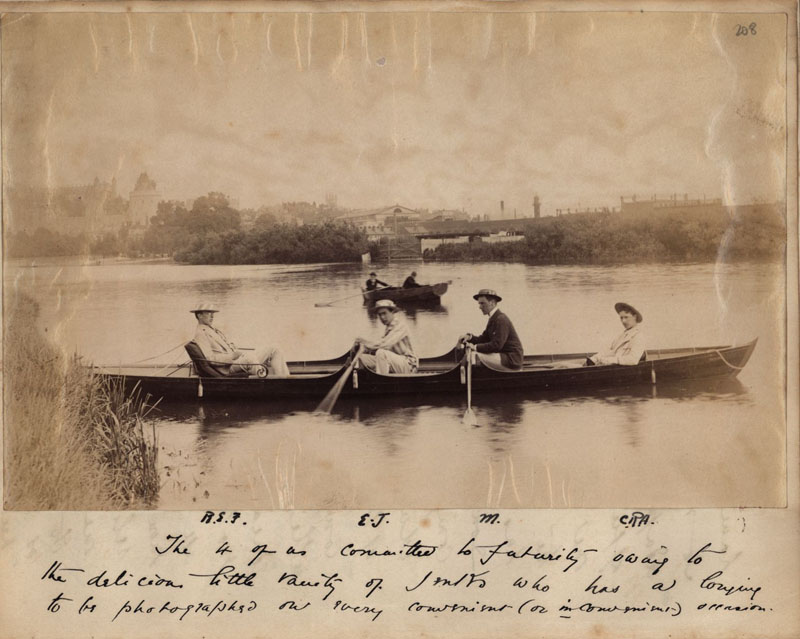 Through friends Ashbee made at King’s College, such as those with Goldsworthy Lowes Dickinson and Roger Fry, he learnt to accept his own homosexuality, which was still illegal at that time and those who were comfortable discussing it would have been somewhat before their time. Ashbee enjoyed intellectual conversations with Dickinson, while his friendship with Fry enabled him to explore a shared antiquarian interest in church architecture, with regular visits to Cathedrals during which they would both produce sketches.

In May 1885, Dickinson went to work on a co-operative farm called Craig Farm, in Tilford, Surrey, which was run by Harold Cox. This farming experiment failed and Dickinson seems to have found it rather dull but the ideology still seemed to appeal to him. It was through Cox that Dickinson and his friends were introduced to Edward Carpenter, a socialist author and advocate of the simple life. Carpenter had a farm at Millthorpe, near Sheffield, and split his time between market gardening, writing and socialist campaigning. He believed that love between men could break down class barriers. Ashbee met him for the first time on 14 May 1885. Over time the group got to know each other better, attended socialist lectures and discussed such topics as Plato and Walt Whitman. These discussions influenced Ashbee a great deal, as shall be seen throughout this exhibition.

In 1886, having graduated, Ashbee moved to Toynbee Hall in Tower Hamlets, in the East of London. Here, graduates from Oxford and Cambridge lived and worked among the poor, with the intention of bringing about social change and improvement.

Ashbee maintained his friendships, or ‘comradeships’, with his Cambridge friends and Carpenter. He went on sketching trips with Fry, as well as travelling Europe alone and sending him letters and sketches. Ashbee continued reading Ruskin and started to lecture on his writings.

Following letters of introduction from the likes of John Henry Middleton (architect and later archaeologist, museum director and Fellow of King’s College) and an interview, Ashbee started work as an articled pupil for the renowned architects Bodley and Garner on 19 October 1886. He seems to have admired fellow student Ninian Comper, although their careers took very different paths. His colleagues were known for their work in Gothic Revival, whereas Ashbee’s next move would see him carving a career in the more modern Arts and Crafts movement, as well as his social experiments. Though Ashbee rejected Bodley’s style of architecture and even criticised the quality of his figurative drawing, his correspondence suggests he always respected his former mentor.

In his memoir, Ashbee shared an anecdote about how he nearly died while working on Bodley’s reredos in St. Paul’s Cathedral.

In his recent book on George Frederick Bodley, Michael Hall suggested that Ashbee admired Bodley for his sense of vocation. He also thought it likely that it was through Ashbee’s advocacy that Bodley was commissioned to design his building at King’s College, and that Ashbee may have assisted in the drawings. If his time with Bodley influenced Ashbee’s later work, it was more to do with the office’s work ethic than its architectural style.

In 1902, Wolverhampton brewer Lawrence Hodson considered commissioning Ashbee for a church but questioned his acceptability to Anglo-Catholic tastes. Ashbee’s reply not only discussed the Arts and Crafts movement in this religious context; it also highlighted the experience he had gained under Bodley.

Start of the Guild

In 1886-7, Ashbee delivered a series of lectures on John Ruskin at Toynbee Hall. Through public lectures, word spread and his Ruskin class grew in numbers. It was to prove a precursor to a greater project of his…

To put some of the principles on the dignity of manual work which were discussed in Ruskin class into practice, Ashbee and his students decorated the Dining Room at Toynbee Hall. After a talk by Kegan Paul at the opening of the Dining Room, on 8 September 1887, Ashbee wrote that there had been the ‘inauguration of an Idea’. The Idea was essentially to form a new kind of art school which ran alongside a guild-style workshop, combining the ideals of Ruskin, William Morris and Carpenter through labour and comradeship. Ashbee believed that through Craftsmanship and Comradeship the arts could be a great ‘leveller’.

He had discussed art schools with Burne-Jones a month earlier. Ashbee had invited friends like Fry and Carpenter to the opening of the Dining Room so he may have wanted their advice or simply realised the significance of the event. After the opening of that event, he held further discussions on his Idea. In October 1887 he discussed guilds with Carpenter and that December he met Morris, although the latter was rather discouraging. Though Ashbee had had an Idea, the way in which it would be achieved had yet to be determined.

The Idea soon came to fruition, in the form of the Guild and School of Handicraft, which was formally inaugurated on 23 June 1888. This was to become a school and an independent Guild workshop, with members of the workshop educating the students. The school received funds from the public for a two-year trial. For the workshop, Ashbee rented the top floor of a warehouse at 34 Commercial Street, very close to Toynbee Hall. The first crafts carried out were woodwork, metalwork and decorative painting.

The Guild started relatively modestly, with just four members. Fred Hubbard carried out decorative painting and general administration. John Pearson was the senior metalworker. John Williams was also a metalworker, and C.V. Adams was a cabinet-maker. As the Guild was intended to promote collaboration, its members often crafted each other’s designs. Their backgrounds were quite varied so Ashbee tried to support their development, for example sending John Williams to see Roger Fry in Cambridge, in the hope that the craftsman would be initiated into the ‘mysteries of Cambridge’ and shown ‘the best things in the way of decorative art’. Fry was to ‘put some animal magnetism into him’, as Williams was ‘one of those stron silent receptive natures that love you for what small kindness you can give them’.

Start of the Guild (continued)

Success of the Guild

The success of the Guild and School of Handicraft in its early years came amidst the development of relevant resources and movements. The City and Guilds of London Institute, established in 1878, was funding trade classes. In 1884, the Art Worker’s Guild was formed. On 25 May 1887, T.J. Cobden-Sanderson coined the term ‘Arts and Crafts’; and the Arts and Crafts Exhibition Society was formed the following year (the same year as the Guild and School of Handicraft). Guilds had been popular in medieval times but Ashbee’s approach was new and his timing allowed it to thrive in its early years.

In January 1889, Ashbee’s Guild formed a committee, enabling the establishment of rules and the sharing of profits. The first twenty pounds of any member’s wages were used as a capital investment in the Guild. Idealogically, Ashbee moved away from the form of philanthropy associated with Toynbee Hall, which led to a gradual physical move. After the Easter of the year, Ashbee moved to 49 Beaumont Square but his Guild remained in Commercial Street temporarily. In 1891, the Guild moved eastwards to Essex House in Mile End, London, where it was to remain for the next eleven years.

An application for a grant, made to the Technical Education Board in October 1893, proved unsuccessful. After being cut to just Friday evenings and Saturday mornings in September 1894, the School closed down completely on 30 January 1895.

In April 1898, Ashbee established the Essex House Press. For this purpose, he had bought the Kelmscott Press presses from the estate of William Morris. Not only did the quality of the materials used, the print and the woodcuts demonstrate the craftsmanship of the Guild; the choice of books which were published either reflected Ashbee’s longstanding interests or acted as a vehicle through which to spread the word about his Guild. The Essex House Press developed the very distinctive pica typeface, which was first used in An endeavour towards the teaching of John Ruskin and William Morris, published in 1901.

In July 1898, the Guild was registered as a limited company and the following spring saw them opening a shop at 16A Brook St, in the West End of London. The end of the School appears to have allowed the Guild to become even more successful.

Success of the Guild (continued)

Continue to read the second part of this online exhibition focusing on the life and works of C.R. Ashbee.
Read more

Index page to the Archive Centre's online exhibitions, which each highlight a particular aspect of the College's history.
Read more
Catalogue of the CR Ashbee papers on ArchiveSearch