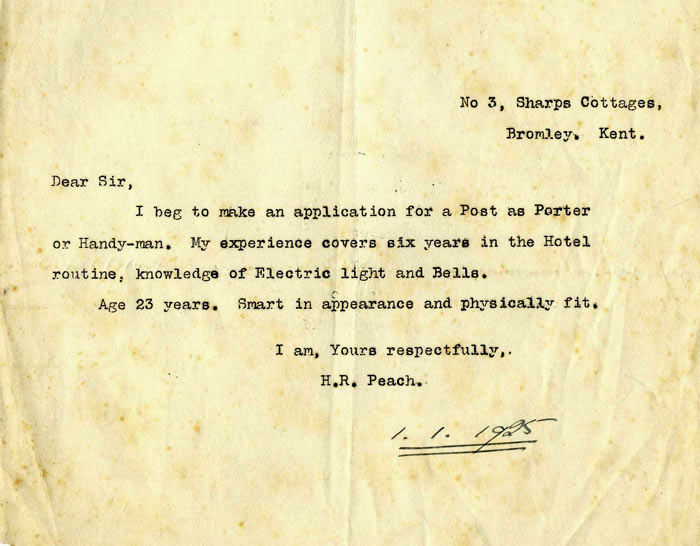 Picture Cambridge between the World Wars, what do you see? Images of black-robed fellows, top-hat sporting 'bulldogs' and hordes of young men in crew jackets drinking champagne may spring to mind. But beneath the glamour and glitz of the boathouse and High Table there was another world.

This was the world of the gyp, the bedder and the porter. Instead of Latin grammars, Greek anthologies and philosophical treatises the inhabitants of this 'other' world turned to the more prosaic brush, pan and tea kettle to complete their College obligations. They appear in novels such as Porterhouse Blue and in films such as Chariots of Fire as 'below stairs' types - or in college terms 'below staircases'. College servants did everything from patrolling the college grounds to polishing boots and boiling eggs. The college could not have functioned without them.

This month's documents highlight the variety of tasks, posts and responsibilities which were shared out among the college servants. Both men and women worked within King's walls. Their roles were predictably defined by gender and reflected the working environment in the outside world.

College posts were highly coveted and were considerably better paid, and often more secure, than agricultural or factory work. The College provided the servants with meals, a pension and financial support if they fell ill or were disabled. It also provided accommodation in some cases. Most college staff were extremely loyal. They cheered on the college boat at the bumps, and would stay for decades. Even today retired staff are invited to an annual winter party and the Provost's garden party. Long-serving staff retirements and deaths are recorded in the College's annual report.

In his book 'Five Years in an English University' (written for an American audience in the 1840s) Charles Astor Bristed chronicled the life of a Cambridge undergraduate. Although Bristed was writing during the nineteenth century, not much appears to have changed 'below the staircases'  in Cambridge colleges during the inter-war period.

He describes the bedders or bed-makers as "the women who take care of the rooms... For obvious reason they are selected from such of the fair sex as have long passed the age at which they might have had any personal attractions." (p. 16). The gyp, he says, is "a college servant, who attends upon a number of students... [who] calls them in the morning, brushes their clothes, carries parcels for them... and waits at their parties and so on." (p.15). The word 'gyp' now only refers to a 'gyp room', a kitchen provided for students.

We are open by appointment four days a week most of the year - please contact us by email or phone to book your visit.
Read more
Catalogue of historical records of King's College servants and staff (Janus)