The Fountain: King's own Water Feature 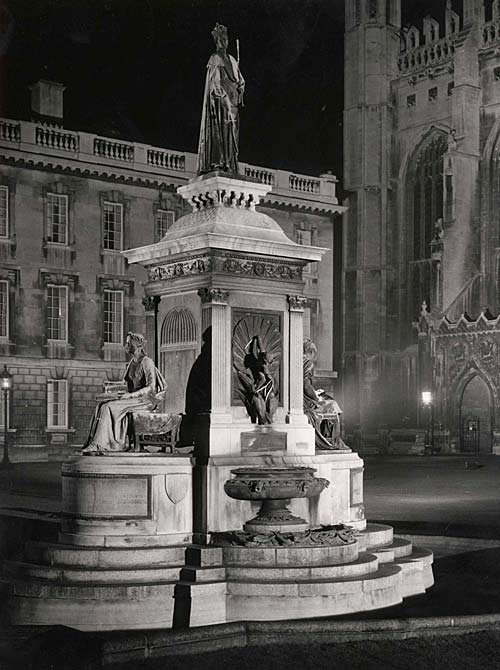 How do you introduce movement, sound and light into your backyard (or even your front court)? Add a water-feature of course! Every gardener knows that a fountain can transform the 'ordinary' into something extraordinary. Even Henry VI realised this when he was planning the College - his original plans included a conduit or aqueduct in the position of the current Fountain on the front lawn.

Nikolaus Pevsner wrote in his 1954 guide to Cambridgeshire that the fountain is "... not too big to distract attention from the major sights though too small to be appreciated by anybody not allowed to walk on the grass." So, this month we get up close to the Fountain - or at least to some of the documents related to its commission, design and construction.

Armstead also worked on the external decorations of the colonial office in Whitehall and created some of the figure sculptures on the southern and eastern sides of the podium of the Albert Memorial in London.

Each part of  the Fountain has a meaning. The structure is topped by a statue of the founder, Henry VI, dressed in his royal robes with crown and sceptre 'gently offering the College its Charter'. Seated to his left below him is the figure of Religion holding a model of the Chapel resting on the Bible.

To the right of Henry VI is Philosophy, also seated, studying an open scroll and facing the Chapel. She has a celestial globe next to her and the staff of Asclepius, the Greek god of healing.

In the centre of each of the east and west sides is a small bronze figure of a boy in front of a shell background (a popular Victorian motif) with two spurting dolphins. Below them are 'vases'. Carved at the base of the Fountain are the shields of King's College and Eton College.

Armstead completed the bronze statues of the Founder, Religion and Philosophy in 1877. The three were exhibited at the Royal Academy until their installation in 1879.

Portland stone formed the main body of the Fountain originally. Erosion led it being replaced by Cornish grey granite in 1902.

In 1949, according to an entry in George Salt's garden journal, the Garden Committee voted unanimously to recommend to Council that the basin of the Fountain be turned into a flower bed. Salt convinced the Council to install a pump to re-circulate the water so that the fountain could flow continuously and avoid "the stagnant mess." This pump was installed in 1951.

More recently the the Fountain's stonework has been conserved and its basin re-surfaced to prevent leakage and to allow for the fountain to flow again.

We are open by appointment four days a week most of the year - please contact us by email or phone to book your visit.
Read more
Catalogue of the papers relating to the Front Court (ArchiveSearch)
Henry Hugh Armstead (ODNB)