The Battle for Britain: King's on the Home Front

RAF soldiers and transport vehicles were billeted at King's during WWII

"When war actually broke out, there was an element of relief mingled with horror and apprehension," wrote L.P. Wilkinson in his book A Century of King's 1873-1972. He describes the uncertainty of the early weeks of World War II at King's as a period of confusion and ambiguity.

At first life continued as normal, with students encouraged to come up to Kings. They pursued their studies until they were called up for duty, but behind the routine lurked the spectre of what was to come.

By 1942-43 the university had developed a scheme which allowed men to come up to Cambridge as cadets and study for two terms whilst doing their military training. This period of residence and the passing of a cadet's examination would contribute to a 'war degree' if they returned after service.

As the war intensified many of the Fellows were called away from Cambridge to fulfil roles for which they had been earmarked earlier. Those left behind in College helped the war effort in the early days by fire watching from the Chapel roof and trench digging outside the choir school, including a zigzag trench intended to serve as an air raid shelter.

Soon after the declaration of war, the Principal of Queen Mary College, London, shrewdly evacuated his college to the relative safety of the 'countryside' in the guise of King's College. In addition to the 50 or so students from Queen Mary, King's housed 100-170 of its own students during the first years of the war.

The College welcomed Queen Mary's teaching staff at High Table and invited its students to join the College's clubs and societies. Records show that Queen Mary was an easier fit than the RAF soldiers billeted within the College.

The housing of the military caused a number of problems, one of which was that the RAF's presence put extra pressures on College servants whilst the Army was conscripting them. Letters between the Bursar and the RAF squadron leader highlight the tensions between the College and the soldiers. The two 'camps' waged a war of words over bicycles, light bulbs, potatoes, powdered eggs, china mugs, filing cabinets and sausages throughout the period the squadron was based within the College.

During the war King's, like all of England, suffered under air-raid precautions, black-outs and rising shortages. By the end of 1941 the Chapel windows had been replaced with black tar paper which rattled thunderously in the wind. RAF transport vehicles were parked under the trees on the backs and blue light-bulbs and blackout blinds were in place in all the rooms. New literary, political and dramatic societies such as Consolidated Operas Incorporated (C.O.I.) sprang up as the black-out kept Fellows and students indoors. Some of these societies like the C.O.I. continued into the post-war period.

Regular College activities were sorely affected by the war. Daily choral services were eventually dropped as Choral Scholars were conscripted. The traditional Christmas season concerts were maintained, though the 1940 Christmas Eve broadcast service was accompanied by the drone of aeroplanes during the Battle for Britain.

The Founder's Feast wasn't celebrated in 1940, and the planned festivities for the 500th Anniversary of the College's Foundation in 1941 had to be scaled down. However, even with the black-out curtains and food shortages the Fellows and scholars still managed to sit down to a war time feast of roast swan to mark the occasion. The 'feast' was especially sanctioned by the Ministry of Food.

Whether billeting soldiers amongst the students, raising morale in the Chapel, or through the individual efforts of its members such as John Maynard Keynes, Alan Turing and Ronald Balfour, King's College played a part for the Allies during the Second World War. This month's selection of documents brings to life some of the trials and tribulations those on the home front at King's endured 'doing their bit' for the war effort.

Gallery 1 - The Battle for Britain: King's on the home front 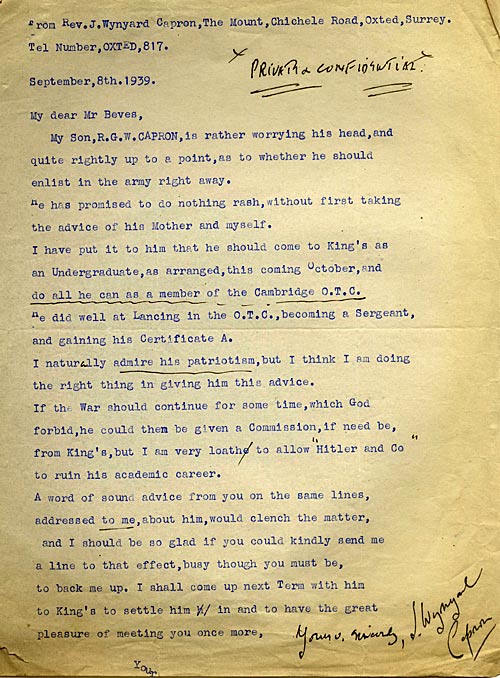 Letter to tutor Donald Beves from Rev. Capron about Capron's son joining up 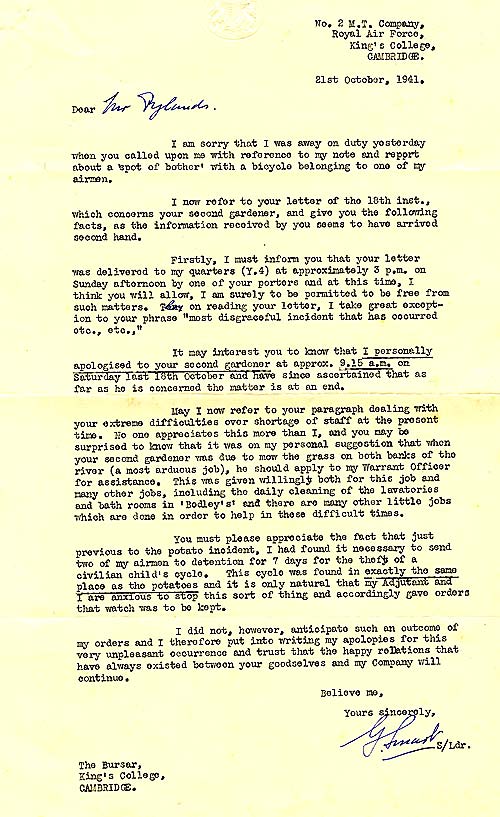 Letter to the Bursar G.H.W. Rylands from RAF Squadron leader about thefts within the College 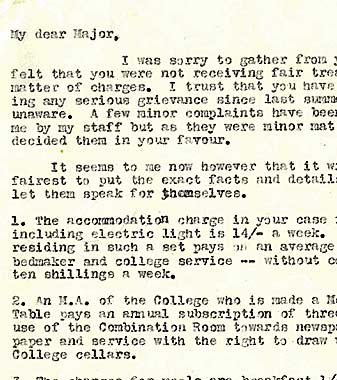 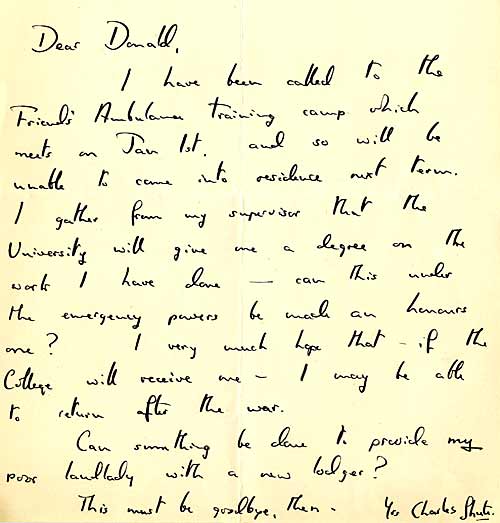 Letter from a student informing Tutor D. Beves that he had been called up for duty 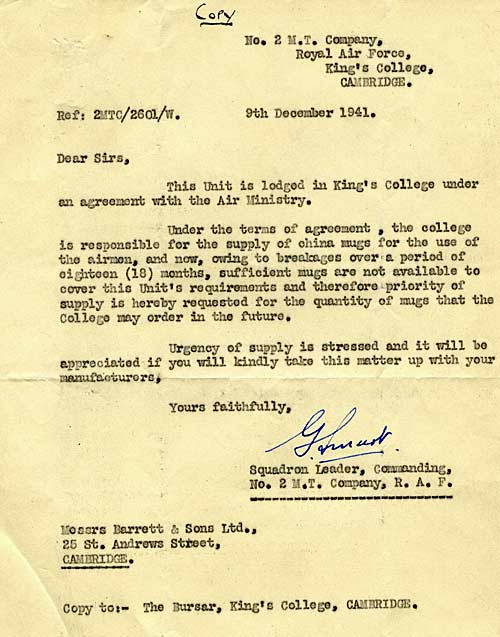 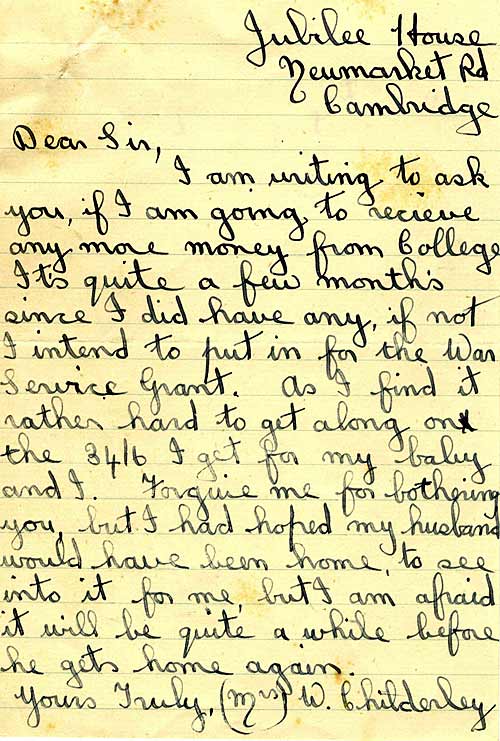 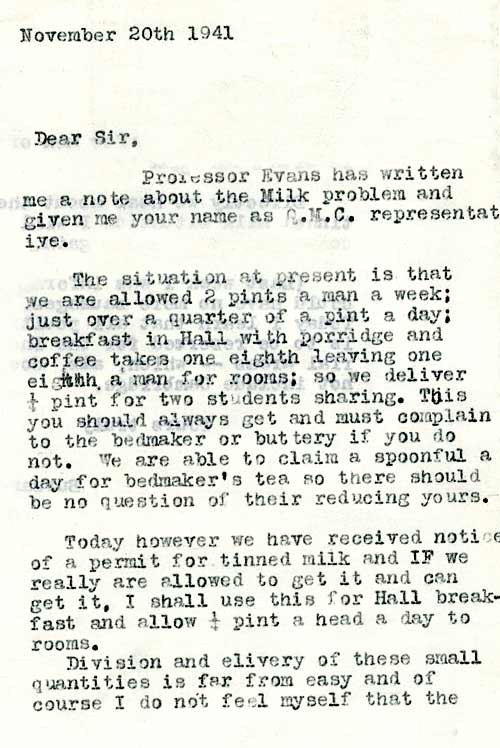 Bursar writing to request more milk for the College 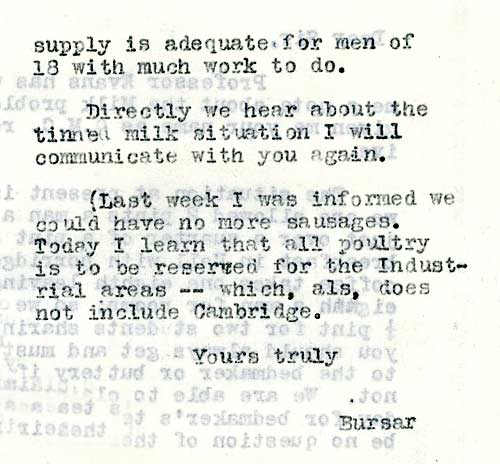 The Bursar writes to request more milk for the College

Gallery 1 - The Battle for Britain: King's on the home front 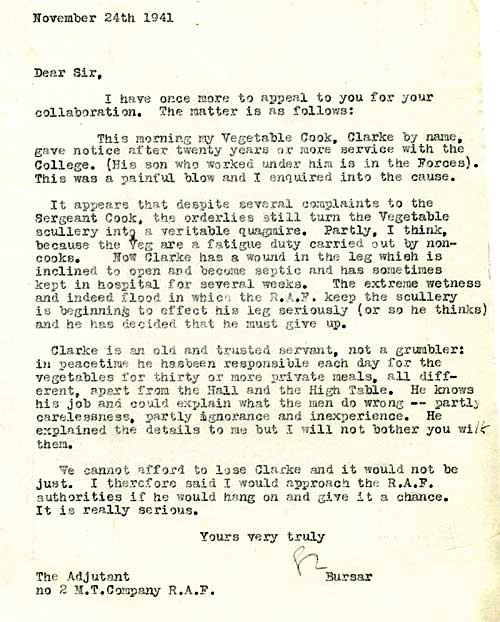 Useful Sources - The Battle for Britain: King's on the home front