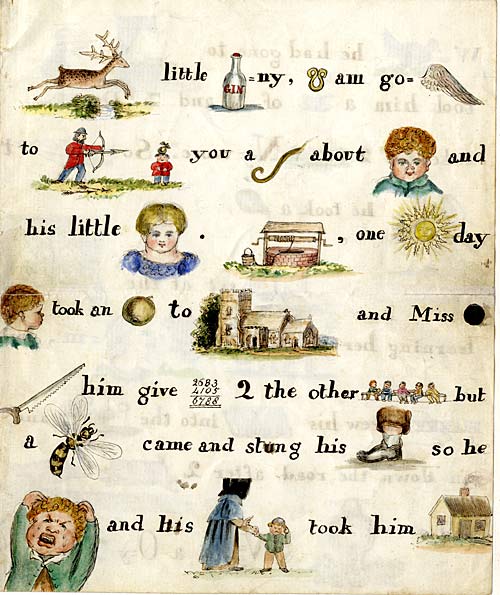 For many of us, sitting down with a pot of tea, a plate of biscuits and The Times crossword puzzle is an enjoyable way to spend a rainy afternoon. In the past, rebus-letters (or "enigmas") provided similar enjoyment. The archival document presented this month is a Victorian rebus-letter from the collection of William C. Green, who came up to King's in 1851. The letter was written by Green's sister-in-law Mary Tovey to Green's daughter Jeannette.

A "rebus" is a type of word puzzle that uses pictures to symbolize words or parts of words. Sometimes the picture is a literal representation of the word and sometimes it is a short visual pun. Today they are most often seen in coats of arms and children's activity books. In heraldry the rebus provides a clue as to the owner of the coat of arms; for example Mr Keyes-Lyon might show keys and lions on his coat of arms. This practice is called "canting" and it was quite common in the Middle Ages, particularly in continental civic heraldry. It has become increasingly used in the twentieth century within the British royal family. Princess Beatrice of York uses three bees ("bees thrice") on her coat of arms.

Widespread creation of enigmas and word puzzles began in the fifteenth century. Books of riddles and word puzzles were published such as Demaundes Joyous (1511) and A Little Book of Riddles (1656). Anagrams and acrostics appeared in books, magazines and almanacs. This was not simply juvenile amusement - even high-brow literary journals were known to publish the odd word puzzle. Famous writers, poets and statesman such as Jonathan Swift, David Garrick, Horatio Walpole, and William Cowper fashioned and solved puzzles for their own entertainment and the amusement of their contemporaries. Lewis Carroll wrote rebus letters, nonsense letters and mirror letters (which had to be held in front of a looking-glass to be read) to the children he befriended. Between friends, rebus letters could also function as a form of secret code.

Quasi-phonetic rebuses often formed the foundation of children's stories and riddles were used widely in this fashion in the nineteenth century. The most accessible rebuses are composed of letters of the alphabet printed in different colours, sizes, and fonts which illustrate popular expressions and phrases. For example the letter "C" might stand for the word "sea" or "see". More challenging rebuses replace a word with an image, and require us to make a sometimes tenuous connection between the two, as when Mary Tovey in the example below draws a bow tie to represent "tired".

We are open by appointment four days a week most of the year - please contact us by email or phone to book your visit.
Read more
Catalogue of the William Charles Green Collection (ArchiveSpace)