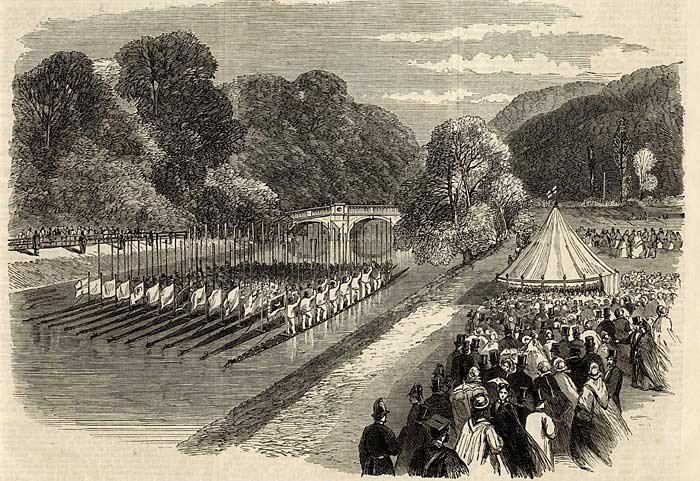 Engraving of boats on the River Cam to mark the Prince and Princess of Wales' visit to Cambridge, 1894. (KCHR/4/1)

Royal visits to King's College date right back to 1446 when Henry VI came to lay the foundation stone of the Chapel. The visits have continued right up to the present day.

It is even rumoured that Elizabeth I may have visited the Chapel and spent the night in College in 1564 when she toured Cambridge -  sadly nothing can be found in the archive to support this.

But there are plenty of documents and images to mark other royal visits.

In 1864 and 1894, the Prince and Princess of Wales visited Cambridge and on both occasions the royal party attended Chapel and dined in the Hall.

King George VI, Queen Elizabeth and Princess Margaret attended a Service of Thanksgiving for the Preservation of the Chapel in 1951.

Queen Elizabeth II visited Cambridge in 1962 and was shown Rubens' Adoration of the Magi in the Chapel. The Queen visited the College again in 1991 and 2009 with Prince Philip.

Princess Margaret made a number of visits to King's, and spent the night in the Provost's Lodge on some of these occasions.

On the surface, royal visits appear to run seamlessly and with great decorum. Achieving this has always been a challenge, and the whole operation is very much like a complicated dance. All the participants must know their parts, even the Royals!

As might be expected, inviting a Royal to visit is not an easy task. Buckingham Palace suggests that a letter to the Queen might be all that's needed. However those who have been through it describe a baroque process in which a member of the great and the good contacts someone else who 'does lunch' with someone who has connections to a palace official - needless to say this can take some time!

Correspondence found in the archive between King's and Buckingham Palace reveals that on a number of occasions the College had almost given up hope of the visit ever happening. But then miraculously a letter would appear from the royal household accepting the invitation and setting the whole process in motion.

The protocol concerning a royal visit has been set in stone for generations and although the emphasis today is on informality records reveal that in fact a lot of careful planning goes into such an event. The archives hold numerous files filled with correspondence, annotated menus, amended seating plans and modified guest lists for supposed 'casual' or 'low-key' royal visits to the College.

Even on very short 'unofficial' visits an entourage must accompany the Royals to assist with transportation, decorum, security, clothing, jewellery and grooming. Shortly before Princess Margaret paid an 'informal visit' to the Provost's Lodge, a letter arrived from Kensington Palace alerting the College to the fact that the Princess would be accompanied by both her lady-in-waiting and her dresser. This was in addition to her driver and security detail - quite a number of bodies for a 10 hour visit!

Records in the archive reveal the minutiae covered by the Royal Household and the College for each royal visit - everything from 'retirement' facilities to umbrellas is outlined and agreed upon.

Every royal visit has unique characteristics and the documents below serve to highlight the effort required to orchestrate such an event.

We are open by appointment four days a week most of the year - please contact us by email or phone to book your visit.
Read more
Website of the British Monarchy