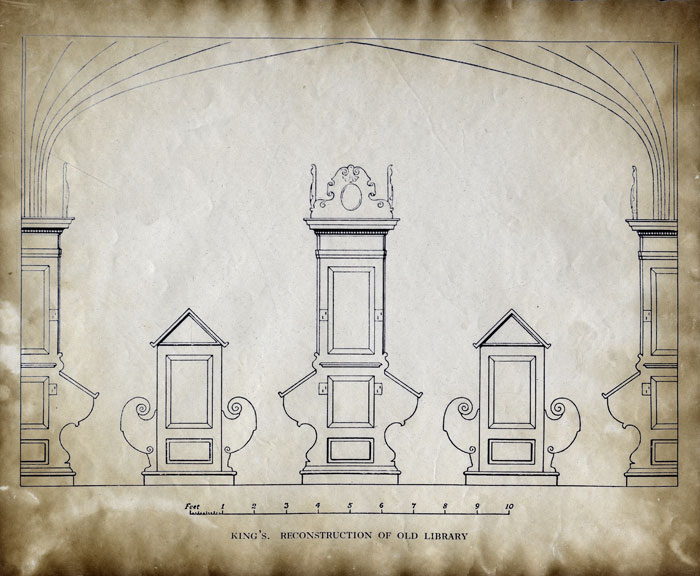 Photostat of a cross-section of the furnishings of the Chapel Library, undated, inverted for this website (Coll Photo 1097)

The library is one of the defining features of an institution like King’s College. As such, one might expect it to be relatively unchanging, simply acquiring new books. On the contrary, the library at King’s College has had an interesting history including two relocations.

The first volume of the King’s College Mundum books, an early form of accounts, shows that books were bought, bound and chained for the library, then housed in the Old Court, as early as 1448.

The library is now housed in the Wilkins building, which was only built in 1828, so you may wonder what happened to the library in the centuries between 1448 and 1828.

Provost Goad helped to answer this in his response to accusations by the Fellows, dated 24 April 1576. Answering the Fellows’ question ‘What hathe ben done sence my tyme to the furtheraunce of learning in the colledge’, he replied ‘…I have caused a fayer newe librarye to be made and furnished with bookes, specially of divinitye, bothe of ould and new writers: whereas, before my tyme, the library was utterly spoiled, and this coaste upon the new librarye without eny charge in the colledge accomptes...’ This improved library was situated in the southern side chapels of the King’s College Chapel. Goad’s response was sent to the Bishop of Lincoln, in his capacity as the Visitor for King’s College (and thus responsible for settling disputes), so the original is not part of the College Archives.

The library now connects the Wilkins building and the Old Provost’s Lodge, instantly recognisable because it passes across cloisters. Comparison with Wilkins’ original architectural drawings show that there have been significant changes to this part of the College. Since 1922, the library has extended into the upper floor of the Old Provost’s Lodge and it has also gained space in the new Provost’s Lodge’s attic, built in 1927. The cloisters did not appear until 1934, taking the place of a small passage and servants’ rooms. In 1921, the Muniments room, the home of the College archives, was moved to the old lecture-room below the library (to the left of the ground floor library entrance), creating space in the side chapels. The muniments were subsequently moved to the far side of King’s Lane and in 1993, thankfully, the muniments were combined with the Modern Archives and moved to a position convenient for the new reading room.

Heywood, J. and Wright T. (2012 reprint), The ancient laws of the fifteenth century, for King's College, Cambridge, and for the public school of Eton College,  Nabu Public Domain Reprints

We are open by appointment four days a week most of the year - please contact us by email or phone to book your visit.
Read more
Visit the Library's Special Collections Blog