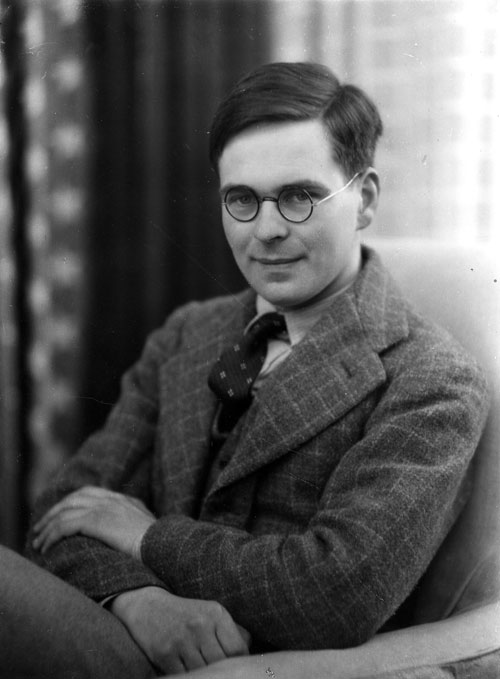 John Saltmarsh has been described as ‘everyone’s idea of the eccentric bachelor don’. His lectures on the history of Grantchester, King’s College and its history were always popular, and within the Archive Centre he is considered the ultimate authority on these topics.

Born in 1908, Saltmarsh was brought up on a farm in Oakington, Cambridgeshire. He went with a scholarship to Gresham’s School at Holt, in Norfolk. In 1926 he matriculated at King’s College with a Scholarship. His flair for history is said to have been noticed immediately and he gained a double first in the History tripos.

His family history has been traced his ancestors back to a Saltmarsh knighted by William the Conqueror in 1067. Saltmarsh was initially interested in the history of East Anglia, possibly due to his own history. Over time his research became increasingly focussed on Cambridge, then King’s College and its Chapel. His dissertation ‘The Employment of the Estates of King’s College in the Fifteenth and early Sixteenth Centuries’ earned him his Fellowship in 1931. Three years later, he was appointed Steward of the Manors.

Saltmarsh became an Assistant Lecturer in History in 1936 and a full Lecturer the following year. He was also the College Librarian from 1937 until 1947. His early lectures included economic history from the ancient Britons to the industrial revolution. One of his duties as Librarian was to work out air-raid precautions for the Library.

He had been involved in plans for a six volume ‘Memorials of the College’ to mark the quincentenary of the foundation; however this project was abandoned due to the start of the War. He served as Vice-Provost from 1955 until 1961.

The appointment of ‘Tim’ Munby as the College’s first full-time Librarian, in 1947, enabled Saltmarsh to become the King’s College first official Archivist. He had performed the duties associated with this title in an unofficial capacity since 1929. His work in the archives was invaluable, greatly enhancing our understanding of the College’s history as preserved in its administrative records.

A compulsive compiler of fascinating lists, he aggregated data from records such as the Mundum books (early financial records, written in Latin) and estate papers, to write his histories and lectures of the College and its land throughout the country.

Guide to the Modern Archives

The personal paper collections of famous Kingsmen are especially strong in early 20th century literature, fine art and economics.
Read more
Catalogue of the papers of John Saltmarsh on ArchiveSearch