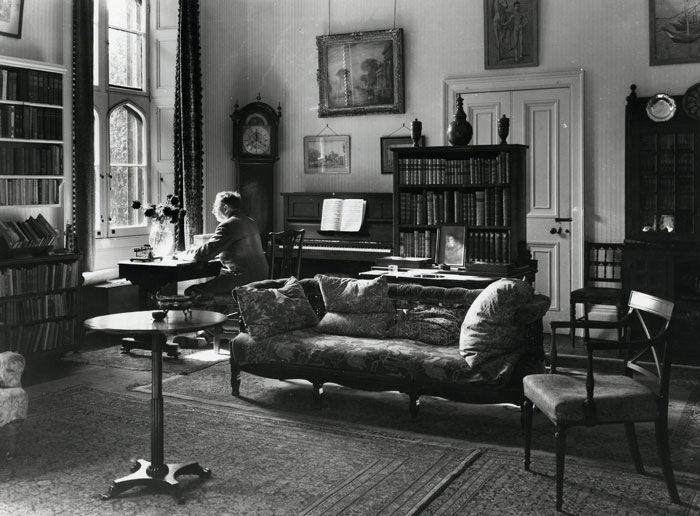 This month we step inside the King’s College buildings to see a selection of noteworthy rooms, including the rooms of famous members of the College. This is a chance to see whether the writer and Fellow EM Forster had a tidy sitting room and how Victorian students decorated their rooms.  It also shows some of the records we have about which rooms were occupied by various Kingsmen, whether notorious, illustrious or just of local interest.

The College did not start furnishing students’ rooms until after the appointment of Edward Shire as Third Bursar, in 1935. This means that many of the photographs on this page  reveal a lot about the occupants. Traditionally, students had a ‘set’, comprising a sitting room and a bedroom, sharing other facilities with their close neighbours. Some students still have ‘sets’ but most student rooms are now en suite bedrooms.

Some Kingsmen even had their rooms decorated by artists in the Bloomsbury group, such as JM Keynes, the Bursar and economist, whose room in the Webb’s building, later occupied by Bernard Williams, the philosopher and later Provost, featured murals painted by Duncan Grant and Vanessa Bell.

As you might expect, rooms have changed significantly over the years, so these pictures may enable you to imagine what they were like in the late-nineteenth and early-twentieth centuries.

The Chapel east end before the installation of Rubens’ 'The Adoration of the Magi' (Royal Commission on Historical Monuments in England, 1945; Coll-Ph-738)
J Le Keux’s engraving of the interior of King’s College Chapel including the screen

Buildings, Grounds and Gardens section of the College Archive catalogue on ArchiveSearch

We are open by appointment four days a week most of the year - please contact us by email or phone to book your visit.
Read more
Transcript of E.M. Forster’s ‘Locked Diary’ includes entries relating to Maurice