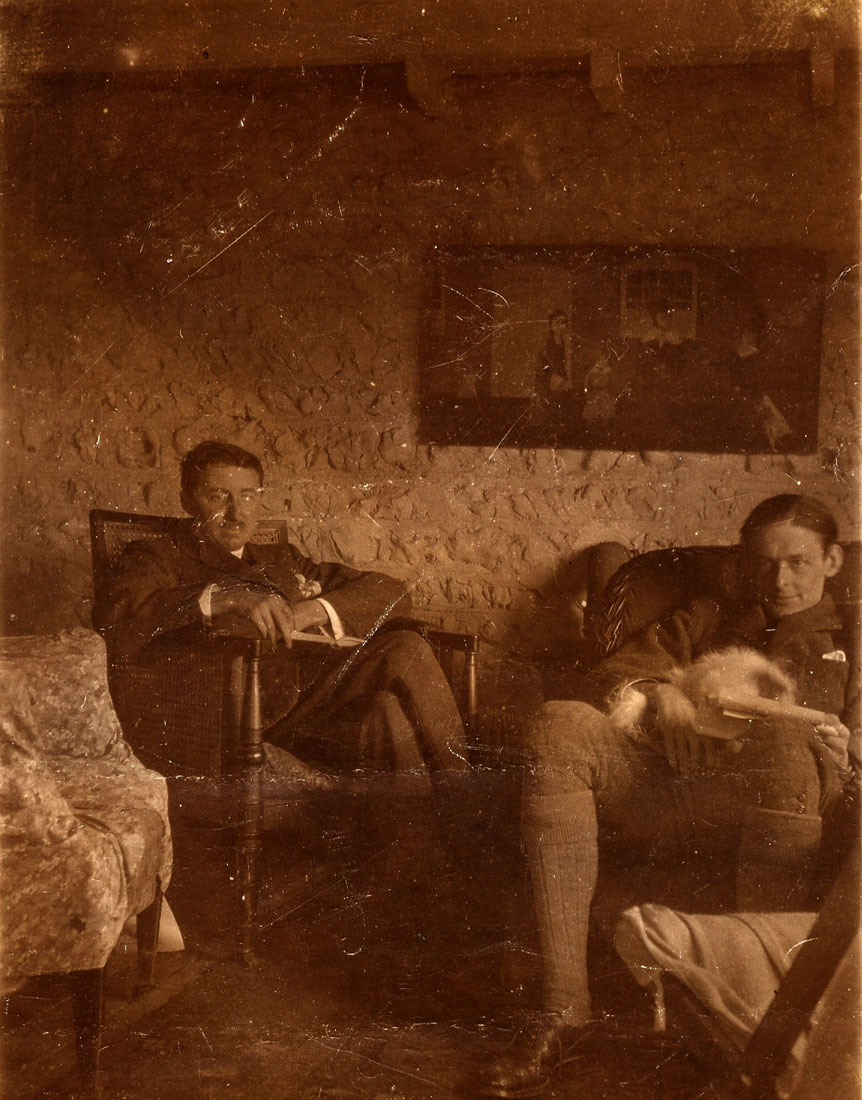 One notable cat-loving Kingsman was EM Forster. In his West Hackhurst journal he noted with distress that moving house had put his cat Verouka ‘in a dreadful state of nerves, as he fell through the bottom of his box’.

Another of Forster’s cats was called Toma. Faber (TS Eliot’s publishing house) had a cat named Morgan. It is not clear whether Edward Morgan Forster and Thomas Stearns Eliot named their cats after each other or whether this is merely a curious coincidence. Eliot’s association with cats hardly need be mentioned here, beyond noting the fact that we hold his papers, bequeathed by his friend John Davy Hayward (KC 1923).

Forster’s friends in the Bloomsbury set were also ailurophiles. This is clear from such records as the photograph of ‘Sebastian’ Sprott (Walter John Herbert Sprott, shown here sat with the cat), Gerald Heard, EM Forster and Lytton Strachey. This photograph was taken at Ham Spray House where Strachey, Dora Carrington and Ralph Partridge lived. Carrington’s letters to Sprott refer to ‘Puss’, although we don’t know whether that is the cat in the photograph.

In A Room of One’s Own, Virginia Woolf describes looking out the window of a room in a men’s College (in fact it was GHW ‘Dadie’ Rylands’ room at King's College) watching a cat cross the back lawn.  While we do have Dadie’s copy of the book, we do not have any archives relating to this tale. College cats do appear elsewhere in the archives though.

When Oscar Browning (KC 1856, historian and educational reformer) went away, his secretary Fred Harvey wrote to him regularly.  In an August 1896 letter Fred described OB’s cat leaving her screaming kittens on the great court of King’s (where only the Fellows could attend): ‘does she want to get rid of them?’

MR James (KC1882, Provost and ghost story writer) wrote letters to the children of several friends. Sibyl Cropper published some of these in 1939 as ‘Letters to a Child’ in Cornhill Magazine.  The transcript shown below gives an excellent example of his charming stories about birds and cats, illustrating that his talents as a writer extended beyond the genre he is best known for. In this letter, MR James personifies the Provost’s cat, Cato. In 1903, when the letter was written, Augustus Austen Leigh was the Provost.

We are open by appointment four days a week most of the year - please contact us by email or phone to book your visit.
Read more
Catalogue of EM Forster's photographs on ArchiveSearch