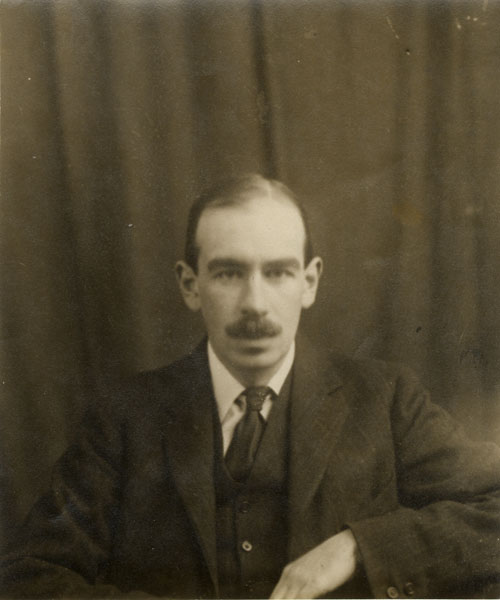 While Kingsmen such as Rupert Brooke were keen to fight in World War One, it is fair to say that not all Kingsmen shared that attitude.

He announced for their benefit that, although he was not a Conscientious Objector, he would conscientiously object to compulsory service. Accordingly, when he received his calling-up notice, he replied on Treasury writing-paper that he was too busy to attend the summons.

During the 1914-18 war I saw a good deal of him, especially during the later part, when he and I, Sheppard and Norton, shared 46 Gordon Square. It seems not generally to be known – though Mr. Roy Harrod has not attempted to conceal the fact – that Lord Keynes was a conscientious objector. To be sure he was an objector of a peculiar and, as I think, most reasonable kind. He was not a pacifist; he did not object to fighting in any circumstances; he objected to being made to fight. Good liberal that he was, he objected to conscription. He would not fight because Lloyd-George, Horatio Bottomley and Lord Northcliffe told him to. He held that it was for the individual to decide whether the question at issue was worth killing and dying for; and surely he was entitled to consider himself a better judge than the newspaper-men who at that time ruled the country…

Elizabeth Johnson’s 1960 article in the Economic Journal describes the process by which Keynes was exempted from military service. Keynes prepared a manuscript statement to the Holborn Local Tribunal claiming exemption from military service on the grounds of conscientious objection to conscription, dated 28 February 1916. Thomas Heath granted Keynes a six month exemption from 2 March 1916 (on the basis of his work in the Treasury) but made it clear he could still make representation at a Local Tribunal.

On 27 March, Keynes wrote to the Tribunal explaining that he couldn’t attend due to Treasury work, though Harrod maintained it was to appease his Bloomsbury friends. On 29 March, the Tribunal informed him that his appeal had been rejected on the grounds that he already had exemption. As Keynes’ work at the Treasury continued, his exemption was extended.

We are open by appointment four days a week most of the year - please contact us by email or phone to book your visit.
Read more
The Papers of John Maynard Keynes on ArchiveSearch