Estates: Lord of the Manors 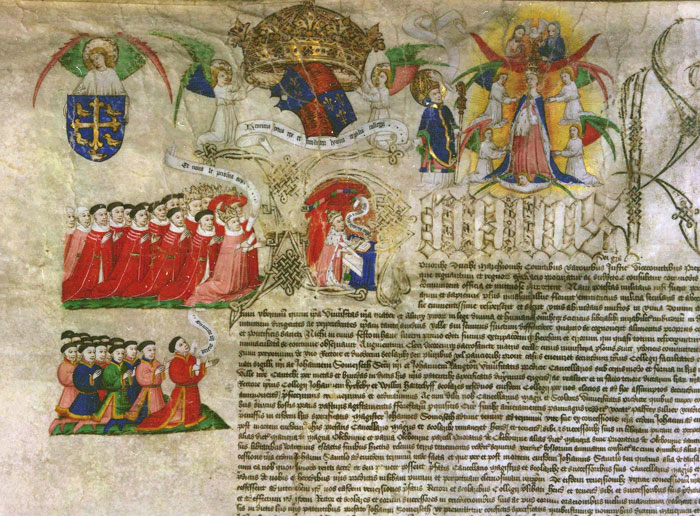 Foundation charter by Henry VI, granting lands and privileges to benefit his College of St. Nicholas and Our Lady at Cambridge, 1446. (KC/18)

When people think of a ‘lord of the manor’ they may think of the head of a landed family, hereditary peers and even popular period dramas. But there is another model: a surprising amount of land was owned by Cambridge colleges, not least King’s College.

The significance of King’s College to its founder, King Henry VI, is perhaps most clearly indicated by the College’s foundation charter. Firstly, the illumination on the first membrane of this extremely large parchment document depicts members of the House of Lords pleading for its foundation, and secondly, it bestowed upon the College an incredible amount of land.

King’s College became the lord of the manor for many of the estates it had been given and those which it subsequently obtained. This title indicated wealth and privilege, and it carried rights and responsibilities.

The lord of the manor had freehold ownership of the land, which could then be leased long-term to others under a system called copyhold (because the owner had a copy of the court roll recording the conveyance).

During the eighteenth and nineteenth centuries land was gradually enfranchised to the tenants (converted into freehold, the model of ownership in use today), but certain manorial rights were often retained.

Rectorial manors came with chancel repair liability, and King’s College still pays for chancel repair in some parishes where they are no longer Lords of the Manor.

The manorial system predates land registry and policing as we know them now, and those duties rested with the Lord of the Manor until recent times. Thus some of our estates records predate the Foundation of the College by centuries.

The Provost and Bursars used to go on ‘circuits’, holding court in all of the manors within a certain region. Court rolls record land ownership, and indicate the role the lord held in administering the customs of the manor, charging fines (inheritance tax) and meting out punishment when necessary.

Although most of our manors have been sold, manorial documents are protected by law and must be preserved. A significant part of our College Archive is dedicated to manorial documents relating to estates scattered around the country, from Prescot (Lancashire) in the north to Ringwood (Hampshire) and Farringdon (Devon) in the south, to name but a few.

The Eastern circuit consisted of numerous estates within East Anglia. In total, our estate papers occupy around 450 boxes and 5 metres of bound volumes, not to mention numerous often very large maps. We welcome local historians from all over England, especially Cambridgeshire and the neighbouring counties, wishing to visit the Archive Centre.

This is intended as a very brief introduction, before focussing on specific manors and showing the variety of manorial documents in the coming months. Detailed introductions to the manorial system and manorial records are given in the ‘useful sources’ listed below or contact the Archive Centre with any questions.

Gallery - Estates: Lord of the manors

Our Heritage Lottery Fund project to improve access to the College's estates records, which form a vital part of the College's history.
Read more

The Archive Centre is open by appointment from Monday to Thursday for most of the year - find out more about making a visit.
Read more
The University of Nottingham’s introduction to manorial documents, including a glossary
Manorial Documents Register
Catalogue of documents relating to King’s College’s estates on ArchiveSearch