Clubs and Societies: the Widor Society 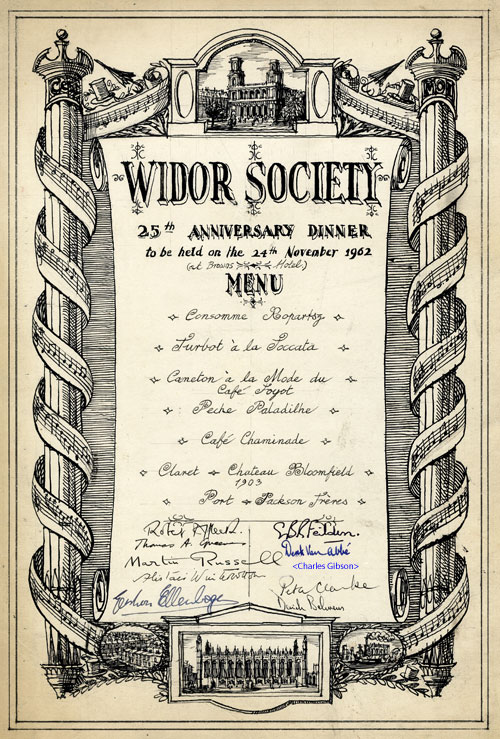 King’s College has a well known association with music, not least due to its renowned choir and the organ recitals that have long taken place in the Chapel. This month’s selection from the archives celebrates Kingsmen's appreciation of the music of Charles-Marie Jean Albert Widor.

Widor was born in 1844, to a family of organ builders. He became an organist, composer and teacher. In 1863 he moved to Brussels to study under Jacques-Nicolas Lemmens. At the age of 25, Widor received the honour of being made 'provisional' organist of Saint-Sulpice in Paris, where he remained throughout his career.

The Widor Society held its first meeting on 31 October 1936. The objects of the society were to 'promote the knowledge and appreciation of the composer M. Ch. M. Widor, and to give publicity to his works, through the gramophone and by any other means'. It was open to all, without subscription. Besides promoting Widor, members of the society put their wit and creativity to work producing sketches, a play, poems and other humorous documents relating to Widor.

Although Widor does not have any direct connection with King’s, his music was clearly very popular among Kingsmen as well as the wider world. The Widor Society’s minute book shows that the membership grew quickly and by 1939 it had members from various colleges. Boris Ord, the King’s College organist, was a member and gave a recital in the Chapel to mark Widor’s 92nd birthday in 1937.

We are very grateful to the families of the late Thomas Affleck Greeves and Derick Jacob Behrens for giving us permission to share these images with you.

Catalogue of papers of the Widor Society on ArchiveSearch