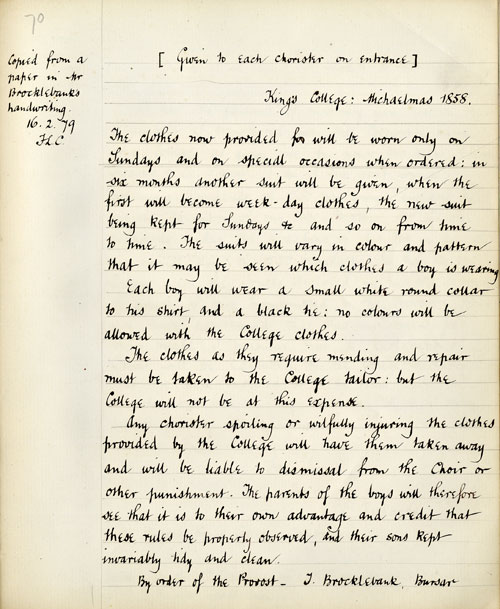 Transcription of a note given to new choristers, on the subject of their attire. (KCHR/3/1/18/1)

We have already seen a few of the ways in which one can tell if a document is authentic, i.e. if the document is what it reports to be, for example a list of King’s students resident in 1696. What if it isn’t authentic?

A small number of the documents in King’s College’s archives are not authentic but may still be reliable. Their reliability depends on such factors as who created them, the purpose for which they were created and whether the creator had access to the original document. A higher degree of reliability is obtained when the transcription preserves old-fashioned terminology or spelling.

Many of our inauthentic records are transcriptions, the majority of which were created by Frederick Lanceley Clarke. He was Bursar's clerk 1872-1920 and Assistant Librarian 1872-1899. Clarke took a great interest in the College’s Muniments and the recorded history of both King’s College and its members. He had a keen eye for historically significant details which he would extract from large series of records and even from relevant documents held elsewhere, which he would transcribe in order for the information to be made available to researchers within the College.

One example of this is his Register of King’s College Matriculations (KCHR/3/1/14), compiled from University records. The images below include the Register entry for the matriculation of Robert Walpole (KC 1696, first Prime Minister of Great Britain). In his Year Lists of Members of Foundation, Clarke compiled a list of members of King’s College from sources which are often challenging to read, for example Mundum books.

FL Clarke often described the source from which he was transcribing, at the top or in the margin. In some cases, he cited the document’s reference number. His citation of A.133 in one transcription means that although that reference number is no longer in use the document could be found in a file relating to disputed land in the Provost's garden. The original document, written on parchment, features the sign manual (signature of the sovereign) of Henry VIII.

In contrast, it is also possible for authentic documents to be unreliable. Those of you who remember ‘old money’ (pounds, shillings and pence) will see that the totals in the two versions of the Billa Expensarum for Bapt. term (summer) 1709 contain mathematical errors which mean that although the documents are authentic, they are not reliable.

We are open by appointment four days a week most of the year - please contact us by email or phone to book your visit.
Read more
F.L. Clarke's writings catalogued on ArchiveSearch