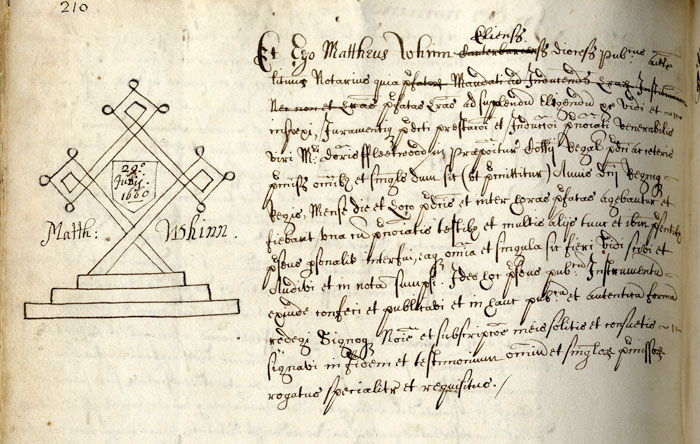 We see signatures every day and most of us will know that seals used to serve a similar function in the authentication of documents. In the 16th and 17th centuries, Notaries Public used distinctive marks which played a comparable role in the creation of authoritative College documents, not least the protocollum books. These books record the admission of new members, senior members and Provosts. They feature some remarkable notary marks that identify the creator of the record and show that he had the authority to create such documents, and they were often rather striking.

In the year 1448, a Bull was given from Pope Nicholas V to Henry VI, the second part of which allowed the College to create Tabelliones, or Notaries. The earliest appointed notaries tended to be Fellows or former Fellows of King’s College.

On 7 November 1864, Rev. T. Brocklebank read a paper to the Cambridge Antiquarian Society in which he suggested that it was largely due to the King’s College Notaries Public that we hold unbroken series of certain important records, such as Protocollum books and accounts. In a sense, the notary was entrusted with the creation of the College’s institutional memory and none of them took that role lightly.

The Notary Public would usually end an entry in volumes such as the Protocollum books with a unique identifying mark. Sometimes this would look like a plain signature but often it would include many stylistic flourishes. The notary’s mark would usually be very close to the bottom line of the entry, ensuring that there was no space for the entry to be tampered with or added to.

In the record of the admissions of a Provost, the notary of the time would generally include a much larger mark, often in the margin, as you can see below. This would be more elaborate than his usual mark.