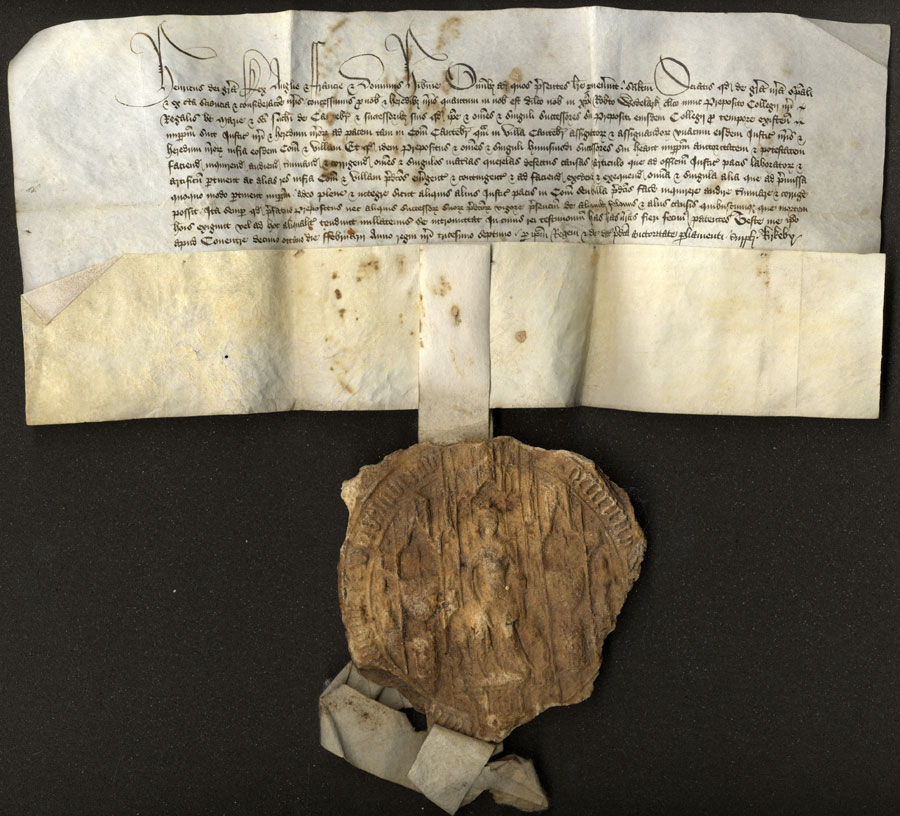 Founder's temporary grant that the Provost be a Justice of the Peace for Cambridge and Cambridgeshire, 18 February 1459. (KC/37)

Diplomatics is the study of the form of a document, such as the paper used, the wax seals, and the signatures. It is often used to ascertain the authenticity and reliability of documents. While scholarly research usually requires wider reading, diplomatics allows you to learn a great deal from the characteristics of individual documents. We begin this year, appropriately enough, with a discussion of diplomatics in dating documents.

Different calendars have been used throughout the centuries. Regnal dates appear in many of the College’s earliest documents. Such dates are usually given in the form of ‘the [ordinal number] year of the reign of [monarch’s name]’. The use of regnal years are seen as early as Anglo-Saxon royal charters in the eighth century.

The document shown at the top of this page is a grant which allowed the Provost to act as a Justice of the Peace. The document starts with the name ‘Henricus’, which we know from the seal to be Henry VI. In the last line we find that it was dated 18 February in the thirty-seventh year of his reign (1458/9).

In the lease below (CAM/111), the date is given as ‘the fourth daye of December in the eight and thirtithe yere of the Reigne of our Souvaryne Ladie Elizabeth’. Elizabeth I’s reign having started on 17 November 1558, the document was created on 4 December 1595.

As you might expect, our collections of Personal Papers tend to feature the more familiar Gregorian calendar and we no longer have to remember when the Queen’s reign started. But there are still cases in which diplomatics are required to determine the dates of documents.

Members of the Bloomsbury group frequently wrote letters to each other, and didn’t always include the date. Sometimes they simply wrote the day of the week. In 1931, the artist Dora Carrington wrote to her friend Dadie Rylands (KC 1912) about the health of her beloved Lytton Strachey. The letter shown below can be dated as mostly likely 27 January 1931. The original postmarked envelope in which the letter was sent has been kept and the postmark date added in pencil on the letter. Similarly, we know that the ‘Sunday’ on Carrington’s postcard was most likely 13 December 1931 because of the postmark. These are examples of postmarks in diplomatics, and of the value of keeping envelopes with letters if they contain additional information.

We are open by appointment four days a week most of the year - please contact us by email or phone to book your visit.
Read more
• Regnal Years on The University of Nottingham Manuscripts and Special Collections website