A Cambridge Secret Revealed: the Apostles 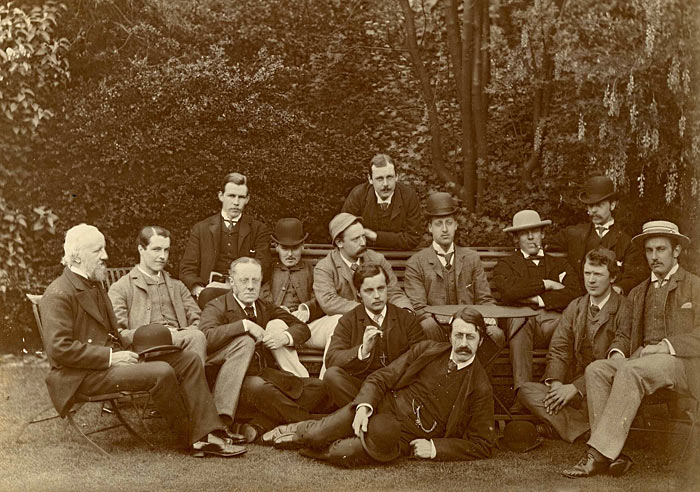 Members of the Apostles in Trinity Gardens (19th century)

This month we take a look at one of Cambridge's best 'unkept' secrets - The Apostles.

The Apostles is a secret society of Cambridge University members that meets to discuss and debate such topics as truth, God, and ethics. The group, also known as the Cambridge Conversazione Society, was founded in 1820 by George Tomlinson. Tomlinson went on to become the first Bishop of Gibraltar.

Most Apostles came from the colleges of St John's, Trinity and King's. Since the 1970s the Apostles have invited select women to join the group. The origin of the Apostles' nickname dates from the original membership of 12.

One does not simply join the Apostles, and in the early days election had to be unanimous. A 'potential' candidate did not know he was proposed until he was accepted. At his initiation a new recruit would be briefed on the Society's history and traditions, sign 'The Book' (a leather bound diary which all previous members had signed) and swear a 'curse' or vow of secrecy.

Active (and usually undergraduate) members are known as Apostles, and former members such as graduates or fellows are referred to as Angels. Every few years, amid great secrecy, all the Angels are invited to dinner at a Cambridge college or London venue.

Despite its University foundations the group's influence went well beyond Cambridge, and many eminent Victorians, Edwardians, and Georgians belonged to it. Since its foundation the society has included some of the most influential men in British public life: John Maynard Keynes, Leonard Woolf, Lytton Strachey and his brother James, GE Moore and Rupert Brooke were all Apostles. Many members of the Bloomsbury group were also Apostles: Keynes, Woolf and Lytton Strachey being the best known of them.

At its core the society is a discussion group. Early members met Saturday evenings in college rooms where Whales (sardines on toast) and coffee were served. The assigned speaker delivered his paper, following which the subject was opened for debate and members voted. It was a point of honour that the question voted on should bear only a tangential relationship to the matter debated.

Immediately following the vote, lots were drawn to select the next topic and speaker for the following week.

The Apostles retain a series of leather diaries of the membership, 'The Book', dating back to the group's foundation in 1820. These books include manuscript notes relating to the topics discussed at the weekly meetings. The Book sets out a list of strict rules enforcing attendance and ensuring consistency. Members who failed to present a promised paper were fined.

The Book was stored in a cedar chest referred to as the Ark. The Ark was paid for and designed by Kingsman Oscar Browning in 1886. The Ark is currently stored in the Archive Centre reading room.

The Archive Centre holds a collection of papers and membership books from the society's foundations to 1930. Featured below are images of some of these items.

Votes for debate on laughter.

We are open by appointment four days a week most of the year - please contact us by email or phone to book your visit.
Read more
Anthony Blunt (Oxford DNB)
Catalogue of the papers of John Maynard Keynes (ArchiveSearch)