How do I know if I'm the right standard for King's Choir?

Choral scholars at King's come from many different backgrounds, and whatever you (or your school) think of your ability, it is always worth making an enquiry or application. The Choir's director, Daniel Hyde, is always happy to answer questions from prospective choral scholars. He can be contacted at choir@kings.cam.ac.uk or 01223 331224.

Do I have to be a first-rate sight-reader?

No – you will be doing a lot of sight-reading as a choral scholar, but we’re more interested in potential.

Were all choral scholars choristers when they were younger?

No. Some were, but many weren’t.

Is King’s looking for a particular ‘type’ of voice?

Other than countertenor, tenor or bass, no: there is no one ‘type’ of voice we are interested in. Some choral scholars have perfect pitch and excellent musicianship skills, while others have big voices which are clearly going to go on to fill opera houses – these qualities are not, of course, mutually exclusive!

King’s is a relaxed, tolerant and informal community, in which all views are respected. It has excellent music resources, including the renowned Rowe music library; the College owns two Steinway grands and an excellent harpsichord; and, of course, we offer one of the finest buildings in the world in which to sing.

What new performing opportunities does the Choir currently get?

You would be arriving at King’s at a very exciting time in the Choir’s history: our own record label is one of the fastest-growing independent classical labels, winning acclaim for its "impeccable" catalogue, and our own ‘home’ series of Concerts at King’s and Easter at King’s have attracted world-class performers to perform with the Choir in the Chapel, including Bryn Terfel and Andreas Scholl. The Choir’s interests are managed by the leading London agency, Intermusica, which continues to secure exciting engagements throughout the world.

How do I apply?

See our step-by-step instructions for applying to King's as a choral scholar on the Choral Awards page. Don't forget that the Choir's director, Daniel Hyde, is always happy to hear from those considering choral scholarships to King's.

Who can I contact to ask questions about the application process?

The Choir's director, Daniel Hyde, is always willing to answer questions from candidates. You can email or phone him at choir@kings.cam.ac.uk.

What subjects can I apply for with a choral scholarship?

All subjects are compatible with a choral scholarship at King's with the exception of Medicine and Architecture.

Can I/Should I take a gap year?

There is no requirement either way regarding gap years; some Choral Scholars at King’s have taken gap years, part of which they used to further their singing before coming to King’s. It is important to consider how your gap year will prepare you both for your subject course and a choral scholarship at King’s, and you may find it a topic of conversation as part of the interview and audition process.

How can I best prepare for the audition?

As well as performing a prepared piece, you will be asked to undertake some sight reading and ear tests. The sight reading will most likely include sixteenth-century polyphony (probably in Latin), and so it may be helpful to consider music by composers such as Byrd, Tallis and Palestrina in your preparation for this section. For the ear tests, you may be asked to undertake exercises such as recognising intervals, singing particular notes in a chord, or singing back a short melody played to you. You may find the aural tests page on the University website useful - see the links at the bottom of the page.

Will being a choral scholar take up all my time?

No. The Choir does require a significant time commitment – usually a couple of hours a day in the early evening during term time. Most of the additional commitments, such as concerts, tours and recordings, take place outside term time, enabling King’s Choral Scholars to achieve high success with academic work and engage in other activities. Recent Choral Scholars have included Rugby and Squash Blues, with one playing at Full Back in the Varsity Match at Twickenham. Choral Scholars enjoy an active social life both within and outside the Choir.

How many services a week does the Choir sing?

The Choir sings Evensong Tuesday-Sunday, with Eucharist or Matins on Sunday morning. Monday is a day off.

What sort of music does the Choir typically sing?

The Choir performs a vast and varied repertoire music spanning 8 centuries, from mediaeval Gregorian chant, to 21st century commissions. You may find that the current term’s music list will give you an idea of the sort of music to expect over the course of a term.

What are the Choir’s major annual events?

In addition to regular tours, recordings and concerts, King’s has a number of regular high-profile events. These include the live radio broadcast of the famous Festival of Nine Lessons and Carols, which is heard by tens of millions of people around the world. There are also the television broadcasts of Carols from King’s and Easter from King’s, as well as the Choir’s own annual Christmas concert at the Royal Albert Hall with the Philharmonic Orchestra.

Where else does the Choir perform?

Tours have lately taken the Choir to China, Japan, Singapore, Hong Kong, South Korea, and other countries in the Far East; the Choir regularly visits the USA and Australia (most recently in 2019) and has been to Canada, South Africa, Bermuda, Brazil, and across Europe. Closer to home the Choir has also sung at a number of recent Proms; the Royal Festival Hall, the Royal Albert Hall, the Barbican Centre, St John’s Smith Square and Kings Place are also regular venues, as are Symphony Hall, Birmingham, Bridgewater Hall, Manchester, The Sage, Gateshead and St David’s Hall, Cardiff.

How much of my holidays will I spend with the Choir?

In September the year’s schedule is published, giving choral scholars the opportunity to organise upcoming vacations around Choir commitments. The senior choral scholar is a member of the committee which helps the Director of Music to plan the Choir’s schedule carefully, ensuring that choral scholars get plenty of downtime.

What are the Choir's commitments at Christmas and Easter?

The Choir has commitments during December, which culminate in the Christmas morning service, but there are plenty of free days too. Choral scholars are not required to stay in College on days outside term during which there are no Choir commitments. Tickets for major services (including the Eucharist on Christmas Day) are made available to friends and family of choral scholars. At Easter the Choir is required for part of Holy Week and up to Easter Day.

Will I need accommodation in Cambridge during the holiday?

Accommodation is provided free of charge by the College outside of term time when the Choir is performing and a daily living allowance is paid. Travel expenses incurred in connection with the Choir’s activities outside term time are reimbursed.

The choral scholarship itself is worth a token £100pa but choral scholars derive a more significant income from the fees that are paid for concerts tours, recordings and broadcasts. In addition, all expenses incurred in connection with these are reimbursed. There is also an annual grant to assist with the purchase of books and music, and singing lessons, Alexander Technique lessons, and masterclasses are funded by the College.

In addition to the choral scholarship, the College pays for singing and Alexander Technique lessons, as well as a programme of workshops with distinguished singers and ensembles. Justin Lavender and Russell Smythe, both distinguished professors of vocal studies at the Royal College of Music, currently teach the choral scholars. We also have a programme of masterclasses for King’s choral scholars: recent instances include Ben Parry (of the Swingle Singers), Bob Chilcott and Paul Phoenix (both of the King’s Singers) on close harmony singing, Rogers Covey-Crump on pitch and intonation, Andreas Scholl on the countertenor voice, James Bowman on communicating with audiences, the Hilliard Ensemble on renaissance repertoire, Geoffrey Mitchell on declamation in recitative, Stephen Varcoe on French and German pronunciation, and Berty Rice on strategies for dealing with nerves in performance.

What other music can I get involved in?

King’s Choral Scholars have a high profile in the Cambridge music scene. Choral scholars have recently taken part in performances ranging from the title role in Don Giovanni to conducting Guys and Dolls; they direct shows and put on concerts in a wide variety of musical styles. There is also the choral scholar close-harmony group "The King's Men".

Under the name "The King's Men", the King's choral scholars have a concert, touring and recording programme of their own, performing in a variety of styles including close harmony. The group, which is run by the choral scholars themselves, generates a valuable additional income for its members, as well as providing useful opportunities for choral direction and business management. The group also raises money for charitable causes. In recent times the group has performed alongside high-profile artists such as Rapper, Dizzee Rascal and the King’s Singers. Membership of the group is optional, but most choral scholars hugely enjoy being part of this.

Where do choral scholars continue their musical life after King’s?

Nearly every year King’s choral scholars leave Cambridge to take up scholarships on opera courses at the Guildhall, the Royal Academy and the Royal College. The professional music world is full of King’s alumni, ranging from Sir Andrew Davis, Sir John Eliot Gardiner and Edward Gardner in the conducting world to the late Robert Tear, Gerald Finley and Michael Chance in singing, to Simon Preston, Thomas Trotter, David Briggs and David Goode in the world of organ-playing. Some have made a career as instrumentalists - Joe Crouch is one of the top continuo cellists in the early music scene - and some, such as Francis Grier and Bob Chilcott, as composers.

Where might I go after King’s to continue my vocal studies?

Many choral scholars keep up their singing by freelancing in London; some go into various singing groups (the King’s Singers or the Swingle Singers, for example). Those wishing to enter the world of opera often take their studies further at music college, and there is a steady stream of former King’s Choral Scholars taking up scholarships at the Royal College, the Royal Academy and the Guildhall. King’s alumnus Andrew Kennedy won the Cardiff Lieder Singer of the Year competition a few years ago.

What if becoming a professional musician isn’t for me?

King’s choral scholars leave Cambridge to go into any number of different careers, including teaching, the armed forces, journalism, the law, the Foreign Office and Civil Service; there have recently been former King’s choral scholars working in 10 Downing Street and at Buckingham Palace! Some combine their musical interests with their careers by moving into arts management. A choral scholarship imparts skills that are beneficial far beyond the walls of the chapel; skills that are recognised by potential employers in many different sectors and industries.

Meet some of our Choral Scholars and find out what made them choose King's, and how they've found their time here so far.
Read more

If you are a good singer and you would like to study at King's you may be eligible for a Choral Award with the Choir or King's Voices.
Read more

From the Director of Music to the vocal coaches, there is ample support available to help our Choirs improve their craft.
Read more
The King's Men website
Aural Tests (University Website) 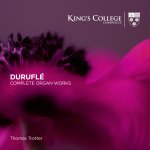 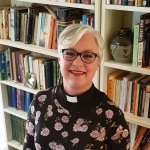 The Reverend Dr Mary Kells will be joining the College in September as our new Chaplain. 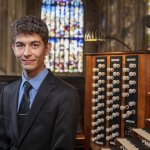