History of A Festival of Nine Lessons and Carols 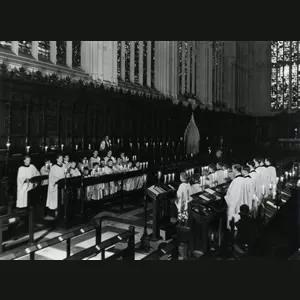 AC Benson recalled: ‘My father arranged from ancient sources a little service for Christmas Eve – nine carols and nine tiny lessons, which were read by various officers of the Church, beginning with a chorister, and ending, through the different grades, with the Bishop.’ The suggestion had come from GHS. Walpole, later Bishop of Edinburgh.

Almost immediately other churches adapted the service for their own use. A wider frame began to grow when the service was first broadcast in 1928 and, with the exception of 1930, it has been broadcast annually, even during the Second World War, when the ancient glass (and also all heat) had been removed from the Chapel and the name of King’s could not be broadcast for security reasons. Sometime in the early 1930s the BBC began broadcasting the service on overseas programmes. It is estimated that there are millions of listeners worldwide, including those to Radio Four in the United Kingdom. In recent years it has become the practice to broadcast a digital recording on Christmas Day on Radio Three, and since 1963 a shorter service has been filmed periodically for television. Recordings of carols by Decca and EMI have also served to spread its fame.

In these and other ways the service has become public property. From time to time the College receives copies of services held, for example, in the West Indies or the Far East and these show how widely the tradition has spread. The broadcasts, too, have become part of Christmas for many far from Cambridge.

One correspondent writes that he heard the service in a tent on the foothills of Everest; another, in the desert. Many listen at home, busy about their own preparations for Christmas. Visitors from all over the world are heard to identify the Chapel as ‘the place where the Carols are sung’.

Wherever the service is heard and however it is adapted, whether the music is provided by choir or congregation, the pattern and strength of the service, as Dean Milner-White pointed out, derive from the lessons and not the music. ‘The main theme is the development of the loving purposes of God ...’ seen ‘through the windows and words of the Bible’. Local interests appear, as they do here, in the bidding prayer, and personal circumstances give point to different parts of the service. Many of those who took part in the first service must have recalled those killed in the Great War when it came to the famous passage ‘all those who rejoice with us but on another shore and in a greater light’. The centre of the service is still found by those who ‘go in heart and mind’ and who consent to follow where the story leads.

TO-NIGHT ungather’d let us leave
This laurel, let this holly stand:
We live within the stranger’s land,
And strangely falls our Christmas-eve.

Our father’s dust is left alone
And silent under other snows:
There in due time the woodbine blows,
The violet comes, but we are gone.

Let cares that petty shadows cast,
By which our lives are chiefly proved,
A little spare the night I loved,
And hold it solemn to the past.

But let no footstep beat the floor,
Nor bowl of wassail mantle warm;
For who would keep an ancient form
Thro’ which the spirit breathes no more?

Be neither song, nor game, nor feast;
Nor harp be touch’d, nor flute be blown;
No dance, no motion, save alone
What lightens in the lucid east

Of rising worlds by yonder wood.
Long sleeps the summer in the seed;
Run out your measured arcs, and lead
The closing cycle rich in good.

A Festival of Nine Lessons and Carols

A Festival of Nine Lessons and Carols is the Christmas Eve service held in King's Chapel.
Read more

A Festival of Nine Lessons and Carols Archive

An archive of service booklets for Nine Lessons dating back to 1997.
Read more

Carols from King’s is televised on BBC Two on Christmas Eve and is a different service to A Festival of Nine Lessons.
Read more

Easter at King’s is an annual festival of services, concerts and talks in the College over Holy Week and Easter.
Read more
A Festival of Nine Lessons Order of Service (1918)