King's provides a relaxed and friendly environment where it's easy to meet people. When new students arrive each year, we have a Freshers' Week designed to welcome them and ease them into College life. More generally, King's is a fairly small community with lots of events and activities throughout the year, so there are plenty of opportunities for friendships to develop. Students from all backgrounds quickly feel at home in College.

The informal nature of King's makes it easy to join in with activities around the College. You may already have particular interests or you may want to try something new. College activities are very friendly and inclusive, so it's easy to just turn up and find plenty of others who share your enthusiasm. King's has a wealth of societies and college activities. Here are some of the most popular ones:

The King's Art Rooms exhibit work by students and local artists. You can also go to classes in life drawing, drawing and painting, and digital art. Or you can use the rooms to work on your own projects. The College runs an annual art competition and has an extensive collection of artwork, some of which can be borrowed by students.

If you're interested in photography, King's has an underground Dark Room and provides chemicals and other equipment for processing negatives and printmaking. There is access to high quality enlargers and a range of papers, toners and editing equipment, all free of charge for society members. All users must first attend an induction session held by the more experienced users on techniques and good practice. After that, students are encouraged to make full use of the facility and there's a good number of people in college you can ask if you need help with something. As well as being used by King's students, the University Photographic Society often meets at King's and uses the facilities.

The Art Centre consists of two rooms - a large flexible space for exhibitions or workshops and a smaller room serving as an artist’s studio.
Read more

The King's Drama society puts on plays in different locations around the College including Keynes Hall, the Bunker and the Fellows' Garden. Performances are open to the general public as well as students. If you're interested in theatre, you can get involved in all parts of the productions, both on and off the stage. King's Drama have staged productions such as Jean-Paul Sartre's No Exit, Noel Coward's Blithe Spirit, and Peter Shaffer's The Gift of Gorgon, as well as one-night monologue showcase events. King's students are also regularly involved in productions elsewhere in the University, including those staged at the ADC Theatre or the Corpus Playroom.

King's Film Society, free to College students, holds regular screenings in King's during term-time. There are several meeting rooms in College with projector, screen and audio equipment. More generally, King's College Student Union has a projector which can be borrowed by students, as well as a wide-ranging DVD collection.

King's College Music Society (KCMS) is one of the most vibrant and high-profile music societies in Cambridge. King's students cover a huge range of music each year, organising large-scale orchestral concerts each term, held in the stunning, world-famous Chapel, as well as quirky and intimate concerts in the Provost's drawing room. One highlight of the year is the May Week Chapel Concert, which features the combined forces of the KCMS Orchestra, King's College Choir and King's Voices. There's always a great party on the back lawn afterwards too.

For singers, King's College Choir is one of the world's best known male voice choral groups. It is made up of sixteen choristers and fourteen Choral Scholars (six basses, four tenors and four counter-tenors), and sings daily services in the Chapel as well as performing all over the world and doing radio and TV broadcasts. The Choral Scholars also have an a cappella close harmony group called The King's Men.

King's Voices is the College's mixed-voice choir. The group sings Evensong in the Chapel on Mondays, and puts on two major concerts sponsored by King's College Musical Society (KCMS), guest appearances in Ely Cathedral and elsewhere, performances at College dinners, etc. Each year there's a King's Voices tour, usually in the Easter vacation. As well as singing together, the choir is outgoing and sociable as a group. Rehearsals and Evensong are usually followed by a drink in the bar and at least once a term there is a dinner party.

King's has a very active music scene, and a wide range of music is performed and enjoyed by students, staff and Fellows alike.
Read more

Sports at King's range from traditional Cambridge activities such as rowing and cricket, to sports such as volleyball, water polo and mixed netball. Whether you prefer team sports or individual pursuits, there should be something for everybody.

King's Boat Club is the largest sports club in the College. There are several crews competing at different levels and beginners are very warmly welcomed. Many people start as novice rowers. The technique is not too difficult to pick up, and learning to row can be a lot of fun as well as great exercise.

King's also has a dedicated mountaineering and kayaking society which runs climbing sessions during term and provides kayaks for students to use on the river Cam (which runs through King's). The society runs training sessions where you can learn new skills so it doesn't matter if you've not got much experience. Most importantly, there are very popular trips during the vacations, enabling students to enjoy camping, kayaking, climbing, hiking and other outdoor activities in more challenging scenery.

Whether you prefer team sports or more individual exercise, you'll find lots of fun ways to keep yourself fit and healthy at King's.
Read more

A good number of subjects at King's have societies in College or occasional seminars, with invited speakers, opportunities to present and discuss student research, and social and networking events bringing undergraduates, graduates and researchers in College together for meals or drinks. These include the King's Law Society, The Biology seminar series, The Maths and Physics society, and the History society. All subjects also have societies at university level, bringing people with mutual interests from different Colleges together.

King's Politics brings top political speakers to King's, giving students and academics alike an opportunity to listen to, engage with, and challenge some of the most prominent movers and shakers. The society actively encourages students from across Cambridge to engage in stimulating, thought-provoking and exciting events.

Students organise their own live music evenings in the bar, as well as popular dance nights, debates, film screenings, charity fundraisers, quiz nights, and summer barbecues, so there is always plenty going on. Many events take place in The Bunker, a student-led venue at King's which offers a versatile underground space used for music, comedy, theatre and all sorts of other events as well. The venue is run by a Bunker Committee of King's students, who put on great events through the year, with good music and cheap prices.

At the end of the autumn and spring terms there are large parties (called 'Mingles'), and at the end of the year students put on a Funday and the 'King's Affair', which is like a May Ball but much less formal. The dress code is relaxed and you can chat on cushions in the courtyards, listen to different kinds of music in rooms around College, have a go on bumper cars or the bouncy castle, and get food. Basically, it's a huge all-night party with your friends.

The catering department lay on weekly 'Formal Halls'. These are special dinners which make the most of the atmospheric College Hall and are a good occasion for inviting friends from other Colleges. King's Formal Halls are very popular events, and tend to sell out quickly! Less regular events include the annual Women's Dinner, which brings students, Fellows and female alumni together to celebrate the presence of women at King's. The event includes talks and discussion, as well as a formal meal together in Hall.

On the academic side, both students and Fellows organise a large number of lectures, seminars, and conferences throughout the year. King's is also a busy venue for public events such as concerts and art exhibitions. The concerts are normally held in the Chapel or Hall, and you can usually get student discounts on the tickets.

From talks and seminars with leading politicians and journalists to lessons in belly dancing, salsa, zumba and yoga, King's maintains a proud tradition of involvement in all aspects of University life. For students wishing to get more involved in the life of the College, there are opportunities to join the King's College Student Union (KCSU), which represents the interests of undergraduate students at King's. The executive committee includes a range of roles dealing with topics such as student welfare, the environment, entertainments, and international students. King's College Graduate Society (KCGS) organises events specifically for graduates, from events in College to trips away from Cambridge.

There are also lots of opportunities for students who want to be involved in widening participation and providing accurate information for prospective students from all backgrounds. The Admissions Office sends emails asking for student volunteers to help with school groups and Open Days. You can be on an undergraduate panel answering questions in front of sixth formers, take tour groups around King's or chat with visitors over lunch about student life. The KCSU Access Officers co-ordinate student volunteers for the interview week helpdesk in early December and the Shadowing Scheme where sixth formers stay in King's and 'shadow' a student studying their subject. They also lead the King's Access Bus, a group which visits schools in the Middlesbrough area after Cambridge term has ended for Easter, running sessions for Year 10 pupils.

King's is well-known for having an involved student body which actively participates in the decision-making of the College - find out more.
Read more

The Access Bus is an outreach initiative which sees King's students travel to the College's catchment area in the North East.
Read more 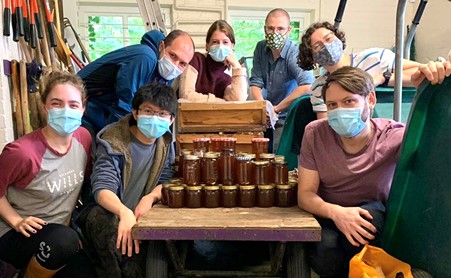 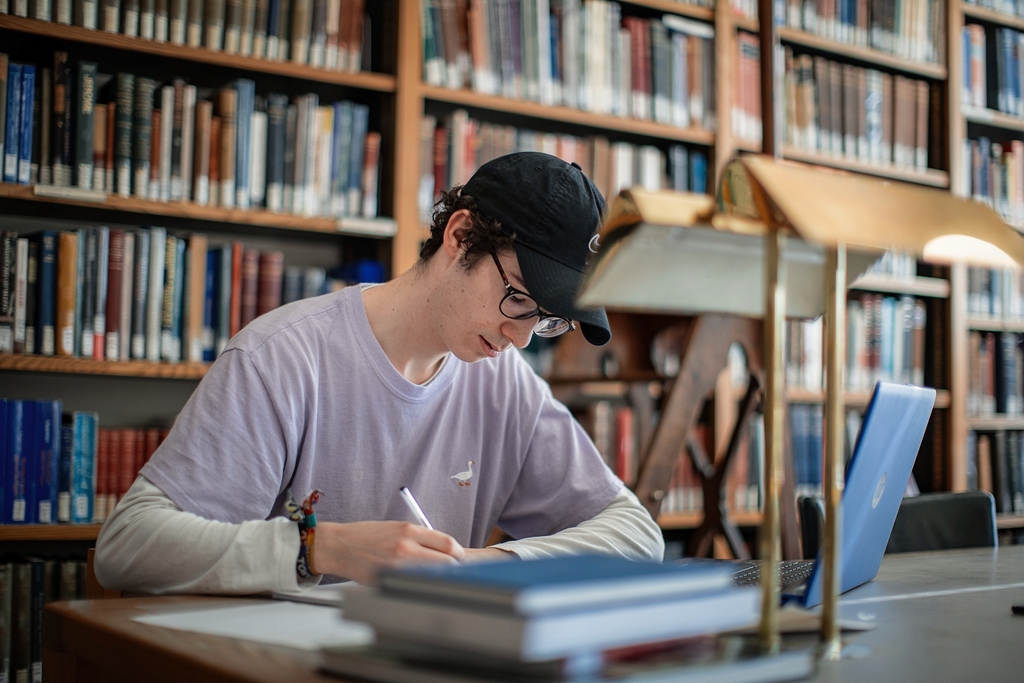