The King's College of Our Lady and St Nicholas in Cambridge was founded in 1441 by King Henry VI and munificently endowed. The Founder's statutes provided for a Provost and seventy poor scholars. Scholarships were restricted to Etonians, but a few pensioners and Fellow commoners from other schools were admitted from the middle of the sixteenth century. By the statutes of 1861 open scholarships, financed by the Fellows greatly reducing their dividends for many years, were founded, and since then pensioners and scholars from other schools have been admitted in increasing numbers. Until 1853 students at King's were exceptional in being awarded University degrees by the College.

The original site of the College lay to the north of the current College, between the present Chapel and Senate House Passage.

The first College buildings were begun in 1441 on what is now the site of the western quadrangle of the Old Schools. Only the south and part of the west sides of this old Court were completed to the intended design: the rest was hastily finished when the King began to build a larger court on the site further south; but until 1828 the Old Court provided nearly all the undergraduate College rooms.

It was then sold to the University, which demolished most of it apart from the gateway arch opposite Clare College.

In 1443 King Henry began to buy up the site of the present Front Court and Back Lawn. This was a built up part of the town with shops, houses, several university hostels, the parish church of St JohnZachary, and the original site of Godshouse (now Christ's College). He had always meant the College to be built south of the Chapel but this was prevented by shortage of money and the Wars of the Roses. However, he acquired ground across the river, including Scholar's Piece, the walks beside Queen's Road as far as Garret Hostel Lane, and the site of Clare gardens (ceded to Clare in the seventeenth century). In 1805 the College acquired the ground beyond Queen's Road now occupied by the Fellows' Garden, the Garden Hostel and King's College School. The land where the University Library stands was King's and Clare's sports ground at one time, but was sold to the government for a temporary hospital during World War I.

On his new site east of the river, King Henry planned three domestic ranges closing up to one another and, on the north side, to the Chapel, to form the new court. Between the Chapel and the river there was to be a cloistered cemetery and a bell tower. He laid the foundation stone of the Chapel in 1446; but the work came to a standstill, when he was deposed in 1461, with the Chapel only about 60 feet high at the east end sloping away to about six at the west, and still temporarily roofed. The Founder's stonework in the Chapel is recognisable by being white (magnesium limestone from Yorkshire), while later work is in Northamptonshire sandstone. Only the east range of the domestic buildings was begun; its foundations are still there under the lawn and can be seen in very dry summers.

Work on the Chapel was resumed in 1476, and by 1485, with the help of contributions from Edward IV and Richard III (rather surprisingly as both were Yorkists), the five eastern bays had been built and roofed. Then the work stopped again until 1508, when Henry VII provided funds and promised to see the Chapel finished. The fabric with its superb fan vaults was completed after his death, in 1515; by 1544 it had been fitted out for use, largely at the expense of Henry VIII who gave the magnificent windows, the rood screen (on which the organ was placed after the Restoration) and the stalls in the Choir.

In 1961 Rubens' painting of The Adoration of the Magiwas presented by the late Major A. E. Allnatt and the east end of the Chapel was radically altered to house it.

In 1724 James Gibbs redesigned the front court, but was able to only build the west range of his scheme, the present Gibbs Building. The court was not finished until 1828, when William Wilkins built the screen (where the old Provost's Lodge and Choir School had been) and gatehouse, 'A' and 'D' staircases, the Hall, the Library, and what is now the Old Lodge, his preference for the classical style being overruled by the College's `modern' insistence of Gothic Revival.

Bodley's, the Provost's Lodge and part of Webb's Court stand on what was once a garden belonging to the Carmelite Friars, which the College bought in about 1542. When numbers began to grow after the new statutes of 1861, buildings were added here. In 1873 Sir George Gilbert Scott built the range along King's Parade between Wilkins' Building and King's Lane. The east and south ranges of Bodley's Court were completed in 1893 and Webb's Building (O, P, Q, R) in 1909 (the top floors of Webb's were added in 1957 by David Roberts). In 1927 Kennedy added a north range to Bodley's (S and Y) and built the present Provost's Lodge in Webb's Court. Part of X staircase was added to Bodley's by Sir William Holford in 1955.

The Keynes Building, the largest scheme undertaken by the College for a century and a half, was completed in 1967.

Designed by James Cubitt and Partners, it contains a small concert Hall (Keynes Hall), meeting room (The Chetwynd Room), the Research Centre, over seventy bed-sittingrooms, new kitchens and other amenities. At the same time the ground floor of the east end of the Wilkins Building was made into a new Common Room, including a reading room, a bar and a television room, and the Hall was renovated.

From the beginning the Provost was, in theory, elected by the Fellows but until 1689 every Provost was in practice nominated by the Crown. In 1689 however, the Fellows succeeded in asserting their rights by refusing to accept William III's nominee, Isaac Newton of Trinity.

History of the Gardens

It is possible to trace back to the sixteenth century some avenue-planting of ash, elm and walnut on the College lands that we now call the Backs. By 1690 there were College gardens on both sides of the river, some of which – a bowling green, a hop yard and an area for a pigeon house – had important practical functions, whilst others were more obviously pleasure gardens, such as the small one for the use of the Fellows. When King's began the construction of the Gibbs Building in 1724 it employed the famous landscape designer Charles Bridgeman to draw up a plan for the land west of the river to accompany the new building. Plans show a central basin of the river occupying much of the ground where Scholars' Piece is today, and its formal design was in keeping with the classical style of the Gibbs Building. Although the scheme was not carried out, it remained the intention of the College to treat its Backs as an amenity.

The Back Lawn dates back to 1772 when the College voted for further improvement of the Chapel yard to the west of Gibbs by "laying down the same with grass seed and afterwards feeding it from time to time with sheep as occasion may require in order to get into good and ornamental condition; to complete the gravelling (of) the Walks..., and not for the future to put any house there". From then on, amenity rather than practical value decided the treatment of the whole Backs area. Nevertheless, in one important respect, amenity does not completely dominate.

Sheep may have been the most appropriate way to mow the lawn before the advent of the mechanical lawnmower in 1831, but the Provost and Fellows owned horses essential for their local transport, and provision had to be made for grazing them. Today the cows carry out a similar function in a rather more decorous manner.

The original Fellows' Garden, a small enclosure on the east bank of the river disappeared with the construction of the Back Lawn and it was not until the renewed building activity of the 1820's and 30's that a new and larger garden replaced it. In 1836 the College agreed to plant the nearest field on the west side of Queen's Road for use by the Provost, his family and Fellows. In 1851 Provost Okes consented to the Provost's close being converted to a "Fellows' pleasure ground" and in 1852 the College agreed to appoint a gardener to look after it. Today, with its relatively informal shapes and pleasing groups of mature trees and lower growing shrubs, the Garden is a typical Victorian design. Its appearance has not changed much in the last hundred years, although when the Garden Hostel was completed in 1950 suitable screen planting of new trees and shrubs were carried out on the west side of the Garden. Use of the Garden by junior members was allowed by the Governing Body in 1935.

The College grounds are open to the public as detailed in the information for visitors and the Fellows' Garden is usually open as part of the National Gardens Scheme one Sunday afternoon in mid-July. 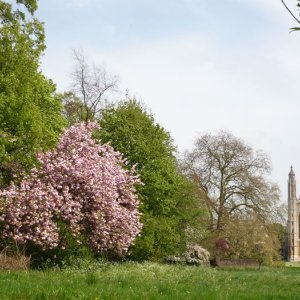 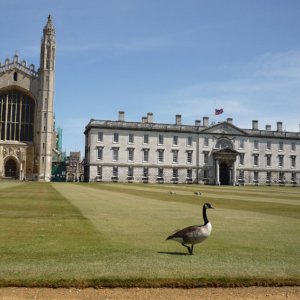 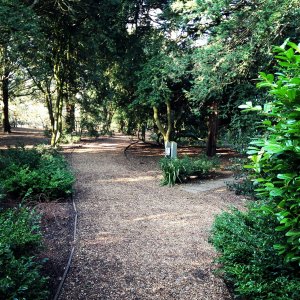 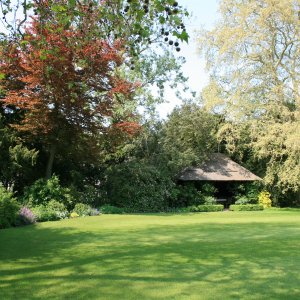 The first female Fellow of King's was elected in 1970 and female students were first admitted to King's in 1972.

For further information about the history of the College, see the chapter on it by John Saltmarsh in the Victoria History of the County of Cambridge, (the link to which is below) Volume III (1959). You can find a privately printed edition of the chapter under the title of King's College: A Short History in the College Library. In addition, there is a booklet with the same title by Christopher Morris. See also the Royal Commission on Historical Monuments in the City of Cambridge (1959).

Guide to the College Archives

From its foundation in 1441 to the present, King's has preserved records of its internal administration, its construction, and the lives of its members.
Read more

Links to our online guides and exhibitions, as well as our "Introduction to Archives" - a beginner's resource for school pupils.
Read more

History of the Chapel

King's College and its famous Chapel were founded by Henry VI in 1441, when the King was only 19.
Read more

The Archive Centre is open by appointment from Monday to Thursday for most of the year - find out more about making a visit.
Read more
Victoria History of the County of Cambridge